Prepare For Change
Home ARCONTES The Agenda to Eliminate All Strong Males…..Documented and Proven 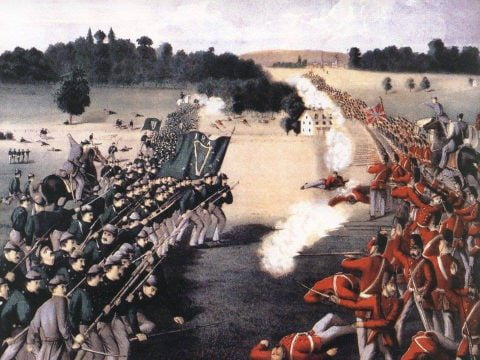 It doesn’t matter if it was the American Civil War or another historical war between France and Britain etc, the first time you witnessed two armies standing straight up and firing at each other point blank, you said to yourself, “that’s a really stupid way to fight.“. And it is of course and you were completely correct………and then the “government” teacher told you something else and you started to doubt your own innate intelligence. We were told as children (or at least I was in a private school for boys in NFLD) that this fighting style was about honor, valor and because guerrilla warfare (like ambushing your enemy) was viewed as a “dishonorable” way to conduct oneself as a gentleman. Isn’t dying, when you could avoid it, a really ineffective way to win a war? If you really wanted to win the war, why not just ambush the enemy? This is a prime example where we as children outsourced the obvious truth to an equally obvious lie, which made no sense then and of course makes no sense now. Here’s why such a battle strategy really existed and there’s much more to this hidden agenda than meets the eye. In fact you could say that this hidden agenda is the corner stone of everything written about on this page. There’s something more than a little fishy going on with this battle strategy……..something extremely sinister, dark and ancient in origin.

Documents seized from a secret courier of the Bavarian Illuminati in the late 1700’s exposed that a small group of men had sinister intentions for ruling the world. The documents seized showed the step by step plan as to exactly how they would executed this dark agenda through the centuries. First of all the strongest men had to be eliminated, in order to leave a thick syrup of the most mentally and physically weak in each geographic region. The primary method by which this would be executed would be to systematically and covertly take over the goverment of each nation and then fabricate manufactured situations to draw each country in sequence into false wars. Although each different country would be controlled by the same invisible hand, the idea of each country being different, had to be imprinted into the psyche of each culture, in order to get the strong humans to kill each other off. The primary method used to manipulate the humans in this manner were different country names, different flags, fake borders, passports and events like the Olympics, the World Cup etc etc. These orchestrated events made sure that the uninformed humans believed that the countries were different, run by different people, reflective of the will of the people living there etc etc. Nothing could be further from the truth and this is a ORCHESTRATED PSY-OP. By controlling both sides in each war, from the top level of the ruling pyramid, this small group of men could literally sacrifice millions of the strongest males per year all around the world. By making sure the strongest humans are culled and the weakest remain, there would be little to no resistance to this tyrannical plan long term. The perpetual wars never stop because they were never designed to stop. As our strongest and bravest are indoctrinated and programmed to sacrifice themselves in fabricated wars (by media, government and the education system), the controlling tyrants understand that the time to strike at the weak sheep who remain, draws near. The evil men I allude to will “reveal” themselves, when no strong males remain to resist them. We’re dangerously close to this point in history, as the rise of the pleasuring seeking, self centered, beta male is manifesting at light speed. Proof of one invisible hand controlling all countries at this added link. http://bit.ly/2kbXwCq

The strategy of having men stand up (as pictured above), point blank and shoot each other in the face, was never an accident or misunderstanding of war strategy. It was an orchestrated agenda and the strategy intended was the strategy executed. You were always correct in thinking, “that’s a stupid way to fight“. Just like when you initially watched the twin towers fall into their own foot prints and you said, “that was explosives that did that….controlled demolition, just like when they purposely take down a building into its’ own foot print“…and you were correct then as well until the “media” told you what to believe or else. And why did the invisible hand plan the attack on the twin towers? Was it about oil or other natural resources? Was it terrorists? No it wasn’t. It was about another war to sacrifice strong American males, some of the strongest of the human herd, which remain on the earth. The strong American male animal is literally all that stands between the NWO and their tyrannical vision of the future, so of course 9/11 was planned from within the UK, along with their controlled allies inside the US, Israeli and Saudi governments. The death of the strong males is THE CORNER STONE AGENDA of all agendas. http://bit.ly/2l2WIAe

The design of the control grid you and I live within, is to make sure we never think logically about what’s really going on. The system is there to guide us into the ditch of illusion and away from reality…….because if we knew what was really happening, we would certainly resist. The size of the con job is much bigger than you can imagine. It doesn’t matter if it’s the government endorsing soy in most processed foods or spraying BPA inside of every canned food on the planet, those chemicals are proven to decrease male birth rate PERIOD. Those chemicals, and hundreds more like them, are estrogen mimickers, proven to increase female birth rate and feminize any male, if the hormones aren’t strong enough to inhibit male birthing full stop. This is your corner stone of tyranny folks. The end of the natural male. The rise of the beta male. To sexually confuse what males make it out of the womb, if at all. Look at the men today in general. Look at their height. Look at their general strength. The promotion of the alternate male is in full gallop. The feminization of what males remain. The inversion of the natural protector. The elimination of all male resistance against the tyranny. The elimination of strength. The one gender species, within the one world government. The death of the strong male lion, so the hyenas can take over the pride land.  All done by tricking males to kill themselves in purposely orchestrated wars and by drowning the entire society in chemicals that eliminate the strongest males before they’re even born. It’s not a riddle, wrapped in an enigma. It’s in your home town right now and if you haven’t noticed, there are very few strong, brave and moral males left. Look at the men that now remain. Take a look. This is beyond obvious. Connect the dots because this agenda has been going on for much longer than you would ever believe. This agenda is near completion. For more information read my article “THE RISE OF THE BETA MALE…….THE DEATH OF THE ALPHA“…..right here. All the proof……..at this added link.  http://bit.ly/2iUaDV1

Plenty of the wars that you “learned” about inside government run schools. …. started by forces inside our own governments, all with the intention of getting the strongest males to the front line. (video below) A elaborate system that kills our strongest protectors, combined with a chemical feminization of the males who don’t make it into the fake and fabricated conflicts. Do you know what’s going on? Are you sure?