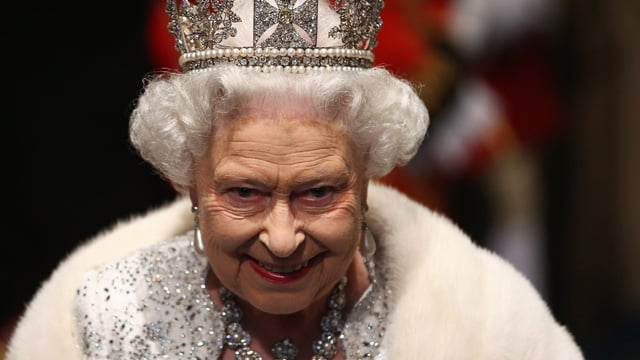 It has been established by incontrovertible evidence in the matter of Paul Anthony Hill [Mu-ad Dibh] v. Elizabeth II “Regina”, that the Queen violated her Coronation Oath three days after she accepted it, and that she and her Government have functioned in constructive fraud since June 6, 1953.

There is additional evidence that both the Queen’s Father and Grandfather did the same.

The people of the British Isles are owed a Christian Monarch occupying the throne of The United Kingdom. The entire Coronation process is designed to guarantee the acceptance of that role and responsibility—- and to assure the people of their Queen’s accountability to Christian law and principles.

One must also remember that the Queen is the titular head of the Church of England, an additional Office that she is obligated to serve in Good Faith and Honor.

Instead, three days after her Coronation, Elizabeth II abdicated the Christian throne and occupied the pagan “Chair of the Estates” instead.

The immediate impact of this is the unlawful conversion from Public Law to private corporate law being practiced throughout the realm in otherwise Public Courts, the use of “legal” rather than “lawful” presumptions in these courts, unlawful conversion of private property into public property, enslavement and press-ganging of living men by a process of personage and impersonation, and all the other evils we have witnessed.

This additionally means that the entire British Government has been functioning as a criminal organization since the 1870’s, and this has implications for the entire world — not just the British Territorial United States.

When we started our investigations we naturally thought that this whole problem was endemic to the United States, but soon found that it had proliferated worldwide and had its factual modern genesis during the reign of Queen Victoria.

Exactly how and by whom this continued to be “pulled off” despite all the protections and provisions against it was not immediately apparent, but the Queen’s abdication of the lawful and Christian throne provides the answer.

She willfully converted the mechanisms of her Government and the Judicial System to the service of the pagan “god” Baal, and adopted the Talmud as the form of “law” to be used. Like her own abdication, these “unstated” provisions were implemented with no Notice given to anyone in a position to object.

This Gross Breach of Trust and the profound violation of The Rule of Law which is involved must be addressed by Parliament and by the United Nations and by the Geneva and Hague Conventions. Mr. Trump, please take note.

England has had no Queen since 1953 and all actions undertaken since then are in doubt, as are the actions and authorities of her predecessors back to the 1860’s.

Elizabeth II’s secret abdication is the single most virulent source of the criminality which has infested government services corporations worldwide, created the Matrix of Corporate Feudalism, and reduced governance to the level of modern day Robber Barons.

We have the right, the responsibility, and the power to require an end to this circumstance—-bankers, kings, and queens be damned.

By Operation of Law, The Throne of The United Kingdom stands vacant. The Queen is “civilly” dead, murdered by her own hand 65 years ago. The Parliament was adequately informed of this circumstance and has done nothing. It is time for international intervention or there shall be no Rule of Law and no safety for anyone anywhere on this planet.