It is going to be an especially haunting Halloween for the Khazarian mafia banking elite, because they have been given an October 31 deadline to return the gold they stole or face being systematically hunted down and exterminated, say Asian secret society, CIA, and White Dragon Society sources.  After that deadline, bounties of gold will be placed on senior bankers starting with the heads of the EU Central Bank, the Bank of Japan, the Federal Reserve Board, and the BIS, the sources say.

The White Dragon Society (WDS) has offered the Khazarian mafia a way out of this situation.  All they have to do is monetize, in a constructive and reality-based manner, $40 trillion worth of 1934 Henry Morgenthau Bonds to finance the establishment of a meritocratic future planning agency.  This would be enough to end poverty, stop environmental destruction, and finance human expansion into the universe.  The alternative is death for all the Khazarian gangsters involved in central bank fraud and Babylonian debt slavery.

In the U.S., meanwhile, Pentagon sources say U.S. President Donald “Trump had a briefing and dinner with top military brass at the White House on October 23 in a blunt message to Israel, the Democrats, the deep state, and its invading army from Mexico not to steal the midterm elections.”  The photo below shows clearly where the U.S. military stands.

There is also a major push going on to take down the rogue regime of Saudi Israelia, multiple sources agree.  The murder of journalist Jamal Khashoggi is, despite attempts by the Khazarians to distract us with false flags etc., turning out to have been a fatal mistake.

The heads of state of Russia, Germany, and France were in Istanbul last week to meet with Turkish President Recep Erdogan to discuss this murder and the future of the rogue Zionist Saudi Israelia regime, according Russian sources.

CIA sources tried to convince this writer that the murder never actually took place by sending the following statement about the summit, to which the U.S., Israel, and China were not invited:

“They are there to discuss the Khashoggi matter.  They are trying to figure out how to release the truth about Khashoggi.  He is NOT dead.  He is also not available for anyone to meet.  The heads of the special powers that be, U.S., Russia, China, Turkey, France, Germany, Saudi Arabia, and Israel, know exactly where he is.  Let’s just say Khashoggi fucked them all.  He turned their own unacknowledged special-application-program weapon against them.  He had the access codes.”

The Russians responded by sending the horrific photographs below of Khashoggi’s dismembered body with his face peeled off. 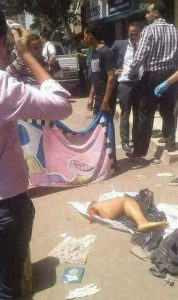 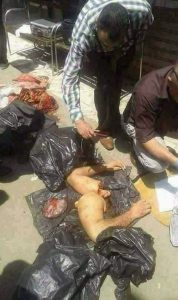 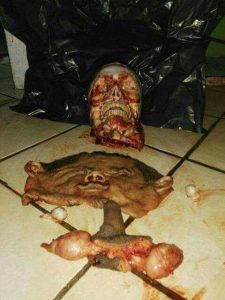 It seems the satan-worshiping Khazarians have a thing about peeling faces of people while they are still alive.  It is apparently intended to harvest the maximum amount of pain from the victim as a sacrifice to Ba’al, Jewish WDS sources say.

However, the CIA source, when confronted with the photographs, insisted his information was correct and said the photos could be faked.  He said DNA testing and comparison of dental records were needed.

In any case, Pentagon sources say this horrific act has led to a snowballing “global Saudi boycott that may include not just EU captains of industry Airbus, Siemens, ABB, and EDF, but Asian giants Samsung, Hyundai, Sumitomo, and it may progress into an EU arms embargo where even [Canadian Prime Minister Justin] Trudeau is under pressure to cancel a $15B arms deal approved by [his predecessor Stephen] Harper.”

Also, “with the EU parliament voting 325-1 for an EU arms embargo and [German Chancellor Angela] Merkel leading, Trump may be forced to use the EU arms embargo on Saudi Arabia to push for a UN arms embargo,” the sources say.

Khashoggi was murdered because he was about to expose Saudi Israelia’s use of chemical weapons in Yemen, according to the Express newspaper in England.
https://www.express.co.uk/news/world/1037378/Khashoggi-murder-news-saudi-arabia-chemical-weapons-use

There is now a big push by the Khazarians to get Khashoggi out of the news cycle, the Pentagon sources say.  They add that the alleged murder of 11 Jews at a synagogue in Pittsburgh last week was “a false-flag failed Hail Mary to get Trump to ignore Jewish vote fraud or migrant caravan, back gun control, and give Jewish community centers taxpayers’ money for security and establish Jewish victimhood ahead of 9/11 truth and a Gaza invasion.”

However, my college friend Christopher North happens to live a few blocks from the shooting, and he believes it really happened and knows the families of some of the victims.  He called the local blood bank and was able to confirm there was a huge call for blood from local hospitals after the shooting.  His daughter Sophia filmed the aftermath and posted it at the link below.
https://www.youtube.com/watch?v=wJk0viHcEGw

Nonetheless, former CIA agent Robert David Steele notes that, “As we now know from a review of all past false flags, the Zionists are more than happy to kill their own (Argentina, Jewish community center) as well as Americans (USS Cole, USS Liberty, 9/11).  Their objective:  to legalize the censorship at #GoogleGestapo where anyone who questions anything is considered ‘anti-Semitic.’”
https://phibetaiota.net/2018/10/robert-steele-active-shooter-at-synagogue-bullshit-programmed-drill-fema-show-me-the-bodies/

Hopefully soon the Jewish people will be freed from 3,000 plus years of Babylonian captivity and will no longer have to be murdered by their secret masters for propaganda reasons.

Meanwhile, a member of an Asian secret society had the following advice for Westerners fighting to free themselves from the Khazarians.  “They always present you with a duality— either fascism or communism—and there is no other choice.  Either we let the Chinese communists take over or we are going to be slaves of fascist Europe,” he says.  “It is 2018, two hundred years since the Waterloo stunt, and I certainly hope the light side has learned something useful by now,” he added.

The source said, “As soon as the U.S. starts arresting the likes of Hillary Clinton and Barack Obama as a show of good faith on the part of the U.S.,” the Asians will send tons of gold under U.S. Navy escort “to be piled up on the front lawn of the White House for the world to see.”  Trump can issue new currency from the gold, he promises.

He was advised to take a look at Guantanamo Bay in Cuba to see for himself that facilities had been built for huge numbers of prisoners.  We are now hearing that the arrests will begin after the November 6th midterm elections.

This is likely to be coordinated with a Russian move to shut down Khazarian regime in the Ukraine, but all we can say is that there is definitely operational silence in both the U.S. and Russia, indicating that some big, coordinated operation is taking place.

However, the CIA source mentioned above said that many of the criminals that people want arrested are already dead and all that they will be able to arrest will be “computer graphics or clones.”

Maybe, but one criminal who can be arrested is satan-worshiping Israeli Prime Minister Benjamin Netanyahu.  Netanyahu went last week to Oman hoping the Sultan would provide him with protection from imminent arrest, Mossad sources say.  Rothschild and P2 Freemason Agnelli family sources say they are hoping to, as the Japanese expression goes, “cut off the lizard’s tail to escape” by sacrificing Netanyahu and the fake Mohammed bin Salman in order to protect themselves.

This means special forces will have to raid the California tech companies like Google, Facebook, Paypal, and the big pharmacidical companies as well as the central banks if we are to end this.

It would also help if we can end the imprisonment on false charges of fellow freedom fighters such as Winston Shrout.  For details, see this YouTube link:
https://youtu.be/WAO7xkl3On4

Another thing to keep in mind is that, according to CIA sources, many of the elite are faking their own deaths in the hopes of evading justice or revenge.  The source says the reported death of Thai billionaire Vichai Srivaddhanaprabha in a helicopter crash is an example.
https://www.bloomberg.com/news/articles/2018-10-27/helicopter-crashes-outside-king-power-stadium-in-leicester-sky

“Vichai was NOT on the helicopter.  Read the article carefully.  A person close to the family reported the information to the BBC.  He has now become another one of the elite to disappear from the scene.  He is not liked by many of Thailand’s old money clan in Bangkok.  A good way to go off-radar for good.”