Prepare For Change
Home ARCONTES Cuba Scores 27th Victory at the UN on “Ending the US Blockade”.... 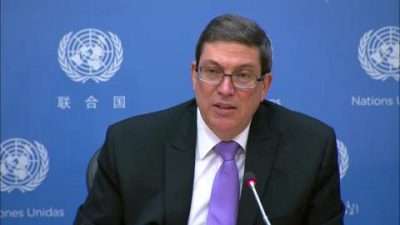 A new round of vote at the United Nations on Cuba’s resolution “Necessity of ending the economic, commercial and financial blockade imposed by the United States against Cuba” has just ended. [1] This was the 27th year in a row that Cuba submits this resolution and for the 27th time the resolution is voted overwhelmingly in favour: 189 voted in support, 2 against (United States and Israel), zero abstentions. [2]

In an attempt to sway the vote against the resolution, this year the US surprisingly introduced eight aggressive amendments forcing the UN General Assembly to debate them. This was a manipulative tactic to compel a discussion on the issue of human rights and the Sustainable Development Goals in Cuba.

US delegate at the UN, Nikki Haley tweeted the day before:

“Tomorrow, the UN will listen to what we have to say about it [Cuba’s resolution] and the countries will have to vote between Cuba and the United States. Who will vote with us?”

Despite the fact that Cuban foreign Minister, Bruno Rodriguez, noted that there are other bodies of the UN where it would be more appropriate to seriously debate such issues, the amendments were allowed but, following Cuba’s prompt proposal, the Assembly voted that two thirds of the votes would be required to pass the amendments. All eight amendments were defeated. Only the US, Israel and Ukraine voted in favor.

That sealed the US isolation on what the Iranian delegate called the “pathological tendency of the United States” in relation to Cuba. Nikki Haley admitted that the US is alone in its policy towards Cuba, and then stated, “We have no problems in being alone.” And so they are.

We must read in this UN vote not only Cuba’s steadfast determination to its legitimate right to sovereignty and self determination, but also the implicit rejection by virtually all nations to sanctions and financial blockades by the US for violating the basic principle of non intervention established in the UN Charter.

Nevertheless, the US delegate made the US doctrine of exceptionalism in international relations evident when she admitted,

The US Blockade Is the Main Obstacle to Cuba’s Development

“The United Nations does not have the power to end the embargo [blockade] against Cuba.”

That is unfortunately true but it reveals the bully behavior of her government.

On the other hand, prior to the vote, Bruno Rodriguez delivered a speech that brought home the economic implications of the blockade,

In relation to human rights, he pointed at the US saying,

“The United States is the author of human rights violations against its own citizens, especially African-Americans and Hispanics, minorities, refugees and migrants.”

He went on to say,

“The US Government does not have the least moral authority to criticize Cuba or anyone else in terms of human rights. We reject the repeated manipulation of these for political purposes and the double standards that characterize it.”

And addressing the US added,

“The United States is only part of 30% of Human Rights instruments. No one can be surprised that you have left the Human Rights Council.”

In reference to the blockade specifically, Bruno Rodriguez stated,

“The blockade constitutes a flagrant, massive and systematic violation of the human rights of Cubans, and has been and is an essential impediment to the welfare and prosperity aspirations of several generations.” “The blockade is against the Charter of the United Nations and its extraterritorial application harms all States.” His address was inspiring and strong.

“Cubans will continue to freely decide their internal affairs in close unity, as at present in the popular debate of the draft of the new Constitution and, later in the referendum to adopt it.”

“There is no room for interference from a foreign power.”

At the news of the outcome of the UN vote on the US blockade against Cuba the president of Cuba, Miguel Diaz-Canel (image on the right), succinctly stated,

“The world is with Cuba.”

Nino Pagliccia is an activist and writer based in Vancouver, Canada. He is a Venezuelan-Canadian who writes about international relations with a focus on the Americas. He is editor of the book “Cuba Solidarity in Canada – Five Decades of People-to-People Foreign Relations” http://www.cubasolidarityincanada.ca. He is a frequent contributor to Global Research.

Featured image is from The UN Web TV.