Just when Deutsche Bank probably thought the worst of its legal troubles (over the Libor scandal, sales of shoddy mortgage-backed securities, FX and precious metal rigging which collective resulted in tens of billions in legal fines) were behind it, the struggling German lender is being drawn deeper into the biggest money laundering scandal in European history.

Following reports over the weekend that Deutsche, JPM and Bank of America had been approached by federal investigators about their correspondent banking business’s involvement in clearing transactions for Danske Bank’s Estonian branch, the whistleblower who helped blow the lid off Danske’s $234 billion money laundering scandal said during testimony to the Danish Parliament that $150 billion of the money had been cleared by a large European lender, stopping short of naming Deutsche, likely to respect confidentiality rules governing the whistleblower’s work at Danske. Incidentally, as Bloomberg adds citing a “person familiar”, the unnamed bank is Deutsche Bank.

In an internal audit released earlier this year, Danske admitted that most of the $234 billion in non-resident cash came from suspicious sources in Russia, Azerbaijan and Moldova. With the help of its dollar-clearing correspondent banks, Danske converted the rubles and other foreign currency into dollars and moved it into the Western financial system. Roughly $8 billion of the money was converted via legal-though-shady “Mirror Trades”, where a client buys and sells a security in two different currencies, typically to help launder their money into dollars and euros (in a strange but sadly unsurprising coincidence, Deutsche’s Moscow desk got caught up in a mirror trading scandal of its own a couple years back).

Howard Wilkinson, the former Danske employee-turned-whistleblower, claimed that some of the money flowed through a London-based trading firm called Lantana Trade, which is rumored to have ties to the family of Russian President Vladimir Putin and members of the FSB. Wilkinson is expected to testify before both the Danish and EU parliaments this week, and will also be speaking with US investigators, according to the Financial Times. In addition to the DOJ and SEC, FinCEN has said it is actively interested in the Danske case.

Wilkinson, who first warned Danske’s directors in Copenhagen about suspicious activity in Estonia back in 2013 and 2014, also alluded to a “large US bank,” which the Financial Times identified as JPM.

Mr. Wilkinson also hit out at “large US bank 1” — known to be JPMorgan Chase — which stopped its correspondent banking relationship with Danske in 2013 over concerns about the non-resident portfolio in Estonia at the heart of the scandal which ran from 2007 until 2015. “It takes them seven years,” he said, of how long it took them to end their relationship with Danske.

In the past, correspondent banks involved in money laundering scandals similar to Danske’s have been treated as unwitting dupes by prosecutors. But the aggressive steps being taken by US prosecutors (regulators in Denmark, London, Estonia and the EU are also looking into the scandal) suggest that this could be the beginning of a crackdown that could fundamentally change how large international banks manage AML controls on their correspondent banking business.

That, in turn, could create serious problems for Baltic banks, which might find themselves effectively cut off from the broader global financial system, even if they take the necessary steps to tighten their AML controls. According to meeting minutes first reported by the FT, Danske directors acknowledged the suspicious activity in Estonia, but by April 2014, Wilkinson said it had become clear that the bank wasn’t planning to act. Indeed, former Danske CEO Thomas Borgen, who had previously run the bank’s international business, had reportedly taken steps to protect the Estonian branch, which Danske took over during its acquisition of Finnish Sampo Bank.

We’ll give you one guess as to why: 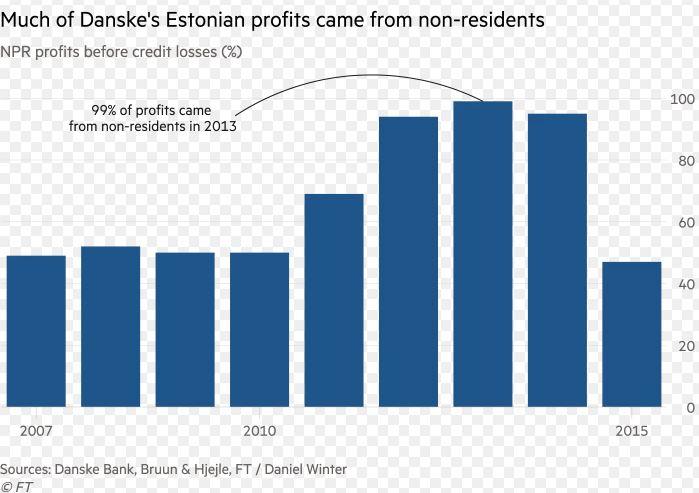