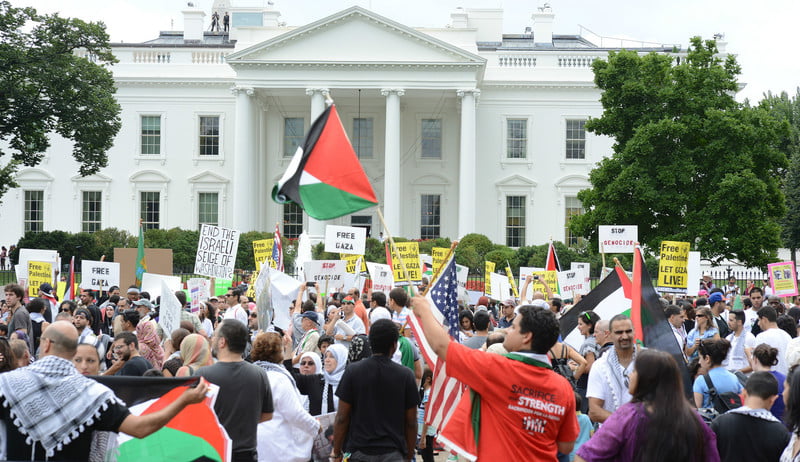 Anti-BDS bills are designed to suppress Palestine rights activism in the US. (Stephen Melkisethian/Flickr)

Two separate lawsuits were filed this week against a Texas law requiring state contractors to certify they will not boycott Israel.

Another lawsuit was filed by a local newspaper in Arkansas, which refused to sign a similar pledge in order to win an advertising contract.

On Monday, the Council on American-Islamic Relations filed a federal lawsuit on behalf of Bahia Amawi, a speech pathologist in Texas, who refused to sign a contract to renew her job with the Austin public school district.

The contract included a clause that she “does not” and “will not” engage in a boycott of Israel or “otherwise tak[e] any action that is intended to inflict economic harm” on that country.

“The language of the affirmation Amawi was told she must sign reads like Orwellian – or McCarthyite – self-parody, the classic political loyalty oath that every American should instinctively shudder upon reading,” Glenn Greenwald wrote in The Intercept.

This prompted criticism that Abbott is prioritizing allegiance to a foreign country over his responsibility to protect his constituents’ rights:

By requiring all contractors to certify that they’re not engaged in a boycott of Israel, Texas’ law unconstitutionally disqualifies people from working for the state based on protected expression that has nothing to do with their jobs. https://t.co/iVm0Fwujcr

On Tuesday, lawyers with the American Civil Liberties Union filed another lawsuit on behalf of four Texans who “were forced under the law to choose between signing the certification or forgoing professional opportunities and losing income,” according to the ACLU.

KETR, an NPR affiliate, is licensed with Texas A&M University at Commerce, a public university.

In order to continue his job at KETR, the investigative reporter George Hale signed the contract earlier this year but felt uneasy about the anti-boycott clause.

Hale, who worked for years at Ma’an News Agency in Bethlehem, in the occupied West Bank, “made it clear to his general manager that he did not approve of the certification provision and questioned why it was included,” the lawsuit states.

I'm proud to be one of the plaintiffs challenging a coercive Texas state law that requires government contractors to certify that they are not engaged in boycotts of Israel or territories controlled by Israel.https://t.co/yBX6PJCTqS #RightToBoycott pic.twitter.com/KvpFpGKCu9

Hale told The Electronic Intifada that he began researching the 2017 Texas law. He realized it could affect employees at hundreds of radio stations across the US.

“Two-thirds of NPR stations are affiliated with public universities and mine is one of them,” he said.

“And we’ve heard nothing from NPR at all on this,” he added. “Why haven’t I heard from them loudly protesting these laws when they passed? There’s no telling how many people have a clause like this in their contracts, and are afraid to speak up.”

To date, 26 US states have passed anti-boycott measures.

Though the station is licensed by the university, it does not perform state duties.

“Splitting hairs aside, [the anti-BDS law] is still wrong,” he added.

“Why isn’t NPR also condemning this infringement on free expression of their own colleagues?” Sarah Leah Whitson tweeted.

Here’s a journalist with @NPR member station @KETR, which is licensed to #Texas A&M University-Commerce. His new contract requires him to sign an #Israel loyalty pledge. Why isn’t @npr also condemning this infringement on free expression of their own colleagues? https://t.co/00NK0950Gl

When his contract was up for renewal in September, Hale asked for the anti-BDS clause to be removed, the lawsuit says.

The issue was referred up to the Texas A&M general counsel, but the university insisted the provision was a legal requirement.

“Hale attempted to sign the contract under protest and indicated so in a notation” on the agreement, the lawsuit adds.

But the university rejected the contract. “Faced with the bleak prospect of losing his job, Mr. Hale had no choice but to sign the contract in order to complete his commitments and earn a living,” the lawsuit states.

“This misguided law seeks to undermine a form of protected expression that has been a part of our nation’s constitutional tradition since the founding,” Hauss added.

A newspaper in Little Rock filed a federal lawsuit last week challenging a 2017 Arkansas state law that requires contractors to pledge not to boycott Israel.

The law “also requires Arkansas to create a blacklist of companies that boycott Israel, and require public entities to divest from blacklisted companies,” according to civil rights group Palestine Legal.

The lawsuit was filed after the University of Arkansas-Pulaski Technical College “informed the Times that it had to sign a certification that it would not engage in a boycott of Israel if it wanted to continue to receive advertising contracts” from the the university, the newspaper added.

The publisher, Alan Leveritt, declined, and the paper lost the university’s advertising contract.

“Campuses in the University of Arkansas system have been advertising with us for years, so we were shocked and more than a little troubled when they sent over what looked like a loyalty oath as a condition of payment,” Leveritt said.

On Wednesday, US senators Bernie Sanders and Dianne Feinstein called on Senate leaders to block the inclusion of the Israel Anti-Boycott Act into a spending bill that Congress is set to pass this week.

The Israel Anti-Boycott Act and the Anti-Semitism Awareness Act are two federal bills that have stalled in Congress amid growing concerns that they criminalize speech critical of Israel.

They have been tacked on to the spending bill as part of a last-minute, stealth effort to get them passed.

Sanders and Feinstein made clear that they do not support the boycott movement for Palestinian rights, but “remain resolved to our constitutional oath to defend the right of every American to express their views peacefully without fear of or actual punishment by the government.”

The Israel Anti-Boycott Act, introduced by Democratic Senator Ben Cardin, would impose prison sentences and heavy fines on organizations or their personnel that participate in a boycott of Israel or its settlements in the occupied West Bank and the Syrian Golan Heights.

The powerful Israel lobby group AIPAC has made the bill one of its top legislative priorities.

“At a time when the Netanyahu government is pursuing policies clearly aimed at foreclosing the two-state solution, it is deeply disappointing that Congress would consider choosing to penalize criticism of those policies,” Sanders and Feinstein said.

In a rare show of agreement with Palestinian rights advocates, The New York Times and The Washington Postpublished articles this week slamming the Israel Anti-Boycott Act.

“It would be more constructive if political leaders would focus on the injustice and finding viable solutions to the Israeli-Palestinian conflict rather than reinforcing divisions between the two parties and promoting legislation that raises free speech concerns,” the Times editorial board said, noting that anti-boycott legislation passed by Congress would likely be challenged in court.

“What we have right now is a situation in which the Israeli right and the American right are joined in an effort to convince the world that any criticism of the Likud government’s policies is not just wrong but anti-Semitic and thus must be quashed,” Washington Post columnist Paul Waldman wrote.

“It’s a poisonous idea, and Democrats such as [senators] Cardin and [Cory] Booker, not to mention the other Democrats who have supported this bill, shouldn’t help them spread it.”