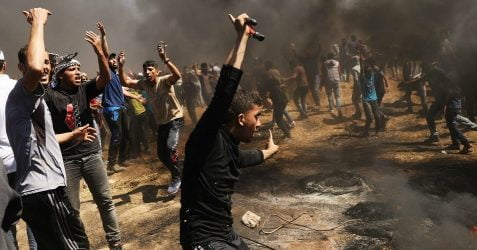 A systematic pattern of war crimes amounts to crimes against humanity, which Israel is certainly guilty of this year, even if the international institutions are too cowardly to indict the Netanyahus and the Liebermans

2018 was in many ways a turning point for the position of Israel in the system of Western, liberal, capitalist democracies. It had long sat uneasily among France, Britain, and the United States, inasmuch as it was founded on a formal racial supremacist principle that Jews must rule the state. Racism is important in the other democracies, as well, but it is not typically enshrined in the constitution. The French Rights of Man mentioned nothing about race.

After 1967, Israel acquired substantial colonial possessions in the form of the Palestinian West Bank and Gaza, in which its leaders began implementing a classic settler colonial regime reminiscent of Apartheid South Africa. The Israeli leadership egregiously violated international law by flooding their own citizens into a militarily occupied territory, and by extensively altering the lifeways of the occupied population. I would argue that the occupation has now lasted so long and witnessed so many severe violations of the Geneva Convention of 1949 that the occupation itself is now illegal. Palestinians living under the Israeli jackboot do not have secure rights of property or control over their natural resources and, being kept stateless, lack even the right to have rights.

Somewhat astonishingly, the assemblage of far-right Israeli parties that rules Israel has managed to worsen its wretched human rights record in 2018 and to depart from liberal capitalist democracy almost entirely.

Somewhat astonishingly, the assemblage of far-right Israeli parties that rules Israel has managed to worsen its wretched human rights record in 2018 and to depart from liberal capitalist democracy almost entirely. Not only is Israel not the only democracy in the Middle East (that distinction now belongs to Tunisia), it isn’t a democracy at all in the sense of a state of equal citizens able to vote for the government that rules them.

Informed Comment reported that on July 19, the Likud-led government passed a new Nationality Law formally vesting “sovereignty” solely in the hands of the 75-80% of the population of Israel that is Jewish. (About 21% of Israelis are of Arab Palestinian heritage and another 300,000 or so persons are not recognized as Jews by the Grand Rabbi and so would not participate in sovereignty; these are mostly immigrants whose mothers were not Jewish).

I wrote at the time, “It would be as though the US passed a law designating America as a state for white Christians, excluding African-Americans and Latinos, and making English the only official language.” I also pointed out that Apartheid is considered a crime against humanity in the Rome Statute signed by most countries in the world, which governs the judgments of the International Criminal Court.

Having formally turned non-Jews into second-class citizens inside Israel, the Likud government accelerated its colonization program in the Occupied Palestinian West Bank. The pace of building squatter settlements on stolen Palestinian land has doubledunder the Trump administration in 2018.

You may say it can’t get any worse. It got worse.

The Palestinians living in the Gaza Strip have been cut off from their traditional markets and are being boycotted by the Israeli state, which denies them an airport or seaport. (The Likud is only against boycotts that it isn’t leading). Many key materials are not allowed into Gaza by the Israelis, and although food isn’t interdicted, in fact medical treatment is being denied to most of those patients who can’t be treated at Gaza’s own rundown and relatively primitive medical facilities.

Some 70% of the people in Gaza are refugees violently displaced there by militant Zionist militias from their homes in what is now Israel. Most of them are still living close enough to their old homes that they could walk to them if they were allowed to. Again, Israel is in violation of international law in having expelled people from Israel and made them refugees, and then refused to allow them ever to return. Now it has placed them under blockade in their place of exile on the grounds that they haven’t meekly accepted the loss of their property and lives at the hands of Poles, Russians, Ukrainians, French and Germans.

The horrible conditions of civilian siege under which people in Gaza labor (and half the residents of the strip are children) has become intolerable, and this year they began conducting marches demanding the right to return.

These marches could have been a public relations disaster for Israel if the Western press actually did its job when it comes to Israel and Palestine (it does not, viewing the situation through a racialized and colonial lens rather as it used to view South Africa in the 1970s and 1980s).

I do not believe any of the US news networks so much as mentioned the weekly protests in Gaza after the initial two or three.

Prime Minister Binyamin Netanyahu and his officer corps decided to deal with these marches by shooting the demonstrators down in cold blood on the Gaza side of the border. The American press, which despises the Palestinians with a passion for the crime of having been victimized by an American ally, invented entirely imaginary headlines claiming that the Palestinians had been killed or injured in “clashes.” But there were no clashes. They with perhaps one exception never reached the Israeli border or actually encountered Israeli soldiers. They were shot down well inside Gaza even though they posed no danger to any Israeli military personnel.

It is a measure of how ineffective and pusillanimous the mechanisms of international law and order are that no Israelis have been indicted for these murders.

They were sniped at by professional snipers. They were murdered. It is a measure of how ineffective and pusillanimous the mechanisms of international law and order are that no Israelis have been indicted for these murders.

It did not pass a resolution about Netanyahu and his generals murdering unarmed, peaceful Palestinian demonstrators (not to mention journalists, medical personnel, and random children.

One Israeli soldier has been killed and one injured.

The rallies are still being held every Friday and almost no one reports on them despite the creepy casualty tolls. The Israeli snipers appear to have deliberately aimed to cripple the Palestinians they shot in the lower limbs.

The Israeli police have recommended that Netanyahu be indicted for blackmailing and bribing the Israeli press to cover him positively. That is another way in which it is no longer possible to speak of Israeli democracy. American casino mogul Sheldon Adelson started a free newspaper to praise Netanyahu, which was hurting the business of the real newspapers, and Netanyahu offered them lower Adelson print runs if they would make nice with him in their stories on the prime minister. Press freedom under Netanyahu in Israel has been significantly eroded.

So to avoid being indicted, Netanyahu has announced early elections for April. He put the attorney general in a difficult position. If he indicts Netanyahu now, he could be accused of forestalling a decision that should belong to the voters. If Netanyahu wins the election, he will argue he should not be indicted because the people have spoken.

Israeli rules over about 5 million stateless Palestinians in the Occupied Territories. They will not have the right to vote in this election, even though the next Prime Minister of Israel will decide their long term fate.

So there you have it. Israel at the end of 2018 is now unambiguously an Apartheid state, admired only in the US Deep South among those who are nostalgic for their own Jim Crow Apartheid. Its leaders deprived nearly a quarter of Israeli citizens of any share in national sovereignty. They sped up the colonization program in the Palestinian West Bank and coddled armed, violent squatters (who are often secretly subsidized by the Israeli state).

But worse of all, the Israeli elite decided just to shoot down unarmed protesters in the thousands, a clear war crime.

A systematic pattern of war crimes amounts to crimes against humanity, which Israel is certainly guilty of this year, even if the international institutions are too cowardly to indict the Netanyahus and the Liebermans, and even if the even more cowardly (or just frankly neocolonial) American press has been largely afraid to say these things out loud. (There are significant exceptions here, and the print press has been better than TV for the most part).

2018 was the year Israel finally went completely rogue and ensured that it can no longer be considered to be in the club of liberal capitalist democracies. It is now formally an Apartheid state even inside the Green Line. It is also the year when the Israeli elite consciously decided to shoot down with live ammunition unarmed, peaceful demonstrators in the thousands. These authoritarian policing methods most resemble those of fascist states of the interwar period.

Juan Cole teaches Middle Eastern and South Asian history at the University of Michigan. His new book, The New Arabs: How the Millennial Generation Is Changing the Middle East (Simon and Schuster), will officially be published July 1st. He is also the author of Engaging the Muslim World and Napoleon’s Egypt: Invading the Middle East (both Palgrave Macmillan). He has appeared widely on television, radio and on op-ed pages as a commentator on Middle East affairs, and has a regular column at Salon.com. He has written, edited, or translated 14 books and has authored 60 journal articles. His weblog on the contemporary Middle East is Informed Comment.