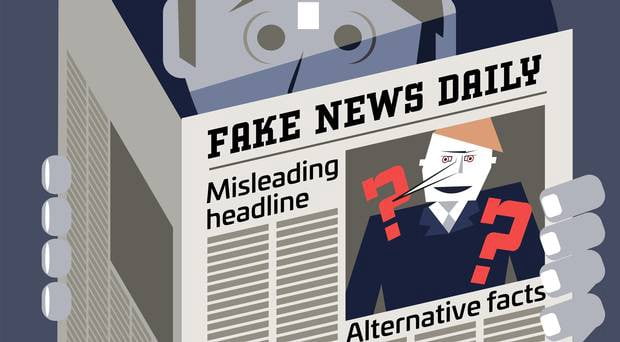 Mainstream news is fake news, through and through. Nearly every story is twisted or straight up made up and fabricated out of thin air, all to support diabolical narratives that keep their clones highly emotional, frustrated, and distracted from anything and everything that really matters in this world.

Even when the major networks, newspapers and websites get caught red-handed fabricating stories, embellishing, and horribly exaggerating, they never admit it, apologize, or outright walk-it-back. All they do is publish some tiny blurb in some obscure spot about a “misprint,” or they simply just claim their source may have misinterpreted something somehow somewhere (imagine that). The total tell-tale sign of fake news rears its ugly head anytime they claim that the source or sources are “anonymous.”

Luckily, for us, the folks who seek the truth daily, know the truth, and live the truth, are watching the mass media collapse in an epic, avalanche-style fail, as the best propaganda they can purport falls apart at the seams, and the soothsayers of the biggest lies are getting drained from the swamp, one by one. MSM has become one huge conspiracy theory, and the fifty million voters who voted for more torture in 2016, but lost, are still doped up and dumbed down (like Nancy Pelosi and Maxine Waters) on GMOs, flu shots, prescription medications, tap water, and multi-vitamins they bought at Walmart.

Time Magazine, the vaccine-pushing, global-warming-loving propagandists, photo-shopped a picture of President Trump indifferently staring down at a seven-year-old Honduran migrant girl, who supposedly got separated from her parents due to Trump’s border policy. Turns out the kid was NEVER separated from her parents, the family was NOT fleeing violence, and the mother was previously deported from the U.S.

Plus, the moronic mother left her three other children in Honduras and, like an ever more complete idiot (if that’s even possible), paid a “coyote” child smuggler to help her cross the U.S. border illegally. The father of the girl uncovered the big lie himself, but mainstream media (MSM) kept that part out of the news, as usual. Fifty million media-drunk Americans are still raging with anger over the fake news narrative.

#9. MSM claims no illegal aliens are ever infected with diseases

NBC, the fake news network, claimed illegal aliens are great for the health of all Americans. Yes, they did. The pro-vaccine cult of America has joined with mainstream media in their massive declaration that all illegal immigrants are 100 percent healthy at all times, completely immune to all diseases, and can never spread anything contagious to Americans once they flood into America to get their free health coverage. Meanwhile, these same mercury-drugged zombies swear that every disease outbreak in America is caused by unvaccinated American kids.

Meanwhile, illegal immigrants are sure enough carrying deadly diseases with them, including strains of tuberculosis (strain XDR-TB that has no remedy), malaria, Hepatitis, pathogens, parasites, lice, HIV and AIDS.

#8. National Geographic sounds the alarms that “everywhere on Earth” ice is melting and soon the oceans will swallow us all whole

The ultimate Ponzi scheme is in full effect and getting shoved down our throats by MSM, National Geographic, and even NASA, with their fake charts, skewed statistics, and fabricated graphs. This year, the entire “global warming” hoax imploded and was revealed by independent media, including Natural News, so they’ve had to change the theme to “climate change,” so now they can point to any and all extreme weather and say “See! Told you so!”

Ooh, what a whopper for MSM. A little boy, who was vomiting relentlessly because he had influenza B (and likely other viruses), was taken from care near the U.S. border by his father who claimed he was fine and felt much better. Doctors had given the boy antibiotics and medications to reduce his fever, but mainstream fake news media blamed the President for killing the little Guatemalan boy, because any illegal alien that dies from diseases they brought with them from their third world country is always Trump’s fault. Nice one.

#6. Democrat Elizabeth Warren gets DNA test to prove she’s an American Indian, only to find out she’s lied for years and illegally defrauded institutions

Turns out Senator “Pocahontas” is about as much a Cherokee as Vladimir Putin and Kim Jong-un. After challenging President Trump on the matter and taking a DNA test, turns out there is no such test to prove you’re Native American, and the real Native Americans ousted Warren’s decades-old lie and made her look like a complete idiot, not to mention a criminal who used the lie to acquire cushy jobs at Ivy League colleges.

#5. CNN and MSNBC blame Republicans for the Steele Dossier that the Deep State illegally created and used to spy on Trump and propagate the entire Trump-Russia collusion hoax

The worst liars will always accuse the innocent of that which they themselves are guilty. The “Demoncrats” are so dumb that they literally accused the Republicans of funding the fake news story that Trump urinated with prostitutes in Russia on a bed Obama once slept on. You can’t make this stuff up, unless you’re a bumbling idiot and a desperate Democrat.

For desperate Democrats and their journo-terrorist stooges, it’s a “say anything” world of fake news and false accusations all meant to cover up their own corruption and election fraud. After a Democratic election official and supervisor, Brenda Snipes of Broward County, (allegedly) illegally hid ballots and tried to sneak them back into her office later, fake news NBC lied and claimed on air that Snipes was a Republican.

The treasonous FBI heads, who are now fired and disgraced, really were a cancer on our country, but Trump was only referring to Comey and his cronies, calling out those crooks and liars, not the FBI in general. Draining the swamp really is a huge chore, and the swamp creatures are scrambling and clawing themselves to pieces like crabs in a barrel.

The most obnoxious reporter in the history of the world works for CNN, not surprisingly, and knocked down the arm of a White House intern who was trying to appropriately pass the microphone after Acosta wouldn’t. Still, the ultimate Fake News Network had to twist the story to try to save face, but as usual, they got ousted.

In a massive Deep State coup to keep a Liberal majority on the Supreme Court, operatives dug up old female acquaintances of Brett Kavanaugh to lie, under oath, and claim they were sexually assaulted and even gang raped by him and his buddies 30 years ago in college. All the fake news got deconstructed on live television, all the false accusers got exposed, and justice was served (pun intended).