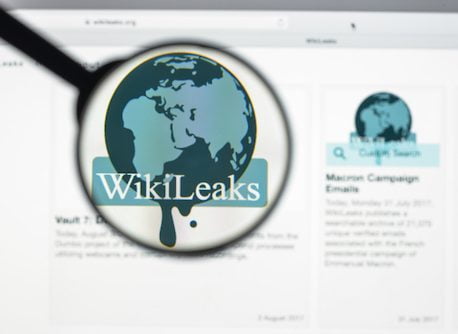 Ecuador & the UK have bowed to their US master and facilitated the Assange arrest. Get the background on why the WikiLeaks publisher has been grabbed.

In a disgraceful and disturbing blow to freedom of the press, Australian WikiLeaks founder and publisher Julian Assange has been ejected from the Ecuadorian Embassy in London. British police arrested him yesterday (Thursday April 11th, 2019) and took him into custody where he awaits UK charges of skipping bail. However, the Assange arrest is far bigger than skipping bail (although he could get up to 1 year in prison for it). Ecuador and the UK are acting at the behest of the US, who is manipulating and ordering its lackeys to facilitate the extradition of Assange to the US, where he will face more serious charges of conspiracy to hack into a US military/governmental database and obtain info without a proper security clearance and “need to know.”

To look at this Assange arrest from a broader perspective, here’s what you need to know. The United Nations formally ruled his detention to be arbitrary and a violation of human rights. They have repeatedly issued statements calling for him to walk free, including very recently. The truth is that the US has been pressuring Ecuador for a while to hand over Assange. Former Ecuadorian President Rafael Correa would never have done so, but the new corrupt Ecuadorian President Lenin Moreno cut a deal with the devil to get Ecuador at least $4.2 billion in loans (from the IMF) in exchange for renouncing Assange’s Ecuadorian citizenship and kicking him out of their UK Embassy. AsMintPressNews notes:

“Less than two weeks ago, on February 21, Ecuador signed a dealsecuring the controversial IMF loan for a total of $4.2 billion, in addition to another $6 billion from other U.S.-dominated financial institutions like the World Bank, for a total of $10.2 billion. If WikiLeaks’ early January warning is to be believed, it can be assumed that deal was secured by Ecuador offering the U.S. assurances that it would soon “hand over” Assange.”

Classified information is not the same thing as “private.” Classified information is classified by the executive branch of the USG (United State Government). The info is still “public.” Someone who gains access to classified public info and publishes it is not the same as a hacker who gains digital access to someone’s computer and personal passwords, files, emails, etc. The public has a right to know. The public has a right to know if the USG is murdering innocent Iraqi civilians and lying about it, as this famous 2010 video obtained by Chelsea (formerly Bradley) Manning and published Assange shows. Manning was the whistleblower, not Assange, and anyway, whistleblowing is supposed to be a protected act.

As his lawyer states, Assange has been arrested, in short, for telling the truth.

“In an upside-down world, fake news circulates freely and those who reveal the truth are persecuted and imprisoned.”

What is truly chilling about this effort by the USG to get Assange is that they are trying to claim a legal precedent which would criminalize journalists from trying to obtain classified information. The exact indictment is here. They are trying to make Assange more than just a publisher. The Watergate journalists who obtained and published classified information were hailed as heroes. The US Bill of Rights’ 1st amendment specifically names the press – journalists, reporters, publishers, etc. – as a protected class: “no law shall be made that abridges or restricts freedom of the press.” It is the nature of the profession of the press to actively pursue information to publish. The wording of this indictment may set a precedent that could make it illegal to:

– encourage sources to hack into systems or steal information that you as a journalist want to publish; and

What Assange is Really Guilty Of

WikiLeaks receive leaks and publish them. Numerous newspapers do this. The big difference is the pristine record of WikiLeaks. They have an incredible 100% reliability track record in stark comparison with the fake news MSM which has been caught lying over and over again. Are we about to witness a man getting punished by telling (and proving to) the whole word uncomfortable truths, such as that the US military kills innocent Iraqis and that the CIA conducts massive spying and assassinations around the world? This is a clear case of shooting the messenger.

Assange is Not American and Neither is WikiLeaks

Another important point here. Julian Assange is not American and Wikileaks is a foreign-based news organization. How can the US possible have legal jurisdiction over someone who is not in the USA, is not a US citizen or resident, and whose organization is not based in the US? Are we about to witness a precedent where the tyrannical USG can control its vassal states to the point where it can manipulate or order them to assist in the criminalization of publication and free speech?

Trump is a Super Hypocrite over Assange Arrest and WikiLeaks

Trump was all glad and happy with WikiLeaks when they were exposing Hillary Clinton, not because Trump cares about freedom of the press, but because it was politically convenient for him that dirt was being released on his presidential opponent. Some of the info even helped get him elected. Now he resides over an administration which is punishing and prosecuting truthtellers. The stench of hypocrisy is shocking. Even the DOJ of Obama, for all his faults, didn’t try prosecuting Assange.

Will WikiLeaks Now Release More Damaging Info as Hinted in the Past?

In the past, Assange has said that if he were to be arrested or killed, WikiLeaks has a “poison pill” of more information that they would release. At one point his then lawyer Mark Stephens stated that WikiLeaks was holding further secret material which he dubbed a “thermo-nuclear device.” Will Assange give the order for WikiLeaks to release it? Time will tell as the Assange arrest story unfolds.

Makia Freeman is the editor of alternative media / independent news site The Freedom Articles and senior researcher at ToolsForFreedom.com, writing on many aspects of truth and freedom, from exposing aspects of the worldwide conspiracy to suggesting solutions for how humanity can create a new system of peace and abundance. Makia is on Steemit and FB.