Prepare For Change
Home Awakening MEXICO WANTS TO DECRIMINALIZE ALL DRUGS AND NEGOTIATE WITH THE U.S. TO... 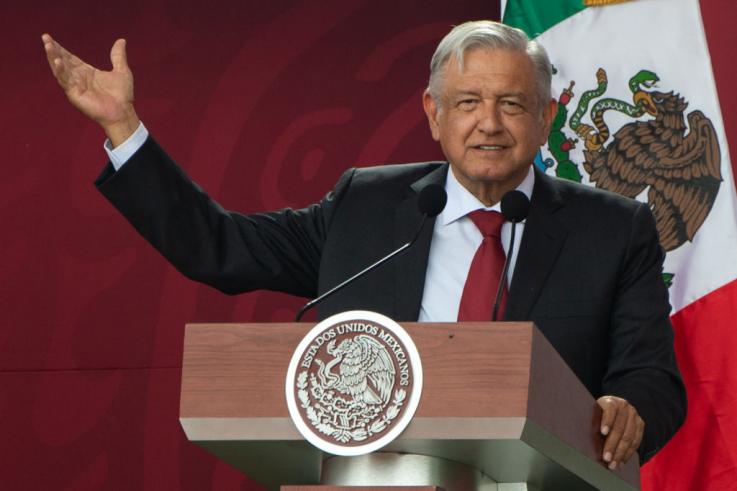 Mexico’s president released a new plan last week that called for radical reform to the nation’s drug laws and negotiating with the United States to take similar steps.

The plan put forward by the administration of President Andrés Manuel López Obrador, often referred to by his initials as AMLO, calls for decriminalizing illegal drugs and transferring funding for combating the illicit substances to pay for treatment programs instead. It points to the failure of the decades-long international war on drugs, and calls for negotiating with the international community, and specifically the U.S., to ensure the new strategy’s success.

“The ‘war on drugs’ has escalated the public health problem posed by currently banned substances to a public safety crisis,” the policy proposal, which came as part of AMLO’s National Development Plan for 2019-2024, read. Mexico’s current “prohibitionist strategy is unsustainable,” it argued.

Mexican President Andres Manuel Lopez Obrador delivers a speech at the Santa Lucia Air Force Base in Zumpango, near Mexico City, on April 29. The plan put forward by the president’s administration calls for decriminalizing illegal drugs and transferring funding for combating the illicit substances to pay for treatment programs instead.PEDRO PARDO/AFP/GETTY IMAGES

The document says that ending prohibition is “the only real possibility” to address the problem. “This should be pursued in a negotiated manner, both in the bilateral relationship with the United States and in the multilateral sphere, within the [United Nations] U.N.,” it explained.

Drug reform advocates have welcomed AMLO’s plan. Steve Hawkins, executive director of the Marijuana Policy Project, told Newsweek that the Mexican president’s plan “reflects a shift in thinking on drug policy that is taking place around the world, including here in the U.S.”

“The war on drugs has been extremely costly, not just in terms of government resources, but also human lives, and it has failed to accomplish its objective,” he explained. “Prohibition policies have, by and large, caused more harm to people and communities than the drugs they were intended to eliminate, and they haven’t come anywhere close to eliminating the supply or the demand.”

Last October, the International Drug Policy Consortium (IDPC), a global coalition of 170 nongovernmental organizations working on drug policy issues, released a report that highlighted the “spectacular” failure and global increase in violence that has been caused by the war on drugs. Instead of curbing the problem, “consumption and illegal trafficking of drugs have reached record levels,” Helen Clark, former prime minister of New Zealand and a member of the Global Commission on Drug Policy, wrote in the document’s foreword.

A couple attends a rally in support of the legalization of marijuana at the Alameda Central Park in Mexico City, on May 4. One in five prisoners globally are incarcerated due to drug-related crimes, often for simply possessing cannabis or other illicit substances.PEDRO PARDO/AFP/GETTY IMAGES

The IDPC report found that there had been a 145 percent increase in drug-related deaths over the previous 10 years. The number of deaths reached an estimated 450,000 in 2015 alone. Drug overdose deaths have also skyrocketed, with 71,000 overdose deaths in the U.S. alone in 2017. Additionally, one in five prisoners globally are incarcerated due to drug-related crimes, often for simply possessing cannabis or other illicit substances.

“Mexico’s president is rightly identifying one of the major drivers of violence and corruption in his country: the prohibition of drugs,” Maria McFarland Sánchez-Moreno, the executive director of the Drug Policy Alliance, a nonprofit that advocates for ending the war on drugs, said in an emailed statement to Newsweek. “The next step is to translate words into action, by pursuing both a domestic and international agenda of drug policy reform, grounded in respect for human rights.”

AMLO’s policy plan shouldn’t have come as a surprise to Mexican voters. During his campaign and after winning election, he has consistently called for major reforms to his country’s prohibition on drugs. Mexico’s Supreme Court also issued its fifth ruling on cannabis prohibition at the end of last October, determining that punishing people for using the drug violated the constitution. Mexican lawmakers have since worked to push forward legislation to regulate the use of recreational mairijuana.

“More and more countries are developing programs for regulating cannabis for medical and adult use, and there is a growing sentiment that drug use should be treated more like a public health matter than a criminal justice issue,” Hawkins told Newsweek .

A woman waves a flag with a marijuana leaf to celebrate National Marijuana Day in Ottawa, Ontario, on April 20, 2016. With Canada’s decision to legalize and Mexico pushing to decriminalize all drugs, the U.S. may soon find itself isolated by its neighbors when it comes to drug policy.CHRIS ROUSSAKIS/AFP/GETTY IMAGES

Canada became the first major major economic power to legalize and regulate the sale of recreational cannabis last year. With Canada’s decision to legalize and Mexico pushing to decriminalize all drugs, the U.S. may soon find itself isolated by its neighbors when it comes to drug policy. Although 10 states and Washington, D.C., have legalized recreational marijuana, and more than 30 have legalized some form of cannabis for medicinal use, it remains classified as a Schedule 1 illegal drug by the federal government.

Polls have shown that legalizing marijuana nationwide enjoys bipartisan support. Republicans and Democrats have come together in Congress to support legalization as well as protecting states that have already legalized at the local level. President Donald Trump has previously suggested he is supportive of easing laws surrounding marijuana, although his administration has given mixed messages.

Attorney General William Barr said last month during testimony before a Senate Appropriations subcommittee that he would “still favor one uniform federal rule against marijuana.” However, he added that he thought the “way to go is to permit a more federal approach so states can, you know, make their own decisions within the framework of the federal law.”

Decriminalizing all drugs is not a perspective that is widely advocated or discussed in Washington. This week though, Denver became the first city in the country to pass a ballot measure to fully decriminalize psilocybin mushrooms, commonly known as magic mushrooms or simply shrooms.

“The vote [in Denver] shows again that the public is ahead of politicians on drug law reform—and shows the power and potential of public action in demanding it!,” the drug policy foundation Transform said in an email to supporters.

Posters in support of Ordinance 301, which decriminalized psilocybin mushrooms, adorn an election night watch party, in Denver, on May 7. MICHAEL CIAGLO/GETTY IMAGES

How the U.S. would respond to AMLO’s plan remains to be seen. Globally, however, it’s clear the conversation around drugs has shifted. Countries from Uruguay to South Africa to Georgia to Thailand have been reforming their drug laws, specifically when it comes to cannabis. Meanwhile, momentum has increased in the past few years within the U.S. as state after state has pushed through medical or recreational marijuana legalization.

Congressman Earl Blumenauer, a Democrat from Oregon, who co-founded the bipartisan Congressional Cannabis Caucus in 2017, told Newsweek last summer that he envisions marijuana will soon be traded across North American borders. “In the course of the next decade, I think there will be a North American cannabis market,” he said. If AMLO’s plan succeeds, that cross-border cannabis market could more likely come to fruition.

“Governments are increasingly finding they can neither justify nor afford maintaining the war on drugs,” Hawkins pointed out. “Leaders are looking for exit strategies, as we are now seeing in Mexico.”