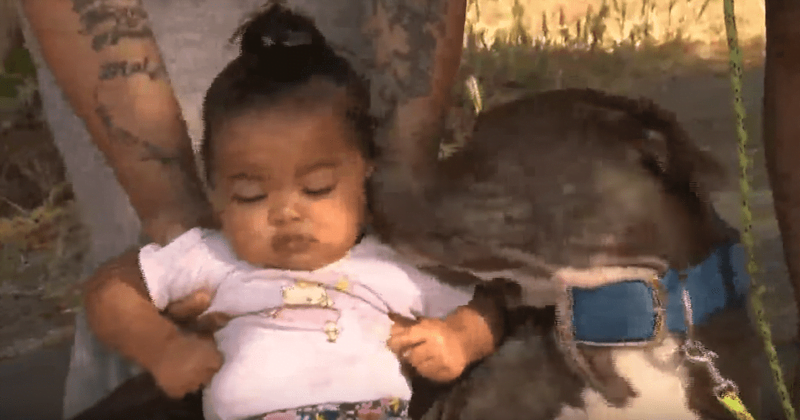 When a fire broke out at an apartment building in California, it was 8-month-old pitbull Sasha who alerted the family to the situation and dragged a baby out of the danger zone.

Pitbulls have a reputation for being aggressive and dangerous, but in reality, they’re one of the most caring dog breeds you can find. They’re also extremely brave, as California resident, Nana Chaichanhda, found last year. Sasha, an 8-month-old pitbull, ran into her apartment in Stockton to alert Chaichanhda of a raging fire that had begun to engulf the apartment building one night where Chaichanhda and her baby were fast asleep. Sasha began to bang on the back door of the house before anyone even realized that a fire had started. “I open it and she runs in and starts barking at me like crazy and I was like, ‘OK, this is weird. This is not like her,'” Chaichanhda told KTXL. When she ran into her bedroom to grab her child, she found Sasha already there, dragging the 7-month-old baby off the bed by the diaper. “She had already had my baby by the diaper and was dragging her off the bed,” she said. “I was like, ‘Oh my gosh, what are you doing?'”

While firefighters responded quickly to the emergency and were able to save most of the building, Chaichanhda’s home was made uninhabitable by the fire, and her neighbor’s home was destroyed. “Thanks to Sasha we were able to get out safe and call 911,” Chaichanhda wrote on a GoFundMe page intended to raise funds after her home was damaged in the fire. The woman’s cousin, who lives in the same building, also had her home destroyed but was not at home when the fire broke out. The family is now living with their aunts who reside in the same complex.

Chaichanhda credits Sasha, who is always by the family’s side, with saving their lives. “If she hadn’t begun barking like that, I never would have realized something was wrong,” she said of the heroic pup. “I owe her everything. If it wasn’t for her, I would have still been in bed and things could have taken a worse turn.” She said that it was one of the few nights that she left Sasha outside, and this probably saved the family’s life. She hopes that the pup’s heroics changes people’s views about keeping pitbulls as family pets. People have commented on reports of the incident to share their love for their caring pitbull friends as well.