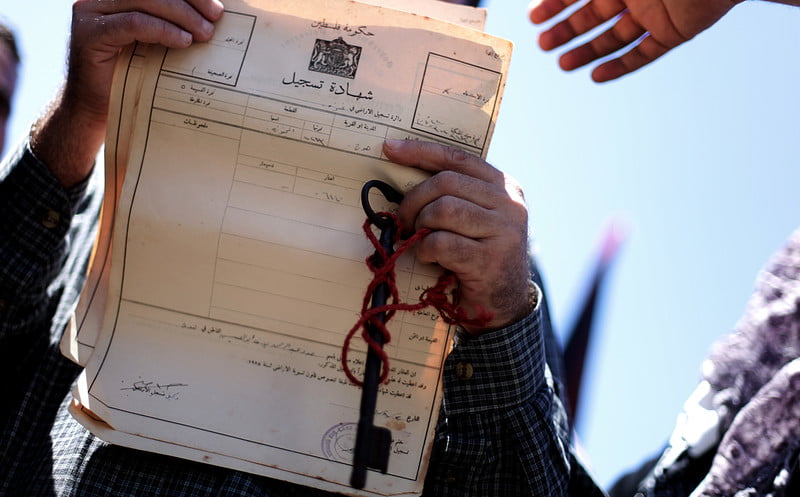 A Palestinian man shows the deeds to his land during a rally marking the Nakba. Ali JadallahAPA images

The attempt to suppress official documentation of the ethnic cleansing of Palestinians in 1948 is not new.

But efforts by teams from the Israeli defense ministry to remove sensitive documents from Israeli archives – as reported by the Haaretz newspaper recently – must be understood in a new political climate and are not simply an attempt to spare Israeli governments embarrassment, as some have suggested.

Those of us working with Nakba documents – Nakba means “catastrophe” and is the term Palestinians use for the expulsion in 1948 of some 800,000 people from their lands and homes in what became Israel – were already aware of the removal of these documents. For many years, for instance, historians were unable to revisit “the village files,” which formed an important proof in my argument that the 1948 war was an act of ethnic cleansing.

Some of the crucial material Benny Morris used on the Deir Yassin and al-Dawayima massacres could also not be not re-opened. They all detailed a more honest Israeli version of the causes leading to what was termed the “Palestinian exodus” in 1948.

Why are these files being hidden? In 2016, the journalist Lisa Goldman assumed that the reason was that the works of the “new historians” embarrassed the government and undermined Israel’s international standing.

But I think the reasons are far more profound and alarming. They are part of a new assault on Palestine and the Palestinians.

Taking the politics out of Palestine

We need to look at the attempt at censoring these archives in two contexts: the political and the historical.

Politically, the removal of these documents has to be seen as part of an overall American-Israeli initiative (or at least tendency) to try to depoliticize the “Palestine question.”

In Israel, this began with Benjamin Netanyahu’s ideas about an “economic peace,” the attempt to induce the Palestinians to give up their political demands in return for an improved economic reality.

It continued with the legislation of the Nakba Law, which withdrew any government funding for public bodies and institutions that would commemorate the 1948 events as a catastrophe.

An important part of this strategy includes Israeli actions on the ground – settlement expansion, house demolitions, village clearances – that bring us closer to an official annexation of Area C – approximately 60 percent of the West Bank – into Israel and the establishment of small Bantustans in the West Bank and the Gaza Strip.

A number of Israeli politicians and officials have been quite open about wanting to annex all or parts of the West Bank, including, of course, the prime minister himself.

Finally, there is the Israeli nation-state law, which passed in 2018. This law consolidated Israel as an apartheid state.

One particular clause in the law is relevant to our discussion: it stipulates that the right to exercise national self-determination in the country is “unique” to the Jewish people.

On the American side, meanwhile, the Trump administration has taken a number of steps that complement the Israeli attempt to erase Palestine as a political issue and Palestinians as a national movement.

These measures included the recognition of Jerusalem as Israel’s capital and the transfer there of the US embassy from Tel Aviv; ending financial support for UNRWA, the UN body that caters for Palestinian refugees; removing the PLO delegation from Washington; and a Bahrain conference focused on financial incentives for the Palestinians with no mention of any political rights.

Together, the Israeli and American campaigns amount to a new assault on Palestine and the Palestinians. The Palestinians are very vulnerable at this moment: Arab regimes are deserting them, the international community’s elite is indifferent, and Palestinians themselves are divided between Hamas and Fatah.

Israeli and American intentions combined with the vulnerability of the Palestinians bring us to a dangerous historical juncture. Israel is now in a position to attempt once more to act according to the logic of the “elimination of the native” (the anthropologist Patrick Wolfe’s characterization of the motives behind setter colonial movements such as Zionism).

Israel succeeded only partly in implementing this aim in 1948. The Palestinian national movement and people struggled succesfully then, and continue to struggle now, against the completion of the ethnic cleansing of 1948.

But this is a difficult moment. Abroad, efforts to shield Israel from criticism have intensified.

Pro-Palestinian politicians are defamed as anti-Semites. Legislation is being introduced in different countries to protect Israel from criticism and activism, including boycotts.

Removing archival material and the possible destruction of documents expose the deeper ideological motives behind this current assault on Palestine and the Palestinians.

How much has this undermined our ability to reconstruct what happened in the Nakba and for assessing its significance today?

In many ways, we have been here before. Israel looted the PLO archives in October 1982, destroyed part of them, transferred some of them to Israel and returned a small portion.

In 2001, Israel raided the Orient House in East Jerusalem and stole the archives there.

Now Israel raids its own archives to cleanse them of evidence of its past crimes.

Will this damage our ability to reconstruct the past?

In one way, no. The Palestinian refugees after 1948 did not need Israeli “new historians” to tell them that they were victims of ethnic cleansing.

Archival evidence is needed, though, to expose the intent and planning behind the crime and for contextualizing the past within a wider understanding of the nature of the Zionist movement and Israel.

For both purposes, documents already seen, and in many cases already scanned and digitized for posterity, are enough to prove beyond doubt the Zionist ideological intent behind the attempt to eliminate the Palestinians in 1948 and after.

While there is no one “smoking gun” document proving the full intent behind the ethnic cleansing – although, as the scholar Walid Khalidi commented, a paper known as Plan D came very close – there are enough discrete documents that together expose the crime against humanity Israel committed against the Palestinians.

As we move forward in time, from 1948 on, the information is more accessible and any attempt to destroy or hide it is bound to fail. Students, historians, pundits and activists can see very clearly the pattern of violence Israel inflicted and continues to inflict on the Palestinians (in this respect, one is reminded of another remark by Patrick Wolfe that settler colonialism is not an event but a structure).

Nevertheless, the origins of this structural violence is in the Nakba and therefore its documentation is important. It is this origin that explains Israeli policies since 1948: the imposition of military rule on Palestinians inside Israel until 1966 and its transition onto the occupied West Bank and Gaza Strip in 1967; the Judaization policy of expropriation of land and displacement in the Galilee, the Jerusalem area and the Naqab (Negev); the brutal repression of the two intifadas; the destruction of southern Lebanon in 1982 and 2006 and finally the inhuman siege on Gaza.

All these criminal policies can be proven without declassifying Israeli documents but are better historicized and contextualized if supported by documentation that show how – in the case of Israel – the “logic of elimination of the native” was being implemented.

We need to accumulate and present clearly what I would call indicative documents, which are very near to a “smoking gun” proof of the intention, inhumanity and purpose of the 1948 ethnic cleansing. I have displayed several of these documents on my public Facebook page, but we need proper archives that can be safeguarded from a state and an international coalition that wants to erase Palestine from our historical memory and to diminish it into an economic question.

This is not the first nor will it be the last attempt to erase Palestine. Sometimes these attempts are hidden from the eye but are nonetheless are highly significant and can only be traced by professional historiography.

In March 1964, Israel demanded that American citizens who had passports issued with the designation “Palestine” would be issued with new passports without that designation. The US State Department complied.

“We will cease using ‘Palestine’ in passports as place of assignment and cease issuing, renewing, or amending passports with seal bearing word ‘Palestine’,” a telegram informed the US embassy in Jerusalem.

But Palestine is not designation, and not a place of assignment that exists only in archives, open or closed. It is a real country, under colonization and occupation.

We should all strive to continue to tell its history as it explains the present and influences our future.

The author of numerous books, Ilan Pappe is professor of history and director of the European Centre for Palestine Studies at the University of Exeter.