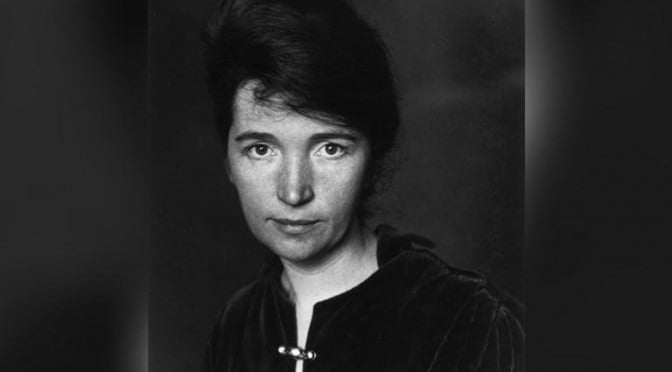 As the founder of America’s largest abortion chain, Margaret Sanger’s ideology for Planned Parenthood was cemented in eugenics, the belief and practice that aims to eliminate certain groups of people.

As a eugenicist, Sanger encouraged the sterilization of persons with less desirable qualities, and strongly encouraged the reproduction of groups with more desirable qualities. Sanger’s disdain for blacks, minority groups, and the diseased and disabled spawned the birth of an abortion corporation that profits off the killing of the weakest and most vulnerable. From its conception, Planned Parenthood was built upon the roots of exterminating individuals deemed “unfit” for the human family.

Today, the spirit of Sanger lives on. According to the Guttmacher Institute, the former pro-abortion research division of Planned Parenthood, African-American women are five times more likely to choose abortion over white women.

Below is a compilation of seven shocking quotes from Sanger, whose legacy birthed the corporation that became America’s largest abortion chain.

1) “We don’t want the word to go out that we want to exterminate the Negro population.” In a letter to Dr. Clarence Gamble in December, 19, 1939, Sanger exposited her vision for the “Negro Project,” a freshly launched collaboration between the American Birth Control League and Sanger’s Birth Control Clinical Research Bureau. The letter echoes the eugenic ideologies still visible within the corporate vein of Planned Parenthood today.


It seems to me from my experience…that while the colored Negroes have great respect for white doctors they can get closer to their own members and more or less lay their cards on the table which means their ignorance, superstitions and doubts.

We should hire three or four colored ministers, preferably with social-service backgrounds, and with engaging personalities. The most successful educational approach to the Negro is through a religious appeal.

We don’t want the word to go out that we want to exterminate the Negro population, and the minister is the man who can straighten out that idea if it ever occurs to any of their more rebellious members.

2) “I accepted an invitation to talk to the women’s branch of the Ku Klux Klan.”

In 1926, Sanger spoke at a meeting hosted by the women’s auxiliary of the Ku Klux Klan in Silver Lake, New Jersey. Following the invitation, Sanger describes her elation after receiving multiple speaking requests from white supremacy groups. She writes of the experience on page 366 of her book, An Autobiography:

I accepted an invitation to talk to the women’s branch of the Ku Klux Klan … I saw through the door dim figures parading with banners and illuminated crosses … I was escorted to the platform, was introduced, and began to speak … In the end, through simple illustrations I believed I had accomplished my purpose. A dozen invitations to speak to similar groups were proffered. In “Pivot of Civilization,” Sanger penned her thoughts regarding immigrants, the poor, and the error of philanthropy. Sanger’s ideology of racial and social hygiene bleeds through her writings on breeding an ideal human race:

Organized charity itself is the symptom of a malignant social disease…Instead of decreasing and aiming to eliminate the stocks [of people] that are most detrimental to the future of the race and the world, it tends to render them to a menacing degree dominant.

Sanger contends that philanthropy to help poor, struggling mothers does not offer women the opportunity to “avoid bringing into the world” more children, but encourages a “dead weight of human weight” that “healthier” societies must shoulder.

It encourages the healthier and more normal sections of the world to shoulder the burden of unthinking and indiscriminate fecundity of others; which brings with it, as I think the reader must agree, a dead weight of human waste.

4) “Birth control is nothing more or less than…weeding out the unfit.”

Sanger famously coined the term “birth control” with the intention of eliminating the reproduction of human beings who were considered “less fit.” In her writings from “Morality and Birth Control” and “Birth Control and the New Race,” the Planned Parenthood founder noted that the chief aim of the practice of birth control is to produce a “cleaner race.” Sanger’s vision for birth control was to prevent the birth of individuals whom she believed were unfit for mankind:

Knowledge of birth control is essentially moral. Its general, though prudent, practice must lead to a higher individuality and ultimately to a cleaner race.

Birth control is nothing more or less than the facilitation of the process of weeding out the unfit, of preventing the birth of defectives or of those who will become defective.

5) “Human beings who never should have been born at all.”

In “The Pivot of Civilization” and “A Plan for Peace,” Sanger describes the eugenic value of eliminating persons – minorities, the sick, and the disabled – through sterilization or segregation:

Our failure to segregate morons who are increasing and multiplying … demonstrates our foolhardy and extravagant sentimentalism … [Philanthropists] encourage the healthier and more normal sections of the world to shoulder the burden of unthinking and indiscriminate fecundity of others; which brings with it, as I think the reader must agree, a dead weight of human waste.

Instead of decreasing and aiming to eliminate the stocks that are most detrimental to the future of the race and the world, it tends to render them to a menacing degree dominant … We are paying for, and even submitting to, the dictates of an ever-increasing, unceasingly spawning class of human beings who never should have been born at all.

The main objects of the Population Congress would be to apply a stern and rigid policy of sterilization and segregation to that grade of population whose progeny is tainted, or whose inheritance is such that objectionable traits may be transmitted to offspring[;] to give certain dysgenic groups in our population their choice of segregation or sterilization.

6) “I think the greatest sin in the world is bringing children into the world – that have disease from their parents.”

In an 1957 interview with journalist Mike Wallace, Sanger advocated that the greatest evil is a family that chooses to bring children into the world. Sanger, who advocated for a system requiring every American family to submit a request to the government to have a child, told America Weekly in 1934 that it has “become necessary to establish a system of birth permits.”

7) “I believe that there should be no more babies in starving countries for the next 10 years.”

In a 1947 interview that surfaced via the British Pathe, Sanger described her desire for women to cease completely from having children for 10 years. When asked by reporter John Parsons if such a theory is anti-social, Sanger replied, “On the contrary. It seems to me that it is more practical and humane.”

Reporter: “What about the women who want babies now and in 10 years will not be able to have babies? How impractical, don’t you think?”

Sanger: “Oh, John, you sure ask hard questions. I should think that instead of being impractical, it is really very practical and intelligent and humane.”

Reporter: “But Mrs. Slee, in this country, having babies is the only thing left which is both unrationed and untaxed. Do you think that we really ought to stop?”

Sanger: “Well, I suppose a subject like that is really so personal that it is entirely left to the parent to decide, but from my view, I believe there should be no more babies in starving countries for the next 10 years.”

While the radical ideologies of Planned Parenthood’s founder permeated her writings, the abortion giant’s willingness to profit off the targeted killings of black Americans through abortion is still true today. As documented in a Live Actionundercover investigation, the abortion giant is willing to bankroll the destruction of black lives for profit.

The most obvious practitioner of racism in the United States today is Planned Parenthood, an organization founded by the eugenicist Margaret Sanger and recently documented as ready to accept money to eliminate black babies.