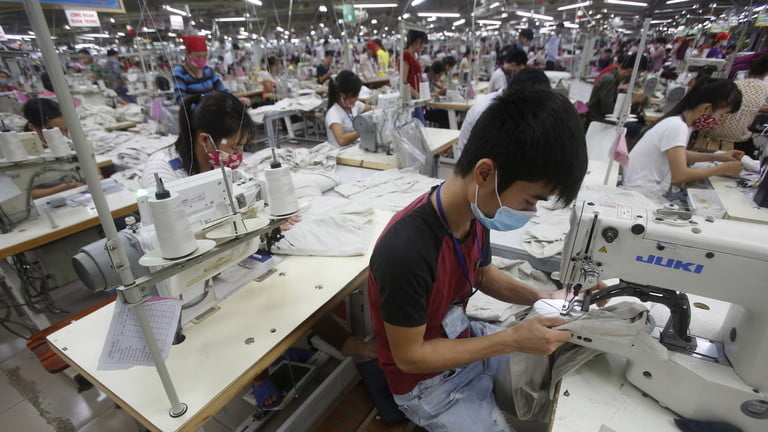 Labourers work at a garment factory in Vietnam for brands such as Nike, Adidas, H&M, Gap, Zara, Armani and Lacoste © Reuters

There were 40.3 million people living in conditions of slavery in 2018, mostly women, a recent report by the Walk Free Initiative shows. Researchers say slavery did not end with abolition in the 19th century but just changed form.
The initiative undertakes research to build the world’s most comprehensive evidence-base of modern slavery. While there isn’t an official legal definition of modern slavery, the UN describes it as the condition of people whose work “is performed involuntarily and under the menace of any penalty.” The organization and its member states committed to eliminating slavery by 2030, along with human trafficking, forced labor, and child labor.

According to Walk Free, modern slavery is increasing, particularly in business supply chains.

Katharine Bryant, the manager of global research for Walk Free, told Quartz that some 16 million victims of slavery work within poorly-monitored supply chains. That doesn’t include child labor, or exploitative work conditions that don’t limit freedom of movement.

Fewer than 40 of the 183 countries (out of 193 UN member states) surveyed have systems and laws to prevent businesses from buying products that may have used slave labor somewhere along the line of production. Despite those laws being in place, countries are failing to enforce them effectively.

The report points out that the global circulation of goods makes it extraordinarily challenging to ensure products are slave-labor free because it’s hard to track.

Many countries that supply consumer goods have a high percentage of people working in conditions of slavery, enduring long shifts and exhausting conditions without the option to leave. Fashion and tech industries are the main sectors known for their use of forced labor.

The US imports the largest volume of goods that are made with slave labor at some point before it reaches the consumer, according to the report. This is happening despite efforts and laws passed to address the phenomenon.

“Labor exploitation is a spectrum,” said Bryant, adding the more nuanced the abusive practice, the harder it is to define and control it. Lack of education among people at risk of exploitation is another important element which is missing, according to the researcher.

“We see cases where people have been exploited and didn’t realize they were in slavery conditions,” she said.