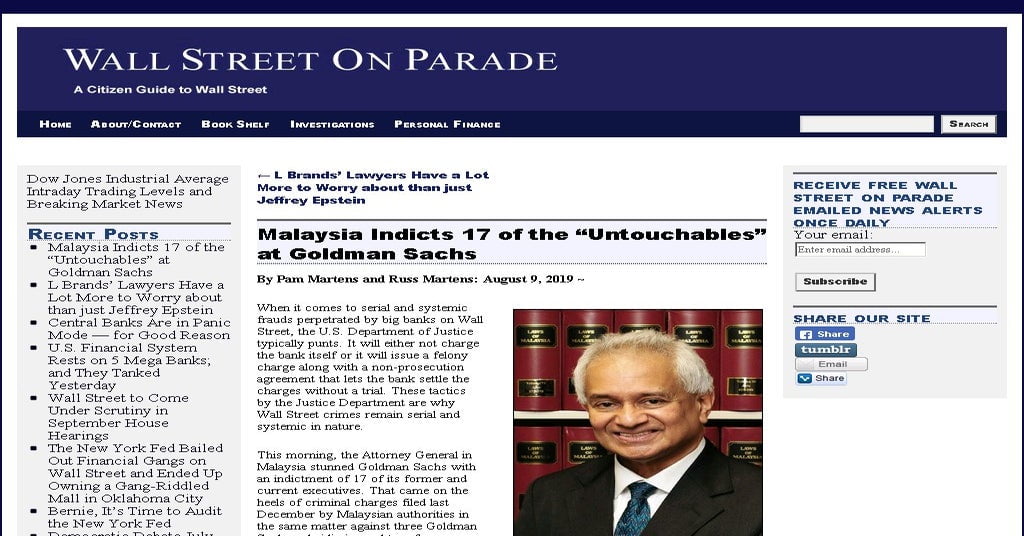 When it comes to serial and systemic frauds perpetrated by big banks on Wall Street, the U.S. Department of Justice typically punts. It will either not charge the bank itself or it will issue a felony charge along with a non-prosecution agreement that lets the bank settle the charges without a trial. These tactics by the Justice Department are why Wall Street crimes remain serial and systemic in nature.

This morning, the Attorney General in Malaysia stunned Goldman Sachs with an indictment of 17 of its former and current executives. That came on the heels of criminal charges filed last December by Malaysian authorities in the same matter against three Goldman Sachs subsidiaries and two former Goldman employees, Tim Leissner and Roger Ng.

Malaysia Attorney General Tommy Thomas said jail time and criminal fines will be sought against those indicted given the “severity of the scheme to defraud and fraudulent misappropriation of billions in bond proceeds” and “the lengthy period over which the offences were planned and executed….”

The 1MDB Malaysian fund was established in 2009 by then Prime Minister Najib Razak on the pretext of using it for economic development. Razak has also been indicted in Malaysia and has pleaded not guilty.

The whereabouts of some of the money is known: it bought luxury real estate, a private jet, paintings by Van Gogh and Monet. Some of the money even was invested in the Hollywood film, The Wolf of Wall Street starring Leonardo DiCaprio.

Contrast how Malaysia has moved to hold key Goldman Sachs executives accountable versus what the U.S. Department of Justice has done. On November 1 of last year, the Justice Department announced charges against former Goldman employees Tim Leissner and Roger Ng and a financier involved in the dealings, Jho Low. But the Justice Department did not bring charges against any of the three units of Goldman Sachs that were involved and its press release is even too timid to mention the name Goldman Sachs. It refers simply to “U.S. Financial Institution #1,” suggesting it believes Goldman Sachs somehow deserves reputational protection.

It’s important to recall that the Justice Department let Goldman Sachs wiggle out of criminal prosecution with a payment of $550 million in 2010 over its role in facilitating a $1 billion fraud called Abacus. Goldman Sachs allowed the hedge fund, John Paulson & Co., to select mortgage bonds that were likely to fail to put into the deal so that the hedge fund could short the deal and end up making $1 billion. Goldman Sachs pitched the deal to its investors as a sound investment. Those investors ended up losing the same $1 billion that Paulson & Co. made in profits. A lowly Goldman Sachs’ salesman on the deal, Fabrice Tourre, was the only Goldman employee to be charged in the matter. Tourre was found guilty at trial but also got off by paying a fine. (See John Paulson and the Ick Factor at NYU.)

Then there was the case of Carmen Segarra, the bank examiner at the Federal Reserve Bank of New York, who wanted to flunk Goldman Sachs on its examination for failing to have a firm-wide conflict of interest policy. Segarra got fired instead but not before she had purchased a tiny microphone and tape-recorded the crony conversations her bosses were having about Goldman Sachs. When Segarra attempted to get justice in a Federal Court in Manhattan, she belatedly learned that her Judge’s husband had received a fortunate legal advisory job from Goldman Sachs. (See A Mangled Case of Justice on Wall Street.)

It’s also important to remember the PBS Frontline program in 2013 which exposed that the Justice Department was not using any of the standard law enforcement tools to bring criminal charges against Wall Street banks and their executives: no subpoenas, no wiretaps. This is the relevant part of the transcript of that program with Frontline Producer Martin Smith and the then head of the Justice Department’s Criminal Division, Lanny Breuer. The program was appropriately titled “The Untouchables.”

NARRATOR: Frontline spoke to two former high-level Justice Department prosecutors who served in the Criminal Division under Lanny Breuer. In their opinion, Breuer was overly fearful of losing.

MARTIN SMITH: We spoke to a couple of sources from within the Criminal Division, and they reported that when it came to Wall Street, there were no investigations going on. There were no subpoenas, no document reviews, no wiretaps.

LANNY BREUER: Well, I don’t know who you spoke with because we have looked hard at the very types of matters that you’re talking about.

MARTIN SMITH: These sources said that at the weekly indictment approval meetings that there was no case ever mentioned that was even close to indicting Wall Street for financial crimes.

At 10:00 a.m. this morning, after the stock market had been open for 30 minutes, Goldman Sachs’ stock had lost very little ground despite the news of 17 criminal indictments related to its role in 1MDB. It was trading down less than one-half of one percent – very much in line with other big Wall Street banks. Perhaps that’s because Goldman Sachs has something else going for it – the Securities and Exchange Commission allows it to trade its own stock in its own Dark Pool. (See Wall Street Banks Are Trading in Their Own Company’s Stock: How Is This Legal? and Goldman Sachs Is Quietly Trading Stocks In Its Own Dark Pools on 4 Continents.)