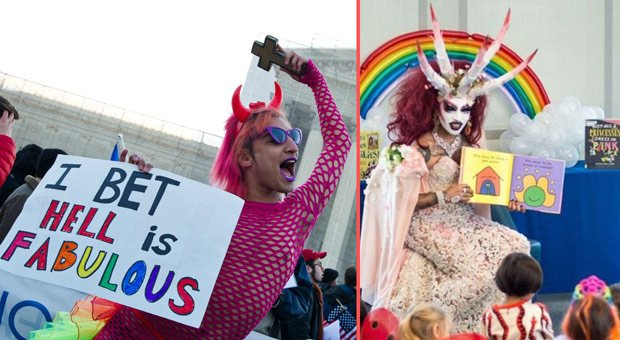 A church in Southern California was vandalized with spray-painted satanic symbols and vulgar phrases early Sunday, after its pastor openly opposed a Drag Queen Story Hour (DQSH) event, according to reports.

Police are investigating the incident as a possible hate crime because the target is a religious institution, KNSD-TV reported.

The executive pastor of South Bay Pentecostal Church in Chula Vista, near San Diego, says he believes his church was targeted because it opposes an upcoming Drag Queen Story Hour.

“Sure enough, at every corner, there were phrases, hateful words, and graffiti on the walls of our church,”

Huizar said.The pastor says he feels “there is no doubt” his church was targeted because of its opposition to the DQSH event.

“We feel that maybe, perhaps, those two are connected.” 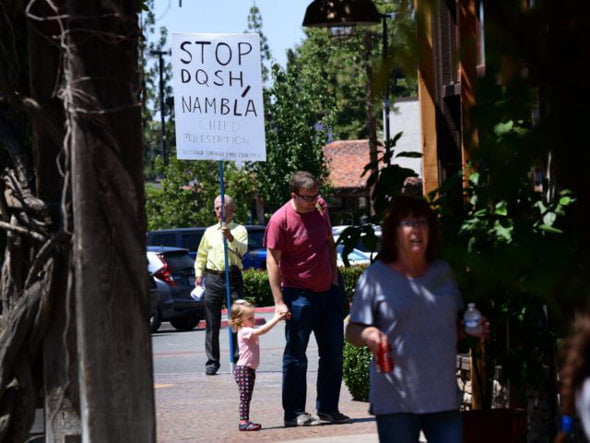 The church was opposed to DQSH and NAMBLA – North American Man/Boy Love Association According to Breitbart, many of the symbols and messages scrawled on the walls were reportedly associated with Satan.

Huizar said the church’s surveillance system captured two men parking their sedan in the church parking lot at around 3:00 am Sunday and walking toward the building.

Fifteen minutes later, they are seen jumping back into the car with what looked to be spray cans in their hands.

Huizar has since filed a hate crime report to Chula Vista Police and asked for increased patrols.

The pastor said the event is not appropriate for young children and should not be funded by taxpayer dollars. “If the people want to make that happen, do it at a private setting, at a book store or at a home, but not at the Chula Vista Public Library,” Huizar said.

The battle over the drag queen event intensified last week as an LGBT-activist member of the city council accused pro-family protesters of the events of holding “white supremacist beliefs.” 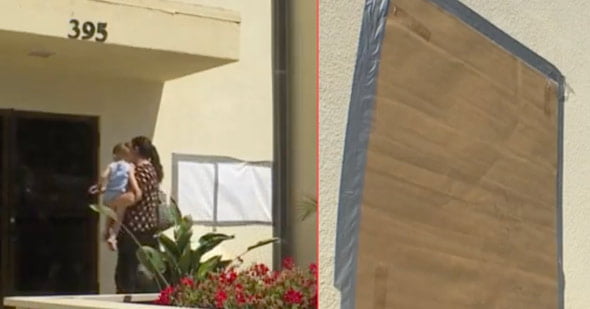 I am disappointed that some voices both from inside and outside our community have chosen to use the upcoming Drag Queen Storytime as an opportunity to perpetuate long discredited false and discriminatory narratives targeting the LGBTQ+ community in the name of protecting children.

This is wrong and must be called out for what it is – the spreading of ignorance, fear, and hate.

Much of this fearmongering is being organized by the local chapter of a nationally known hate-group which promotes not just anti-LGBTQ beliefs, but also anti-immigrant and white supremacist beliefs.

These ideas and tactics do not reflect the community I love and serve.“

None of us hold anti-immigrant, white supremacist, or hateful beliefs of any kind,” said Arthur Schaper, organization director for MassResistance, in a statement to Breitbart News.

“This is a tired smear from the pro-LGBT left to target and silence critics of this agenda, nothing more.”

The ongoing debate over #DragQueenStoryHour has taken an unexpected turn after a city official accused protesters of an event at a California library of holding "white supremacist beliefs," according to reports.
READ MORE: https://t.co/Y0zKOvsv9N
#ChulaVista #MassResistance

The protesters rallied in front of the main branch of the Chula Vista public library to condemn the Drag Queen Story Hour scheduled on September 10.

The library advertised the event as one that would encourage “reading, learning & inclusivity” among young children and “celebrate our wonderfully diverse community with stories, crafts, and dancing.”

The library states that the drag queen event was “sponsored in partnership with San Diego Pride and South Bay Alliance.”The American Library Association (ALA) encourages Drag Queen Story Hour events and is supporting those libraries experiencing “pushback” from their communities. “ALA, through its actions and those of its members, is instrumental in creating a more equitable, diverse, and inclusive society,” the organization states.“

This includes a commitment to combating marginalization and underrepresentation within the communities served by libraries through increased understanding of the effects of historical exclusion.

”According to the Drag Queen Story Hour website, the aim of the event is to present gender fluidity as a positive quality that children should accept and even emulate:

In spaces like this, kids are able to see people who defy rigid gender restrictions and imagine a world where people can present as they wish, and where dress-up is real.

#Transgender people are being sexually rejected by almost all straight people and most gays and lesbians, according to a recent study – Now trans activists are calling on the government to take action.
READ MORE: https://t.co/paYsmRMvi5
#Dating #Romance

Concerns about safety at the Drag Queen Story Hour events made headlines recently when Houston MassResistance discovered drag queen Alberto Garza, who uses the name Tatiana Mala-Nina when reading to young children, had been convicted in 2008 of sexually assaulting an eight-year-old boy.

The Houston library system had failed to perform a background check on Garza or any of the other drag queens appearing in its programs.

Multnomah County Library in Portland, Oregon, also faced backlash when it was found the library system had quietly removed from social media photos of the Drag Queen Story Hour that took place at one of its libraries during which young children were lying on top of the drag queens and fondling their false breasts.

Huizar said, regardless of the vandalism to his church, he will continue to speak out against the drag queen events with young children.

The pastor said he is meeting Monday with Chula Vista Mayor Mary Salas and plans to urge her to cancel the public library event and have it relocated to the private South Bay Pride Festival.

Huizar said, according to KGTV.“When you do something like a Drag Queen Story Hour, you are excluding a segment of the populous who are not in favor of this because of what we experienced today, or scared to speak out.”