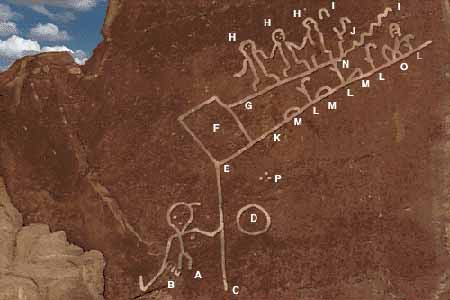 Near Oraibi, Arizona, there is a petroglyph known as Prophecy Rock which symbolizes many Hopi prophecies. Its interpretation is:

The “life path” established by the Great Spirit divides into the lower, narrow path of continuous Life in harmony with nature and the wide upper road of white man’s scientific achievements. The bar between the paths, above the cross, is the coming of white men; the Cross is that of Christianity. The circle below the cross represents the continuous Path of Life.

The four small human figures on the upper road represent, on one level, the past three worlds and the present; on another level, the figures indicate that some of the Hopi will travel the white man’s path, having been seduced by its glamour.

The two circles on the lower Path of Life are the “great shaking of the earth” (World Wars One and Two).

The swastika in the sun and the Celtic cross represent the two helpers of Pahana, the True White Brother.

The Hopi shield in the lower right corner symbolizes the Earth and the Four-Corners area where the Hopi have been reserved. The arms of the cross also represent the four directions in which they migrated according to the instructions of the Great Spirit.

The dots represent the four colors of Hopi corn, and the four racial colors of humanity.

Up until now, the Hopi Prophecy Rock’s interpretation regarding the division of the “life path” into the upper road of the White man’s pursuit of scientific achievements, has not been completely understood because it was not made clear that this development would occur on a different planet although it should have been understood since the upper path “disintegrates and dissipates” while the other path continues and thrives. Seldom do people ask, ”How can one society “disintegrate and dissipate” right next to or interspersed within, another society that continues and prospers?

But Enoch also prophesied about this exact same time, yet he provides greater details that few are familiar with. He specifically states that the wicked shall be removed from this planet.

Therefore, the upper road does not take place on this planet.

Here it must be said that good people who identify as “White” must separate themselves from the Elite and Whites with superiority complexes. This is not about skin color but frequency in the hearts and minds. Good White people must not allow themselves to be lumped into the same category with these people. The tendency to identify by color must end. Superiority complexes do not help anyone. Those who think they benefit are unaware of the trap they create in their consciousness that prevents them from Ascending and causes them to spend lifetimes trying to unravel the negative impact this complex creates on the consciousness.

Superiority complexes demand the suffering of others so that those who feel superior can feel better about themselves in comparison to whatever suffering exists in others. But this way of thinking was deeply programmed in those who hold this view. However, that experiment is over.

The last thing the Elites wanted was to have our consciousness seeded with the scenes of their destruction so they took the Book of Enoch out of the Bible because of the detailed account of the shutdown of this reality which they mocked in their Hollywood Movie X-Men: The Apocalypse.

Enoch said the wicked would be removed from this planet. He gave a detailed, behind the scenes look at the operation, including its beginning and it’s end. Those who feel they know a better way to reach their ascension by using science and technology will be allowed to do so on another planet, perhaps Mars, only if;

1) they lay down their arms,

2) assist with the shutdown of the current reality, and,

But they refused. Now they will be extracted by force. The force doing the work will confuse many because it is comprised of some ET responsible for creating this mess as well as the Benevolent ET who will be taking over during the Golden Age of Peace.

This mindset cannot remain on the planet during the Golden Age of Peace. The earth is entering a new Epoch and as with all changeovers of this particular nature, the controlling group of ETs changes. It has always been so. This is why the ET creators of this reality are working to extract their creation so that they can continue on a different planet. They made this mess and must clean it up if they want to continue on another planet. Only through the Son of Man can they safely reach their destination and goal, otherwise they face absolute destruction.

In fact, the frequencies on earth are about to reach a level where those who are not specific to that frequency will experience horrific physical damage and death. It has already started but will now pick up in speed. Spontaneous combustion will become much more commonplace in those filled with toxic thoughts and emotions. And no amount of underground area will shield them as the entire planet will be penetrated to its core. The Earth will no longer wait for humans to proceed with her own Ascension into a higher dimension.

They should thank their lucky stars if they should be so fortunate to get pinched and locked up for treason with a guaranteed ticket to Mars because what awaits them here on this planet is more horrific than any of their Hollywood movies could ever convey. Alfred Webre is mistaken about Trump being AI entrained to rule as president of the world here on earth. The Trump dynasty will rule on Mars (or whatever planet they chose for their next destination), but not on earth. Earth will enter into the Golden Age of Peace.

Before that happens, mental illness among the confused and mindless will soar to new heights. Witness the number of Comics being promoted whose routines are normalization electric shock and pharmaceuticals. Georgi Stankov said most people would “scream for drugs” by the time we reached this point in the Ascension process and he was right.

The best bet of the wicked Cabal is to give up and spill the beans so that they can escape to an atmosphere that will support their continued existence.