The battle to liberate the planet Earth is reaching a crescendo as Khazarian mafia puppet politicians are being systematically hunted down and killed or arrested, Pentagon and MI6 sources say.  At the same time, the cabal has initiated surrender negotiations, according to sources in the White Dragon Society and Earth Alliance.

A clear sign we are facing an unusual situation is that Israel shut down its embassies worldwide, ostensibly because of a labor dispute.  This shutdown is widely interpreted as nuclear blackmail, since Israeli embassies are known to contain nuclear weapons.  However, Pentagon sources say Israel was forced to shut down all of its embassies “because they may house nukes, weapons of mass destruction, and terror cells.”

Resistance leaders, who say much of the ongoing Western civil war is taking place in underground bunkers, provided this map of U.S. underground facilities to illustrate. 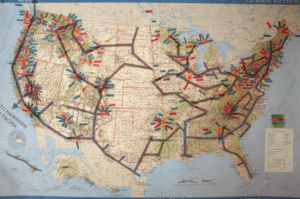 They say the most serious fighting is centered around the underground facilities in California, where cabal strongholds like Google, PayPal, and Facebook are located.  There are also underground bunkers in Switzerland, Greece, and Israel that are still fully under cabal control, the sources say.

For example, last week videos of Pelosi and Obama appeared to create the appearance they are still alive, but our sources on the ground say that neither of them has been seen in public in recent weeks.  We would say with a 90% certainty that those videos were created using computer graphics.

Mossad sources, meanwhile, say the “real Bibi Netanyahu” is in a deep underground base in Israel and the one seen publicly “is a double/clone.”  Mossad entrapment officer Jeffrey Epstein and fake ISIS leader Shimon Elliot “al-Baghdadi” are in the same bunker, the source says.

The undeclared civil war in the U.S. also took a decisive turn last week after the forensic discovery of IMF involvement in the campaign to remove Trump.  “A huge IMF loan to the Ukraine” authorized by then-IMF head Christine Lagarde “generated a large amount of cash that was then laundered into …

… the pockets of many of the exponents of the President’s ousting,” MI6 sources say.  Needless to say, taking bribes from foreign entities to oust a sitting president is treason, which is why so many politicians are being rounded up and sentenced to death, Pentagon sources say.  That’s also why corporate propaganda media reports of the “Ukraine impeachment hearings” now say everything is happening “underground.”

A counterattack is now being planned against Trump lawyer Rudi Giuliani, Canadian Secret Intelligence Service (CSIS) sources say.  “Giuliani will be going to jail soon.  This will open up the Big Story—that 9/11 was an inside job, as Giuliani was Mayor of New York when it happened.  He is very much involved and still is holding an Ace card up his sleeve, so to speak.  This has kept him breathing thus far.  Will he make it to prison, have an accident on the way, or hang himself in his jail cell?” the source wonders.

The Khazarian cabal also made two huge moves to retain control of the financial system last week—one in Saudi Arabia, and one in Indonesia.

The move in Saudi Arabia centered around the recent “Davos in the Desert” event and the announcement of the IPO of Saudi Aramco, by far the world’s largest oil company.

“The Saudi Davos was a dud, as tech, media, and EU officials boycotted even a year after [the murder of Washington Post columnist Jamal] Khashoggi,” Pentagon sources say.  Indian President Narendra Modi, Brazilian President Jair Bolsonaro, Pakistani Prime Minister Imran Khan, and King Abdullah of Jordan were “only there to get Saudi money,” they say.  “Wall Street was there only for the Aramco IPO,” they added.  This IPO, the sources noted, failed to get anchor investors from Norway, Russia, China, India, Brazil, Japan, Korea, Canada, France, Germany, the UK, Warren Buffet, and Goldman Sachs.

The only reason Trump sent Jared Kushner and Treasury Secretary Stephen Mnuchin was “to offset the visits of leaders from Russia, India, and Brazil and the absence of EU leaders,” the Pentagon sources say.  “Aramco is effectively banned from the New York, London, Hong Kong, and Tokyo stock exchanges because they won’t allow an independent audit of their reserves, which have been depleting,” they add.

The other Middle Eastern news our Pentagon sources report is that Trump is withholding $105 million in military aid to Lebanon’s army in a move that “may cause Russia to strengthen Hezbollah and drive Lebanon closer to Russia and Iran.”

Iranian and Syrian leaders, for their part, are publicly praising Trump for at least being honest in admitting that U.S. troops are there to get oil, and not to fight terrorism.  Iran is now making a big peace initiative to counter the Zionist strategy of endless war.
https://sputniknews.com/middleeast/201911021077210205-irans-foreign-minister-will-send-letter-to-un-chief-on-tehrans-hormuz-peace-initiative/

Now, turning to Indonesia, we are seeing a massive cabal campaign to seize that nation’s gold.  Having failed with their fake Neil Keenan ploy, the Swiss and French Rothschilds’ agents are putting the screws on President Jokowi and have forced him to “appoint his arch-rival from the past two presidential elections, Prabowo Subianto, the former son-in-law of Suharto, as his defense minister,” CIA sources in Indonesia say.

The other ministers in his government are not happy, and neither are many of his supporters, the sources say.  “I have been told by a contact in Jakarta who is with BIN (the intelligence branch in Indonesia) that a very large amount of money in excess of $1 billion USD passed hands into Prabowo’s coffers,” one source says.
https://www.thestatesman.com/world/dark-day-for-human-rights-as-indonesias-pm-appoints-prabowo-subianto-as-defence-minister-1502813498.html

To add fuel to the fire, as the above link explains, “Among Jokowi’s 38 ministers, former World Bank managing director Sri Mulyani Indrawati was picked to serve another term as finance minister….”  The World Bank, of course, is controlled by the Rockefellers, etc.

Even if the cabal manages to grab Indonesia’s gold, they still face defeat because they do not control the world’s military and intelligence services.

In any case, as mentioned at the top, the cabal is negotiating at a very high level for a peaceful transfer of world power to the Asians and the Western-led world alliance forces, sources close to the negotiations said.

The Chinese had a big meeting last week where they reaffirmed that their meritocratic system of governance was more effective than the oligarchy and fake democracy of the West.  In the communiqué issued after their meeting, the Chinese said they will be “taking an active part in global governance and continuing to make contributions to the building of a community with a shared future for humanity.”  They added that such cooperation was premised on “unity of independence and self-reliance.”
http://www.xinhuanet.com/english/2019-10/31/c_138518832.htm

A negotiator for the ruling Western elite, for his part, said, “The global ruling class have no objection to the People if they show themselves capable of understanding and taking on the challenges of running a planet.”

One big debate in the in the West is just how much financial control is to be left in the hands of the ruling class, the source said.  “The new financial system has been designed with a security services back door,” he admitted.  “We need to figure out if the public will accept super-deep mass surveillance of their financial lives,” he noted.  “I say if you do nothing wrong, you have nothing to worry about.  They need to decide if they want mass criminality or no criminality,” he said.  “Having done a deep dive on terrorism financing, anyone who knew what I knew would accept [these back doors],” he explained.

The source also said there was a consensus that a meritocratic future planning agency should be set up with a huge budget to start a Western equivalent to the multi-trillion-dollar Chinese Belt and Road Initiative.

The other thing that is going on is that a new negotiations channel is being opened between the Western military-industrial complex and the Chinese to discuss the release of secret Western UFO, fusion, and other technology to the rest of the world, White Dragon Society sources say.  The talks are likely to begin in late November following a visit by Pope Francis and top U.S. General Mark Milley to Japan, they say.  Milley is due in Japan in mid-November, while Pope Francis is due to visit November 23-26.

The other thing that will be discussed is the removal of the criminal, treasonous regime of the slave Japanese Prime Minister Shinzo Abe, the sources say.  Abe has been trying to set up germ warfare facilities and is involved with Japanese crime gangs in corruption related to the 2020 Tokyo Olympics, Japanese right-wing sources say.  The removal of Abe and his supporters is a necessary precondition to the reunification of the Korean Peninsula and peace in East Asia, the sources say.