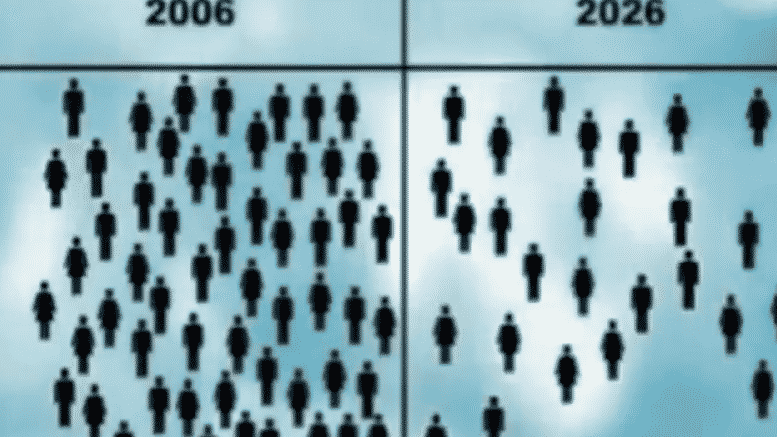 ER Editor: From Stratfor in early 2018 we recommend this piece – Fertility Rates Keep Dropping, and It’s Going to Hit the Economy Hard.

Contrary to UN and globalist propaganda, global populating is crashing, not exploding. The birthrate in many countries is so low that they will cease to exist as discrete nations. For many, the trend is already irreversible. Declining population guarantees huge reductions in economic activity, productivity and economic security. Inflation will turn to deflation, and wars will be fought over precious resources. ⁃ TN Editor

Population growth is vital for the world economy. It means more workers to build homes and produce goods, more consumers to buy things and spark innovation, and more citizens to pay taxes and attract trade. While the world is expected to add more than 3 billion people by 2100, according to the United Nations, that’ll likely be the high point. Falling fertility rates and aging populations will mean serious challenges that will be felt more acutely in some places than others.

While the global average fertility rate was still above the rate of replacement—technically 2.1 children per woman—in 2017, about half of all countries had already fallen below it, up from 1 in 20 just half a century ago. For places such as the U.S. and parts of Western Europe, which historically are attractive to migrants, loosening immigration policies could make up for low birthrates. In other places, more drastic policy interventions may be called for. Most of the available options place a high burden on women, who’ll be relied upon not only to bear children but also to help fill widening gaps in the workforce.

Each of the following indicators tells a part of the global fertility story: not just how many babies women have on average, but also how well women are integrated into the workforce, what slice of the income pie they receive, and their level of educational attainment. Overall: 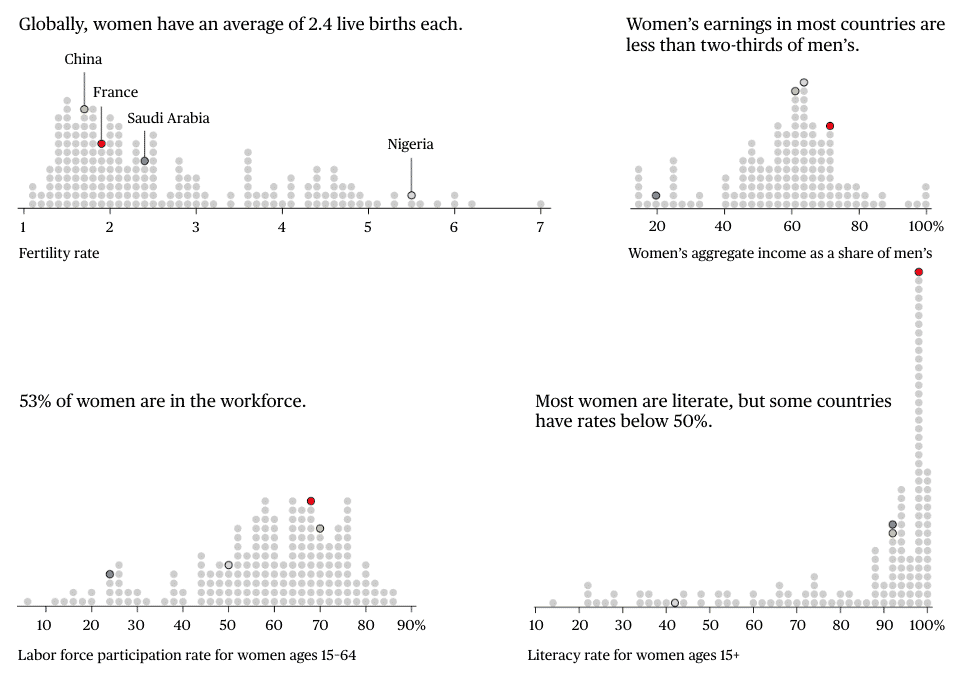 Government attempts to manage population growth are nothing new—consider the generous paid maternal leave of the Scandinavian countries or China’s recently rescinded one-child policy, each relatively effective in achieving its stated goal—but a new sense of urgency and even desperation is creeping into the search for ways to reverse the current trends. That said, achieving robust population growth is by no means the only contributor to economic growth—in some countries too-high fertility may actually be a drag on GDP, because of higher costs. But as these indicators suggest, it can be an important tailwind.

To explore these demographic and economic shifts, Bloomberg analyzed fertility data for 200 countries and picked four that were outliers in some respect. Local reporters then interviewed one woman in each place about her economic and cultural forces that shaped her choice to have children—or not.

ER: we left in the final paragraph of the Bloomberg article –

Ultimately, no country will be left untouched by demographic decline. Governments will have to think creatively about ways to manage population, whether through state-sponsored benefits or family-planning edicts or discrimination protections, or else find their own path to sustainable economic growth with ever fewer native-born workers, consumers, and entrepreneurs.