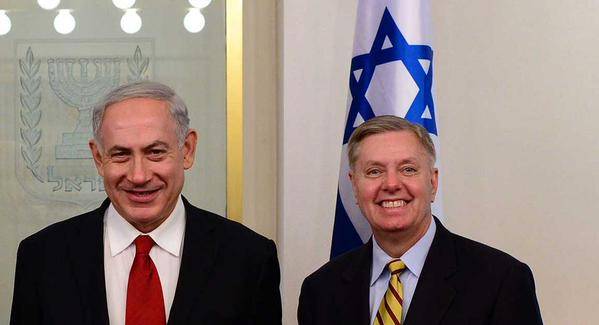 Israel will have impunity to start wars with everyone

Last September, Donald Trump and Benjamin Netanyahu hinted that they were working on a mutual defense pact. Such a treaty, if signed, would officially and permanently mandate an American military intervention if Israel were to ever start a conflict with its neighbors.

The Trump administration is desperate to get this done, but Netanyahu is having trouble selling the idea to his rival Benny Gantz. The Likud party has so far been unable to form a government and Netanyahu is battling corruption charges. As a side note, two major GOP donors, Sheldon Adelson and Larry Ellison, are defense witnesses in Bibi’s case.

The major reason why some sectors of the Israeli state want Netanyahu gone is that they believe his government’s belligerence is responsible for Iran’s stunning rise. Netanyahu has chosen Israel-above-all unilateralism using Zion’s cats-paws in Washington to try and bully Tehran, but have walked all over Chinese and Russian interests in the process.

Two years into the Trump/Israel “maximum pressure” campaign, Iran is not only more powerful than before, it is participating in joint war games with China and Russia. This has angered competing Jewish factions inside Israel, who preferred the Obama method of passively subverting Iran through its countries pro-US/pro-Europe “moderate” liberal reformists. Hassan Rouhani, who they saw as the Persian “Gorbachev,” has now been fully discredited in the eyes of his people thanks to Trump and Netanyahu.

While all segments of Israeli society are having a public debate on the pros and cons of a military pact for their country, here in the US nobody has consulted with the 1.3 million active-duty American servicemen who will die in a world war to expand Israel’s borders.

Lindsay Graham has told Jews at private events that he is working on this bill and is confident it will be ratified in the Senate. So far, the only people within US borders participating in this conversation are the Republican Jewish Coalition and JINSA (Jewish Institute for National Security of America). The latter fifth column is writing the terms of the treaty.

Last July, JINSA released details of the pact they want Graham to push through, titled “For a Narrow US-Israel Defense Pact,” which can be obtained online (I will not link to downloads on JINSA’s website for security reasons).

The policy paper demands that Israel be granted special access to intelligence collected by the “Five Eyes Alliance” (Australia, UK, New Zealand, Canada and the US), officially turning the entire Anglo-Saxon world into a global Jewish spy network (which is already unofficially true).

Furthermore, it calls on the war clause be triggered if any country “threatens” to use chemical of nuclear weapons against the Jewish state or physically undermines Israel’s economic activities. This is very open-ended.

The most ludicrous part of the Graham/JINSA’s treaty is section 3.4, where Israel is under no obligation to notify or seek approval from the United States when it decides to engage in a military attack against another party.

In other words, if Israel decides to start a war with Iran (or China, or Russia, or all of them), it doesn’t have to discuss this with its “ally” first. Israel reserves its right to act unilaterally and America must go along for the ride whether we want to or not.

America gets absolutely nothing from joining such an agreement, except the possibility of a catastrophic world war that can be started by unstable psychopaths like Benjamin Netanyahu without warning, whenever they please.

The US has not signed a mutual defense treaty since 1962.

It’s time the 98% start demanding Donald Trump and Lindsey Graham include us in this debate, and prepare to protest as soon as this bill hits the Senate floor.