Prepare For Change
Home ARCONTES Mother Explains Why Her Daughter’s Death From Vaccines Isn’t Reported In The... 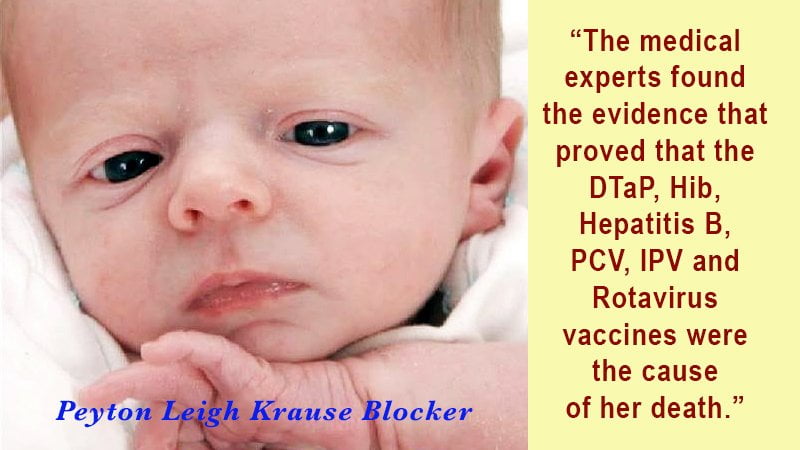 It will be instructive for our conversation to understand exactly how the U. S. government’s Vaccination Injury Compensation Program (VICP) works. This is what the government website tells us:

The National Vaccine Injury Compensation Program is a no-fault alternative to the traditional legal system for resolving vaccine injury petitions.

It was created in the 1980s, after lawsuits against vaccine companies and health care providers threatened to cause vaccine shortages and reduce U.S. vaccination rates, which would have caused a resurgence of vaccine preventable diseases.

Any individual, of any age, who received a covered vaccine and believes he or she was injured as a result, can file a petition. Parents, legal guardians and legal representatives can file on behalf of children, disabled adults, and individuals who are deceased.

A cursory glance at this may lead one to believe that this program is a reasonable under the circumstances. A more thoughtful analysis, however, can lead to the conclusion that this program may be the greatest coup in the history of the world in favor of business interests over human well-being.

Furthermore, A 2010 HHS pilot study by the Federal Agency for Health Care Research (AHCR) found that 1 in every 39 vaccines causes injury, a shocking comparison to the claims from the CDC of 1 in every million. Only percent of vaccine injuries are even reported, yet the National Childhood Vaccine Injury has still paid billions to families of vaccine injured children. You can read more about that here.

Instead, the cause of death on the death certificate often remains the amorphous ‘Sudden Infant Death Syndrome’ (SIDS) or, as told below by the mother of a 6-week old child who died from vaccination, ‘Sudden Unexplained Death in Infancy’ (SUDI). How can these counter-scientific ‘conditions’ or ‘syndromes’ be anything more than fancy made-up names to prevent further and wider investigation into the cause of death of an infant?

Wikipedia says that ‘Sudden infant death syndrome (SIDS) is the sudden unexplained death of a child of less than one year of age. Diagnosis requires that the death remains unexplained even after a thorough autopsy and detailed death scene investigation…The exact cause of SIDS is unknown.’ In other words, SIDS = ‘We don’t yet know why this baby died’! It would not be unreasonable to deduce that this fancy acronym has been in effect for years to try to force closure on grieving parents, in order to prevent them from investigating further.

It is from the painstaking truth-seeking efforts of brave and relentless mothers like Cati Clobes and Kara Krause below, that the picture of what is actually going on comes into focus for all of us now. And hopefully, as we read these testimonies, our collective will to prevent these needless deaths and countless injuries from vaccines is unified and grows ever stronger.

The Testimony Of Kara Krause

Exactly a year ago, Kara Krause made a Facebook post detailing her experiences with the Vaccination Injury Compensation Program after her 6-week old child died soon after being vaccinated. She makes a number of important points, and one to pay particular attention to is the fact that, even though it was proven in court that the cause of her daughter’s death was the vaccines, this fact does not show up in official government statistics regarding the safety of vaccines!

I lost my daughter Peyton at 6 weeks old appropriately 12 hours after receiving her “2 month” vaccinations, 9 total. Her death being classified as SUDI (Sudden Unexplained Death in Infancy) Almost 2 years after her death I was told about the VICP (Vaccination Injury Compensation Program) (this is a “non fault” government run program funded by the pharmaceutical companies. It acts as an insurance policy to protect them from being sued for vaccination related deaths and injuries. Their cases go trial as any other court cases, but they are overseen by a master, not a jury. The master hears both the victim and governments arguments. If and only if, proven scientific data or testimony (not a casual link or circumstance) is presented by the plaintiffs, the master then decides on the amount of compensation to be awarded to the victim or their family.
I was told by the lawyers who accepted Peytons case, (apparently VICP lawyers take very few of the cases submitted to them) that in order to be able to pursue a wrongful death or civil case I had to go through the VICP process first. This was a complete lie.
(I blame myself for not doing more research on the program.)
The VICP process took approximately 2 1/2 years, in that time all my questions were answered, the medical experts found the evidence that proved that the Dtap was in fact the cause of her death, I thought this was a great thing. I now had scientific proof, expert testimony and a sum of money to be able pursue other suits, to bring awareness that vaccines actually do cause deaths.
What I didnt know, was filing with the VICP did not extend the statute limitations (as I thought) in essence making it legally impossible to file for a wrongful death, medical malpractice or any civil suit.
But at least I had the medical evidence to educate others, Right?? Instead what I’ve found is no one listens. Every pro-vaxxer spouts out statistical data and research trends to argue their case. Here in lies the problem; we arent capable of doing the same.
Victims of vaccination related death that go through the VICP are NEVER accounted for. Their “non fault” clause covers up the data that would reveal the truth behind these deaths.
My daughters death certificate will ALWAYS read, Sudden Unexplained Death in Infancy. Her death will NEVER be part of any statistical data that would show the truth behind vaccines. Her death (and many others) arent accounted for in any material Pro-vaxxers or doctors use to attempt to convince us on how safe and effective vaccines are.
Could you imagine the uproar if the government allowed the actual cause of my daughters death to be printed on her death certificate?? Could you imagine the billions of dollars that would be lost if Pro-vaxxers could read the words “Dtap, cause of death”
I’ve shared my daughters story many times, and in the hundreds of parents, family, friends, acquaintances, I’ve spoke to, only 1 has chosen not to vaccinate anymore (she was bullied by her infants pediatrician into giving her daughter the first round)
I’ve rambled enough. So my response to your question on how to answer; explain to him why you arent able to provide accurate percentages or annual findings. You now personally know of one infant death that will never be accounted for.
They will use the VAIRS response, VAIRS is reported information, not factual.

Her unrelenting effort to find the truth reminds us that for every Kara Krause and Caty Clobes, there must be hundreds of other women who have not agreed with the diagnosis of SIDS or SUDI but have lost their case or have not even filed petitions based on a lack of knowledge about it or a lack of means to do so. And these are the ones who went against their doctors. What about those that accept the doctor and cororoner’s word that their child had died from SIDS or SUDI? Overall, In 2017, there were 3,600 sudden unexpected infant deaths (SUID) in the United States (source). How many of those deaths would have been found to be due to vaccines, if our medical establishment really wanted to reveal the truth rather than hide it?

Why is it that we never hear about vaccine injury or deaths? According to a MedAlerts search of the FDA Vaccine Adverse Event Reporting System (VAERS) database, as of 2/5/19, the cumulative raw count of adverse events from measles, mumps, and rubella vaccine alone was: 93,929 adverse events, 1,810 disabilities, 6,902 hospitalizations, and 463 deaths.

It has been said that our personal evolution throughout history has gone the ‘way of the cross,’ meaning we have grown and evolved as individuals through our suffering. It is now crucial that we allow the suffering of others to drive our personal and our collective will to reach higher and do better for each other. The increase in vaccine mandates seems to be the issue of our times, the one we can truly galvanize around. While we have profound sympathy for those who have suffered, it is important now to build a collective resolve to end the source of that suffering. We should not stoop to violent condemnation but we can no longer settle for meek resignation. Hopefully we will look back at this time in our history as a watershed moment in which humanity took control of its destiny and began to create a world in which the sanctity of human life is respected above all else.