Prepare For Change
Home ARCONTES Netanyahu to Join Trump Next Week to Announce ‘Deal of the Century’... 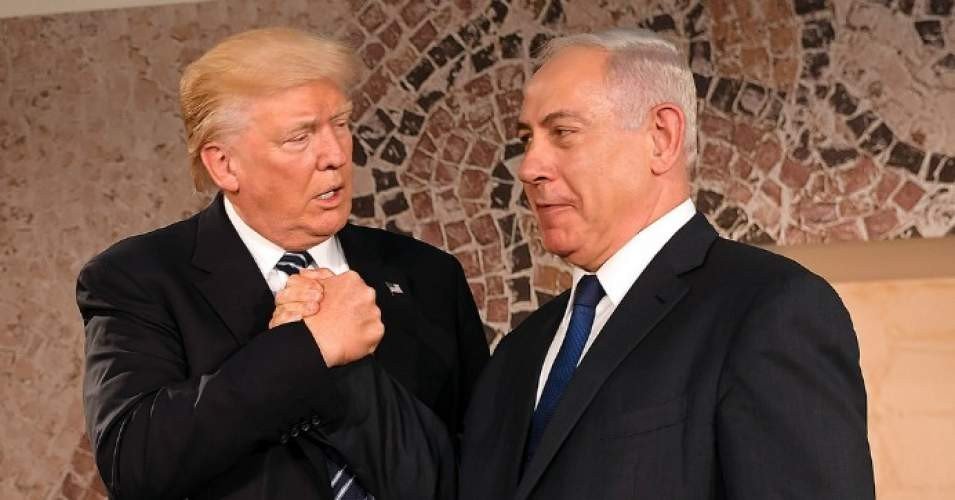 “A lethal diversionary tactic at the expense of Palestinian rights and international law.”

President Donald Trump is expected to host Israeli Prime Minister Benjamin Netanyahu and Netanyahu’s political rival Benny Gantz at the White House on January 28 to unveil the president’s “Deal of the Century” peace deal for the Middle East.

Though the full plan has not been released, the deal reportedly delivers nearly all of Israel’s demands in exchange for the possibility of maybe, someday recognizing a Palestinian state.

“Peace has nothing to do with it,” said Haaretz journalist Amir Tibon.

The plan, said one observer on social media, “gives Israel everything it wants.”

It quoted a White House source describing the current plan as “the most pro-Israel plan ever produced or presented.” A plan that no Palestinian leader could ever conceivably accept,

If the Palestinian Authority President Mahmoud Abbas rejects the already declared “dead on arrival” plan, they will be severely punish as Israel would will have US support to begin annexing settlements unilaterally and basically anything else they want.

“Palestinians are expected to beg for crumbs,” they added.

Vice President Mike Pence announced the White House meeting on Thursday during a visit to Jerusalem.

“President Trump asked me to extend an invitation to Prime Minister Netanyahu to come to the White House next week for talks,” Pence said.

“At the prime minister’s suggestion,” the vice president added, “I also extended an invitation to Benny Gantz.”

“The White House apparently thinks the two sides of the Israeli-Palestinian conflict are the Israeli right and the Israeli center,” tweeted University of Maryland professor Shibley Telhami.

According to the Times of Israel, the deal drastically undercuts Palestinian hopes for recovering land stolen by Israeli settlements and allows Israel to expand its territory even further:

The plan will be unveiled next week, and is the most generous US proposal ever for Israel, an unsourced Channel 12 report said, likely providing for Israeli sovereignty over all West Bank settlements alongside a recognition of Palestinian statehood.

The network said the plan apparently includes a “significant moving of the [Israeli] border” eastwards, without specifying.

The plan is unlikely to net support from Palestinians, the Europeans, or Arab states, journalist Neri Zibler said, meaning that the deal may be primarily aimed at helping Netanyahu’s political prospects. But rejecting the plan comes with its own set of consequences.

“Real danger on the ground is what an Israeli government does afterwards,” said Zibler. “Push for annexation (per the American plan) will be intense.”

The American peace advocacy group J-Street said the deal is all about giving Israel the green light to take more territory.

“The plan is expected to be the culmination of a series of steps taken by Trump and his team to advance the annexationist agenda of Prime Minister Netanyahu and the far-right settlement movement in Israel,” the group wrote. “The known contours of the plan appear designed to formalize, entrench, and legitimize permanent Israeli control of the occupied West Bank and to undercut any prospect of Palestinian statehood via a two-state solution.”

Next week’s meeting to discuss the plan will come smack dab in the middle of the president’s impeachment trial in the Senate, timing that was not missed by observers.

As impeachment trial continues, White House announces Israelis will be at the WH on Tuesday next week; Trump has a campaign rally that night in Wildwood, NJ. https://t.co/gr7ZvzFU93

The White House visit also comes on the very day Israel’s Knesset was scheduled to debate on whether or not Netanyahu’s position as Prime Minister makes the Israeli leader immune to prosecution on corruption charges.

Using the peace plan to distract both nations from their leaders’ foibles, tweeted PLO Executive Committee member Dr. Hanan Ashrawi, is “a lethal diversionary tactic at the expense of Palestinian rights and international law—criminality plus personal agendas equals no peace.”