Prepare For Change
Home ARCONTES ‘This Is Not a Peace Plan, It Is a War Plan’: Trump-Netanyahu... 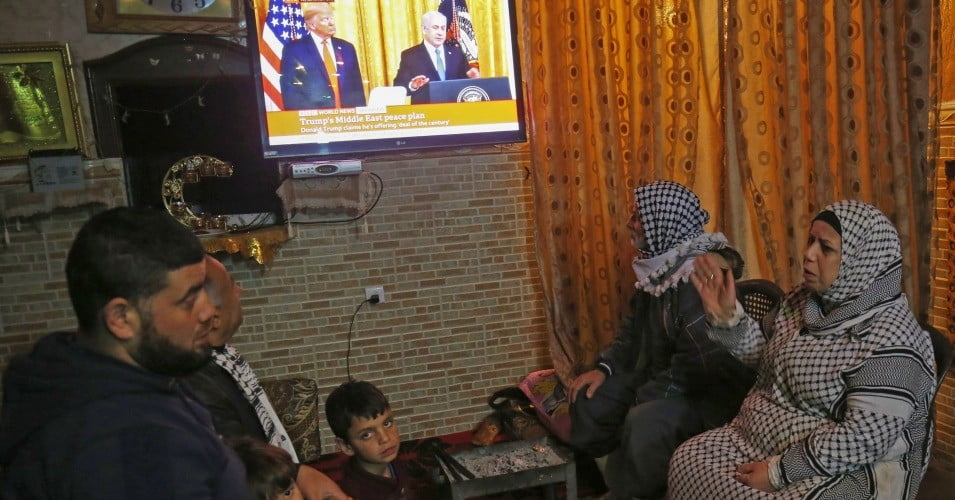 “Any attempt to address the Israeli-Palestinian issue that does not begin and end with the full acknowledgment of the Palestinian right to self-determination, freedom, justice, and equality is a non-starter.”

“This is not a peace plan. It is theft. It is erasure.”
—Rep. Ilhan Omar (D-Minn.)Critics joined Palestinian leaders in rejecting the premise of the so-called “vision for peace,” which was drafted by the White House and Netanyahu without the input of Palestinians.

They could have guaranteed justice, and brought everyone into this peace deal.

Instead these two embattled heads of state, impeached and indicted, have a “ just us” peace deal.

The plan aims to expand and make official Israeli control of Palestinian territories while assuring Palestine that it will be afforded “a pathway to a future state”—but one that will have no military of its own and in which Israel will maintain security control over some areas.

“This is not a peace plan,” tweeted Yousef Munayyer, executive director of the U.S. Campaign for Palestinian Rights. “It is a war plan.”‘

This is not a peace plan, it is a war plan.

A war on Palestinian existence

“It’s stunning that Donald Trump doesn’t know that this is insulting to Palestinians,” tweeted James Zogby, founder of the Arab American Institute.

“This plan is simply a rubber stamp for the Israeli government’s continuing violations of international law, separate-and-unequal policies, land grabs, and human rights abuses against the Palestinian people,” said the U.S. Campaign for Palestinian Rights in a statement. “Any attempt to address the Israeli-Palestinian issue that does not begin and end with the full acknowledgment of the Palestinian right to self-determination, freedom, justice, and equality is a non-starter.”

Major points within the deal include:

Jerusalem will be established as Israel’s “undivided” capitol, undermining Palestinians’ aim to recognize East Jerusalem as their capitol;
the recognition of the majority of Israeli settlements in occupied Palestine;
the recognition of the Jordan Valley, which makes up a third of the occupied West Bank, as part of Israel; and
the refusal by Israel to grant Palestinians the “right to return” to their homes lost in the Six-Day War and other conflicts.
Palestinians in occupied territories held protests on Tuesday ahead of the deal’s announcement. Larger demonstrations are planned for Wednesday.

“I am not against peace, but what is being talked about is not peace,” Ahmed Shafiq, a student in Gaza, told The Guardian. “Peace is not imposed on people.”

The so-called “peace deal” amounts to “an endorsement of Israel’s aggression, allowing it to take over whatever Palestinian lands it wants and punishing the victims for daring to object to having their homeland stolen,” said Omar Baddar, deputy director of the Arab American Institute, in a short video the group released.

Want to know why this "ultimate deal" is a sham & a disgrace that will never lead to peace? @OmarBaddar explains:#DealOfTheCentury #Apartheid pic.twitter.com/1k9Ig0q9ND

“This is not a peace plan,” tweeted Omar. “It is theft. It is erasure.”

Munayyer of the U.S. Campaign for Palestinian Rights called on Americans and the international community to reject Trump’s attempt to “whitewash the apartheid reality alongside his Israeli partners-in-war-crimes.”

“The only suitable response from people of conscience is to reject this effort and demand immediate accountability for Israel’s denial of Palestinian rights,” Munayyer said. “The separate-and-unequal reality the Israeli government has imposed on Palestinians, with the support of the U.S., flies in the face of the values Americans claim to uphold. Freedom, justice, and equality for Palestinians is the only way forward.”

Rep. Rashida Tlaib (D-Mich.), whose parents immigrated to the U.S. from occupied Palestine, slammed Trump and Netanyahu for releasing the plan as both are facing re-election campaigns and legal battles.

“It’s fitting that the Trump-Netanyahu plan was released by a forever impeached president on the same day that Netanyahu was indicted for corruption,” Tlaib tweeted. “This political stunt gets us no closer to peace or justice.”

It’s fitting that the @realDonaldTrump–@netanyahu "plan" was released by a forever impeached President on the same day that Netanyahu was indicted for corruption.

This political stunt gets us no closer to peace or justice. As a member of Congress, I consider it a non-starter. https://t.co/PIYYZ75PWc

“This is a political ploy by both leaders to distract from their abuse of power, designed to help Netanyahu win the election in less than six weeks,” Emily Meyer, co-founder of Jewish progressive group If Not Now, said in a statement. “The plan itself is a plan for permanent Israeli military occupation and control, not a plan for peace. It is simply a continuation of Trump’s strategy since entering office: to disenfranchise Palestinians and deny their rights, their agency, and even their identity.”

Rabbi Alissa Wise, a top advocate with Jewish Voice for Peace, a grassroots organization advocating for human rights for Israelis and Palestinians, called it “an apartheid plan”.

“International law, global consensus and decades of US policy concur that Palestinian land isn’t for Trump to give away nor for Netanyahu to steal,” Wise said.

“The only way forward towards lasting peace for Israelis and Palestinians is through justice, freedom, and equality for everyone.”

If Not Now, a progressive anti-occupation Jewish group, circulated a petition to oppose the plan.

“Trump’s entire strategy has been to disenfranchise Palestinians and deny their rights, their agency, and even their identity,” the petition says.

“Zero Palestinians were invited to the White House meeting about the plan or involved in the fake-process that led to this plan.”