The U.S. Corporate government failed to meet a February 16th payments deadline and is now threatening to poison the world’s water supply, MI6 and CIA sources say.  This was how the threat was conveyed by a senior CIA source: “Remember pure clean water is life.  This will become more valuable than gold.”  Translation: “Hand over the gold or we will poison your water.”

As a result of the bankruptcy of the U.S. Corporation, “MOSSAD-IDOD has taken over as the de facto intelligence operative of the U.S.,” MI6 sources say.

“Or in other words…the Rothschild Banking Dynasty-Federal Reserve has called in the loans and simply seized the entire country as collateral,” the sources say.  Pentagon sources confirm this and say that the Trump-U.S. Corporate government is now being run by an Israeli cyber-security outfit in New York. https://www.blacklistednews.com/article/76263/nyc-taxpayers-spending-millions-on-cyber-center-with-controversial-ties-to-israeli.html

The White Dragon Society and its allies will respond to their threats by intensifying efforts to hunt down and kill Khazarian Satanists until they all surrender or die.  Remember, these people have been trying and failing to kill 90% of the world’s population for decades, and they will continue to fail.

The panicking corporate propaganda media is working overtime to spread fear and is now promoting locust swarms as well as pandemics.  This is all part of a failing attempt to maintain control over the people of the world.

Beware of self-described Satanists like Leo Zagami trying to use religion as a cover for mass murder. The problem is we have forensic evidence that proves events like Fukushima and the bioweapon attack on China are being carried out by humans, who are being caught and arrested or killed.  The world is no longer being fooled by their tricks. http://leozagami.com/2020/02/09/the-third-secret-of-fatima-a-new-virus-and-the-chinese-billionaire-censured-by-zero-edge/

For example, this five-minute video is very relevant now as it provides detailed evidence about vaccines, the demonic Bill Gates and his teammates.  We have solid proof that pharmaceutical companies are trying to kill us, and that means we need to defend ourselves by any means possible. https://youtu.be/T3WfRwr4Oyo

Under these circumstances, “Expect the Chinese communist government to attempt retaliation against the Zionist mafia,” CIA sources say adding:

“Watch Israel, more importantly [Israeli Prime Minister Benjamin] Netanyahu. He made an unscheduled stopover in Moscow a few weeks ago to visit Putin. The real reason; Bibi already knows the Chinese will attempt to eliminate him, as they know he is deeply involved in what took place at Wuhan and beyond. He asked for protection from Putin.”

Our FSB sources tell us he did not get it.

What is happening is not the end of the world, but rather the end of the Satanists’ control over the world’s financial system.  There is now, undeniably, a black swan event taking place in the global economy and financial markets.

It is too early to say what the ripple, or should I say tsunami effect of the U.S. default would be. Nonetheless, we can be sure the U.S. Corporation won’t be able to fool the Asians with another Barack Obama house slave like they did in 2008 to end the Lehman crisis.

Furthermore, the economic implosion the world is now going through is already…

causing world trade to seize up.  The Baltic Dry Index, which measures the cost of shipping, is already below the low point it reached after the “Lehman shock.”  Unlike the stock market, this index is based on real ships and cannot be manipulated with central bank funny money like the stock markets. https://tradingeconomics.com/commodity/baltic

Speaking about funny money and the stock markets, the chart below shows how even as U.S.-China trade seizes up, the U.S. stock market keeps rising.  This is part of a planned implosion that will take down both the U.S. and Chinese governments, according to CIA sources. https://www.zerohedge.com/s3/files/inline-images/2020-02-16_14-32-42.png?itok=DnXhfgGP

A senior CIA source in Asia reminded me of what he told me on Dec. 1st regarding China:

“China’s economy and financial system will most likely implode within 2 months.  ‘The Party’ will try to keep it contained as long as possible.  The government cannot sustain the $40+ trillion debt they created.  Some in the know are saying the debt is closer to $50 trillion.  All of it is computer generated unlimited credit.  A lot of it is being used to build massive infrastructure projects, which include numerous empty cities, complete with empty shopping malls.  Three banks have failed in three months.  The government had to step in and take them over.  There are an estimated 500 banks in China that are in serious trouble and expected to collapse according to Chinese banking regulators.  This is around 15% of China’s financial institutions.”

We dismissed this statement at the time because predictions of the Chinese collapse have been failing to come true for decades.  However, it’s now being backed by an article in the Chinese government-linked Global Times saying the country is headed for austerity.  The Chinese know that pumping in money in the face of a freeze in real economic activity is futile.  “In this situation, it won’t be feasible to adopt a proactive fiscal policy,” Chinese Finance Minister Liu Kun wrote.  https://www.globaltimes.cn/content/1179749.shtml

The chart below shows that failing banks are a symptom of a very deep structural problem similar to the one that caused the Soviet Union to collapse.  Increasing levels of investment and debt are leading to increasingly lower, and eventually negative returns.  https://www.zerohedge.com/s3/files/inline-images/cs5.jpg?itok=79_2Av6v

However, as the next chart shows, the entire world is now facing the same problem and it’s ultimately the result of creating money out of thin air and laundering it through greed-motivated, multi-national corporations. https://www.zerohedge.com/s3/files/inline-images/GDP-Economic-Deficit-020519_1.png?itok=IAdT3LRX

In any case, this time the CIA source had the following to add about China:

“This is the end of China as we know it.  This virus was created to destabilize China first and then create global fear and chaos.  Hong Kong will collapse as well.  There is a culling taking place in China now.  We are already in the end game.  And yes, China will get the blame for the collapse of the global economy.”

This kind of outlook is probably why U.S. Secretary of State Mike Pompeo was bragging at last weekend’s Munich security conference by saying, “The West is winning.”  However, the other Western participants at the meeting made it clear they were no longer following the U.S. playbook.

Russia and Britain are cooperating to remove Rothschild control from England, according to MI6 sources.  That’s why Rothschild-controlled U.S. President Donald Trump hung up the phone on UK Prime Minister Boris Johnson who then canceled his planned trip to the U.S., they say.

Chinese Foreign Minister Wang Yi was closer to the consensus when he told the same conference:

“We need to get rid of the division of the East and the West and go beyond the difference between the South and the North, in a bid to build a community with a shared future for mankind.”  http://www.xinhuanet.com/english/2020-02/17/c_138789375.htm

In fact, the British Commonwealth, the Pentagon, the Chinese and the P3 freemasons have been trying to arrange a meeting to come up with a plan for a loose world federation.  They have also agreed to set up a meritocratically staffed future planning agency.

The British and Chinese want a teleconference because they worry (with good reason) their delegates would be poisoned or otherwise killed if they met in person with the P3 people.  As this newsletter went live, the P3 was still reluctant to meet via teleconference.

A P3 source said the Vatican and the Germans are holding out against the meeting.  The source also said German Chancellor Angela Merkel “is with the Hillary [Rockefeller] group.”

This group, apparently, is the one making threats to poison water.  A U.S. military whistleblower had the following to say about their plans:

Zagami, who claims to be senior in the Knights of Malta, did not respond to a query about this statement.

In any case, a reader pointed out the Knights of Malta sign is almost identical to the “umbrella corporation” logo now being associated with the bio-weapons attack on China. 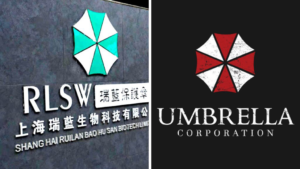 Also, here you can see a Catholic priest blessing small arms being made by the Vatican’s Berretta Arms subsidiary. 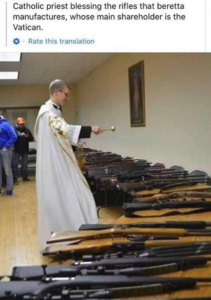 The forensic evidence makes it clear that the battle to liberate planet Earth from Satanic rule now needs to be concentrated against the Vatican’s Satanic faction and their secret bases in Israel, the U.S., and Italy.

Hopefully, the Vatican will agree to a meeting to discuss world peace before their bases are taken out. P3 representatives say they are trying to convince the Vatican.