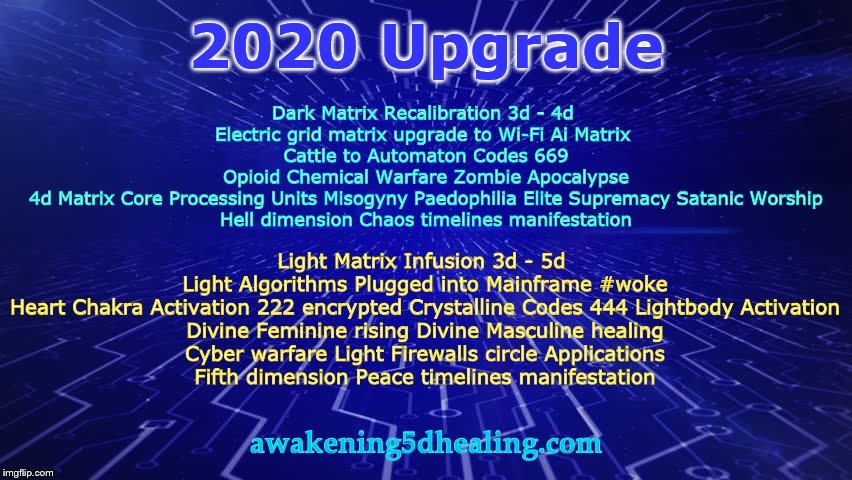 As originally posted on awakening5dhealing.com:

Everything is backwards in the upside down world. The milk of human kindness is what sets us apart from our infiltrators. The higher we raise our internal vibration the more we SEE the world around us. A world engineered in smoke and mirrors, pulsing on the beat of narcism, predator and prey, misogynistic and pedophiliac algorithms. The core processing units of the matrix are misogyny, white élite supremacy and pedophilia. The Devil’s playground indeed. The secrets the cabal hide, propagate and facilitate are organized trafficking, arms and drug/pharmaceutical networks. The dark web, online, is the operating motherboard for black networks of control and deviance. The dark web on the astral is the operational motherboard for the blood magik dark energy wizardry holding the matrix together.

The old 3d matrix was constructed using electricity. Pylons and wires create the 3d matrix grid, cornering communities in wire cages. Electricity is a language, a vibration, a conductor. The 3d gird was implemented as a form of mind control, its mouthpiece our tv and radios. The 4d matrix, the illuminati’s response to Gaia’s transition to the fourth realm, is operating on Wi-Fi, Bluetooth, Tesla’s invisible energy. The parameters of control are transitioning from third realm freemason machinery to fourth realm Ai systems. Our minds are being hooked up to Ai on smart phones to distract and blind us from the Smart World we now live in. The 4d dark Ai takeover has been particularly swift in the West, Apple, Facebook, Google and Amazon, the Four Horsemen of the Apocalypse are indeed here.

Our bodies imbue poisons and toxins of the 3d matrix, chemtrails, consumerism, competition, mk ultra mind control conditioning with fake lighting, people and places. The 4d matrix has compounded the attack on our soul integrity with big pharmaceuticals degrading our motherboards beyond repair in this lifetime. Alkuhul and opioids are powerful astral and chemical weapons used on humanity to control us. In the West its cultural sacrilege not to consume copious amounts of alcohol, ingrained into every generation. When we wake up we SEE corruption of people’s soul blueprint in sustained consumption of alcohol or prolonged use of opiates, cocaine (pressure to partayyyy), anti depressants and painkillers, Prozac Nation anyone?

Astral attachments come with alcohol and cocaine, soul de-tachment is triggered by opioids, chakra system shut down is the effect of barbiturates and anti depressants. All of the above can be fatal for the integrity of our human motherboard. People are dying in their sleep, authorities are covering up the link to their use of prescribed opioids. Dr Jacobi, Twin Peaks, is right, it’s a whole massive cover up ranging from the mortuaries and morgues right up to the shiny corporate offices of big pharma kingpin CEOS. Down to the slimy basement bars of mafioso pimps running the grimier side of things, funded by slick suits, Etonian posh boys groomed to run the world from birth.

The West is crumbling under the epidemic of opioids, no one is talking about it, but it’s there. Opioids detach our spirit from our mindbodysoul trinity being. We get high. We float off into the stars, we dream, we expand beyond our bodies and the matrix. Opium and hallucinogenics gifted from Gaia are supposed to be spiritual enlightenment tools, as indigenous peoples knew and wove into their societies cultures and traditions. The dark arts have inverted their use and instead have created a perfect, silent killing machine within the matrix. There are no shaman, medicine women, Seers and Elders to guide those seeking to travel the astral dimensions, release themselves from the shackles of the material world. Instead people are being prescribed powerful medicines with no safety guidelines, no exit strategy and no spiritual support.

A perfect storm spearheaded by big pharma in the US, prescribed highs, a privatised health care system bouncing people to back to street level illegal highs. A vicious net few can escape from, creating ghost towns of zombies, people hooked up to astral attachments draining them of their life force. Folk are not getting back in time, their bodies stop breathing after de-tachment on the astral for too long a period of time, and noone to tend to their physicals. Drifting off many can’t get back or forget to even try, their bodies shutdown, their souls get swallowed back into the blood magic machine, siphoned, fractured, bruised, damaged, lost. Recycled, less human, more zombie. Just what the 4d matrix wants.

The removal of the core fuel cell, the children, has rendered older versions of the matrix obsolete. Relics scatter the lands, ghost towns, abandoned compounds, castles, islands and cities. Brand, shiny, new corporate palaces echo in lonely, empty silence. The labyrinth has many layers to it. Underground is more active these days than overground. The lizards prefer it. Caves, caverns, tunnel networks, trains and automobiles, the world is smaller and more connected than we realise. From pizza in Portland to hidden hills, Lamborghinis and spirit cooking, its all secret networks built on satanic worship. The illusion of billions of people using up earth’s precious resources is fraying, blistering, cracking under the pressure of lightwaves permeating the biodome. SIMS (Suits in MaskS) maintain the illusion of the old matrix. If people could see what is in front of them they would wake up quickly, dark magic is being used to fog people’s minds, cloud critical thinking and curb curiosity. Compounded in education systems in the west conditioning us to think and behave within very narrow parameters, running on misogynistic racist algorithms. We become cattle, sheep, and now automatons.

People blame others for their misfortune, divide and conquer, hardwired into the motherboard of the 3d matrix and literally holding the 4d matrix together. If we downed our arms and all made up, the 4d Bluetooth shark matrix would collapse. Just like its predecessor it absolutely must have us at loggerheads with each other. We can see this in the UK recent election results, the majority voted for a misogynistic (domestic violence incident two weeks before he was elected?!), racist, Etonian (buffoon anyone?) elitist. Stockholm syndrome at its most powerful when a country, a nation trust their captor over rational rhetoric, we know there’s more going on. Most folk should be able to see the ugliness in the uk parliament, yet they don’t. They don’t see. Beholden to the cabal, beleaguered beyond their own comprehension, clinging to status symbols diluted down from the elite, knock off Chanels, fake Gucci, gold watches and teeth, all the while soaking up the obscenities of the super wealthy lifestyles. We are literally in a zoo. Captive, fed and watered by zookeepers who are using us for our chi, our life force, our blood and our bodies.

The secrets are being uncovered…small world anyone? Valiant YouTubers are putting their lives on the line, undercover warzone Reporters, getting truth out to us. We continue stubbornly to use the world wide web as a source of communication and information. The light matrix is plugged into the Mainframe. We fuel it. We co create it. We are the master controllers, fighting a war for communication and information accessible to the collective. We cannot hide from the net, we cannot block it or ignore it or see it as a threat. We approach it the way we do the physical matrix projected onto our minds. We are cautious, streetwise, canny and sassy. We play the dark matrix at its own game hashtagging light algorithms right back at it. We infuse light into cyberspace, backing up the deep stealth work being done in silicon valleys by brave light soldiers, operating in dark spaces to light up our akashic cloud records. We are working to save humanities memory board, her truths, the worst and best of all that it is to be human in this diabolical vibratory space. Communication lines remain operational only so long as we engage. We are the fuel for the light matrix to fuse with and knock out the dark matrix with light algorithms wiping out dark soundbites. For now our Operatives are fighting on many different dimensional fields to ensure these timelines roll out.

We meet fear, hate and violence with the mentality of soldiers of light. When sacred rage overwhelms us surrender to our angels, there is nothing else we can do. We are hyper vigilant of traps, trip wires and tricks in the old matrix and the new 4d matrix, stealth mode activated. Encrypted coding 222 and 444 are the vibrations of February 2020. Resist, block and dissolve fear in self care, intellectual expansion and peaceful reflection. Inner work is the best remedy for a world that is imploding on itself. The light matrix is plugged in, 2020 upgrades are rolling out. Cyberspace is a warzone for light and dark algorithms, the physical world is transforming with digitalised big brother coding. Our mind body souls systems are upgrading at an exponential rate to align with Gaia’s ascension to the fifth dimension. The war for our hearts, minds and souls just stepped up a gear. We are all players now. In love and light beautiful people.