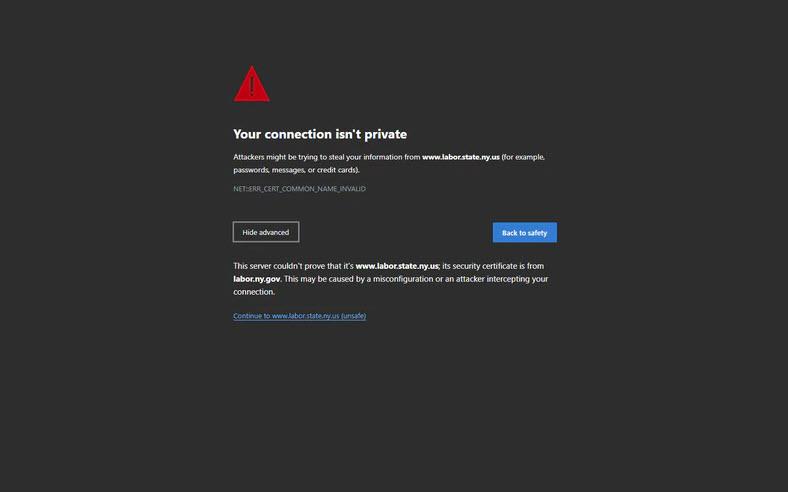 In many ways the US economy is currently in the eye of the coronavirus storm: cities and states are under quarantine lockdown, the CDC has prohibited any groupings of more than 50 people; stores, clubs, restaurants, bars and hotels are voluntarily shuttering indefinitely as the economy grinds to a halt and yet besides a tapestry of ghost cities across the nation, the immediate impact of the devastating viral storm on the service economy has yet to manifest itself.

But the hurricane is about to hit front and center, and the service-industry mecca of New York City is leading the way.

As the Daily News reports, New York’s unemployment website was overwhelmed Monday as the coronavirus pandemic put tens of thousands of people across the state out of work.

The flood of suddenly jobless workers hitting the Department of Labor website with applications for unemployment benefits was unleashed by a drastic move by Gov. Cuomo, who announced all of the state’s restaurants, bars, movie theaters, gyms and casinos would close by 8 p.m. Monday to contain the corona outbreak.

So many people tried to apply that the website crashed several times throughout the day, while the DOL’s hotline was so jammed up that callers seeking aid could not get through to someone who could handle their claim.

The unemployed can apply from 7:30 a.m. to 5 p.m. on weekdays. DOL spokeswoman Deanna Cohen said the department saw a “spike in volume comparable to post 9/11,” adding there are more than 700 staffers assigned to handle the high demand.

Gabe Friedman, a drag queen who performs under the name Kiki Ball-Change

“I’m completely unable to log in and apply” said 26-year-old Gabe Friedman, a drag queen who performs under the name Kiki Ball-Change. “Me and so many other drag queens are completely out of work for at least two months. If I pay rent at the end of April, I would be broke.”

It’s not just the drag queens that find themselves with zero demand for their unique “skills”: tens of thousands of workers across New York’s service industries have already been, or are about to be let go as their employers are forced to either shut down permanently or hibernate until the economy recovers.

The DOL on Sunday waived a seven-day waiting period on unemployment benefits for people out of work due to coronavirus — but that concession proved to be moot as many people could not apply at all.

Rita Lee, 57, who works in the film industry (hopefully not as a drag king), said she started to apply Sunday night after movie productions shut down across the city. She hit a wall once applications opened Monday.

From 11 a.m. to 3 p.m. Lee tried and failed to apply on the website, saying she kept “getting either a system or server error message, or the page will never load.”

“I’ve called all the toll-free numbers, which are recordings that redirect you to a main menu or a message saying that all the operators are overloaded now and to call back,” said Lee. “Can’t reach a human to help.”

David Stollings, a sound engineer at a now-shuttered Broadway theater, called the situation a doozy. “I got the site to load once,” said Stollings. “Before this it was just not loading at all.”

Marnia Halasa, a Manhattan-based figure skating coach, said she was also unable to apply and became worried about paying rent. “What if I have to blow the New York popsicle joint and run back to Ohio to live with my father?,” asked Halasa, who’s lived in the city for 28 years.

While it is not clear how many New Yorkers will lose their jobs due to the pandemic, Empire Center founder E.J. McMahon told the NYDN the hit could be worse than the Great Recession of the late 2000s when roughly 370,000 people lost their jobs in a more than two-year span.

Incidentally, the chief economist of a multi-billion macro hedge fund advised us that they are now modeling approximately 10 million job losses over the next two to three months. We leave it up to readers to decide if that’s too little, too much or just right.