Prepare For Change
Home ARCONTES For A Glimpse Into Your Dystopian Police State Future, Just Visit Your... 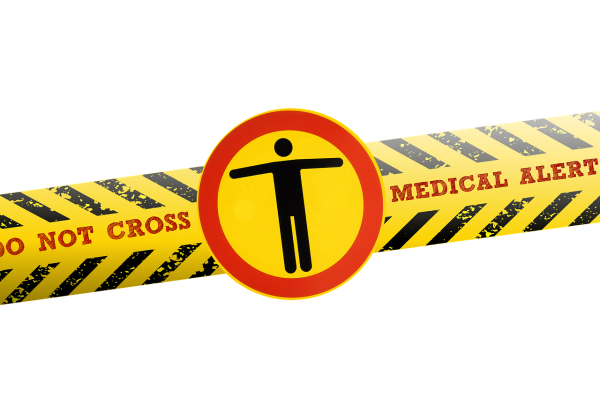 Things are really starting to get crazy out there.  All over the country, “non-essential” businesses have been forced to shut down, but because Walmart sells food and other basic supplies it gets to be one of the “essential” businesses that stays open.  However, a trip to your local Walmart now will be far different from what you remember previously.  When you arrive, you will find that a very narrow entry corridor has been taped off with yellow security tape, and only a very limited number of shoppers are being allowed in at any one time.  And once you get inside, you will discover that there are very strict limits on what you are permitted to purchase.

I know that all of this sounds incredibly bizarre, but it is really happening.  The following is what one of my contacts reported when she visited her local Walmart…

Wow, so we just got back from walmart in Pine Bluff, AR….they herded us in, like cattle…I kid you not….we had to go through a taped-off line and they had only one door open instead of the two they normally have. They have a 5 person limit in Magnolia, AR…..and security guards at the door as well…armed security guards. You can only buy one loaf of bread and the store closed at 7PM…normally open 24 hours. It is CRAZY….someone opened a side door by accident and alarms started going off. I joked to the lady next to me “Oh crap, someone must have taken more than a dozen eggs!”

You can see some video of what these taped off entry corridors looks like right here.  Obviously a lot of the customers are quite concerned about potentially catching the virus because they are wearing masks or other coverings over their mouths.

And it is also being reported that very creepy social distancing instructions are being repeatedly broadcast over the speakers as shoppers circulate through the stores.

Just days ago, Walmart stores all over the nation were operating normally.  But then on Friday, draconian new restrictions were suddenly announced…

Starting Saturday, we will limit the number of customers who can be in a store at once. Stores will now allow no more than five customers for each 1,000 square feet at a given time, roughly 20 percent of a store’s capacity.

To manage this restriction, the associates at a store will mark a queue at a single-entry door (in most cases the Grocery entrance) and direct arriving customers there, where they will be admitted one-by-one and counted. Associates and signage will remind customers of the importance of social distancing while they’re waiting to enter a store – especially before it opens in the morning.

Once a store reaches its capacity, customers will be admitted inside on a “1-out-1-in” basis.

Once shoppers do get inside, they will find that their choices have been significantly narrowed.

In fact, in some Walmart stores entire aisles have been completely sealed off…

Walmart stores in New England are sealing off entire aisles with products deemed “unnecessary” in attempts to combat the scourge of shoppers wandering around to relieve coronavirus quarantine fatigue.

According to CBS Boston, Walmart in addition to Home Depot and BJ’s Wholesale stores in the town of Chicopee, Massachusetts, worked with the city health department to “reduce unnecessary roaming around aisles and putting others at risk.”

Unfortunately, in some stores garden seeds have actually been deemed “non-essential”, and so many that were hoping to grow their own food during this time will be out of luck.

Hopefully once this pandemic is behind us we will see these ridiculous restrictions at Walmart locations go away.

But as we have seen during other moments of crisis in the past, once “emergency measures” get implemented they have a way of sticking around.

And right now many Americans seem to be in the mood to sacrifice their liberties and freedoms for an illusion of safety.  If you can believe it, one recent survey actually found that 67 percent of us actually want restrictions put on interstate travel…

Although America has a reputation for being rather libertarian with regards to personal rights and one’s freedom of movement, a new opinion poll by Rasmussen Reports shows that Americans are turning hardline in the face of the new and deadly Chinese coronavirus. Two out of three want to ban interstate travel and fine those who violate social distancing guidelines.

To be precise, 67% of likely U.S. voters say they want to ban all out-of-state travelers from entering their state — except for emergencies. A mere 21% are opposed, 12% are undecided. As for fining those who break social distancing guidelines: 68% support such a measure, while 20% oppose it and, again, 12% are not sure.

Yes, we should all work together to defeat this virus, but once we lose our most cherished liberties and freedoms they will be exceedingly difficult to get back.

So we should definitely take common sense precautions to prevent the spread of COVID-19, but we must also diligently guard our rights wherever they are threatened.

As this pandemic stretches on, people all over the world are going to be clamoring for a “solution”, and without a doubt the elite will gladly give us one once it is ready.

In fact, it is being reported that Bill Gates is spending billions of dollars building seven different vaccine factories…

Bill Gates is plugging money into building factories for seven promising coronavirus vaccine candidates, even though it will mean wasting billions of dollars.

On Thursday’s episode of “The Daily Show,” the Microsoft billionaire told the host Trevor Noah that his philanthropic organization, the Gates Foundation, could mobilize faster than governments to fight the coronavirus outbreak.

Our society is being transformed at a pace that is absolutely breathtaking, and life as you have known it will never be the same again.

These are perilous times, and things are only going to get stranger from this point forward.

So work hard, pray hard and hold on tight, because the road ahead is going to be really bumpy.