Prepare For Change
Home ARCONTES Satanic Temple head: ‘More than 50% of our membership is LGBTQ’ 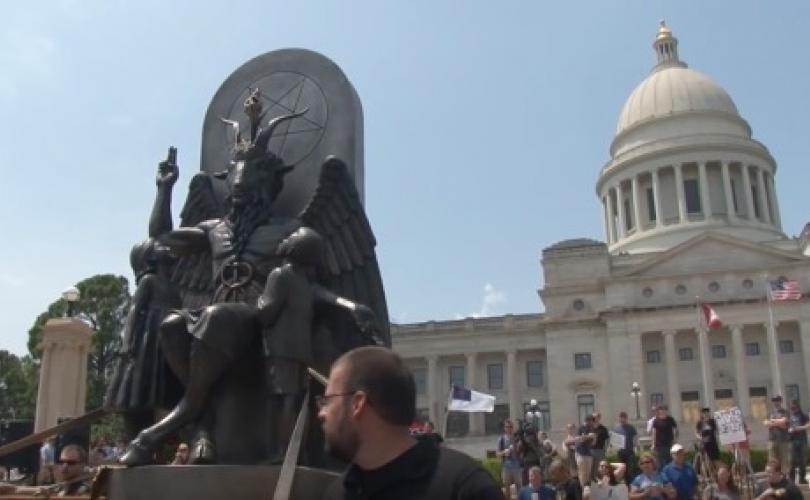 ‘Our chapters are always involved with Pride parades in the United States,’ he said.

“It would be a conservative estimate to say that more than 50 percent of our membership is LGBTQ,” the head of the Satanic Temple said in a recent interview.

Lucien Greaves, who runs the U.S. Satanic Temple, told U.K.-based Attitude magazine, “From the start, when one of our early actions was the Pink Mass, a lot of LGBTQ people were looking for another community that didn’t see them as defined by their sexual orientation.”

It appears Greaves was referring to a ritual he performed at the grave of the mother of the leader of the Westboro Baptist Church, a fringe, vehemently anti-Catholic group condemned by pro-family activists for, among other things, reducing people to the sum of their sexual attractions (just as the LGBT lobby does). The “black mass,” meanwhile, is a blasphemous mockery of the Catholic Mass that includes the desecration of a consecreated host, which the Catholic Church teaches is the literal body, blood, soul, and divinity of Jesus Christ.

“Within the Satanic Temple, we’re all pretty much one and the same,” Greaves continued. “We’re all Satanists and it’s not like we have ‘tolerance’ for trans people or gay people or sex workers, we just don’t f—— care, and a lot of people in those communities appreciate that.”

The Satanic Temple has made a name for itself campaigning against pro-life laws in the name of “religious freedom” and supporting the LGBT lobby.

“Our chapters are always involved with Pride parades in the United States, they’re always doing something for the LGBTQ community and they’re always open about inclusion,” said Greaves.

Other recent activities by the Satanic Temple include erecting a statue next to a Nativity scene in Illinois and bringing a giant statue of Baphomet — a half-man, half-goat creature representing the devil — to the Arkansas state capitol.

The late Vatican chief exorcist Father Gabriele Amorth wrote in his book An Exorcist Explains the Demonic that satanic influence can “lead to confusion about one’s gender,” “particularly in the young.”

“The most frequent weak points in man are, from time to time, always the same: pride, money, and lust,” he wrote.

Satanists don’t promote ‘a belief in a personal Satan’?

A Pink News article on Greaves’s comments to Attitude reported, “A commitment to Satan is not required to join the Temple, although a commitment to trolling anti-LGBT evangelicals is desirable. The group’s website clarifies that members do not actually ‘believe in the existence of Satan or the supernatural.’”

“It explains: ‘As such, we do not promote a belief in a personal Satan. To embrace the name Satan is to embrace rational inquiry removed from supernaturalism and archaic tradition-based superstitions. Satanists should actively work to hone critical thinking and exercise reasonable agnosticism in all things.’”

That sentiment is similar to what the Satanic Temple in Canada’s national coordinator said before hosting the country’s first satanic “black mass.”

They are “atheistic Satanists” who don’t believe in “supernaturalism” but “look to science as our arbiter, Nicholas Marc of the Satanic Temple in Canada said.

Fr. Amorth also addressed this in his book, writing:

Generally one distinguishes [between] a personal Satanism (or occultism) and an impersonal or rationalist Satanism. The first recognizes the personal nature of Satan, and the followers entreat, adore, and honor him as a god. The second, the impersonal or rationalist, does not believe in Satan’s personal nature, that is, in the metaphysical sense; rather, they see him as a cosmic energy that is present in each man and in the world and that, when called upon, will emerge in all of his power to carry out the most absurd and atrocious perversions, always connecting them to esoteric rites.

What is their objective? Satanists wish to develop this depraved form of devotion through a diffusion of the theory and practice of three basic principles: you can do all that you wish, no one has the right to command you, and you are the god of yourself. …

In appearance these principles are seductive, especially for younger people, because they delude them into thinking that life is a beautiful holiday in an imaginary land of playthings, where everything is permitted and where your ‘I’ does not recognize any limits regarding pleasure and enjoyment.

“My question is, if it’s just a myth, why are you reenacting all this? Why are you doing it?” he said of the Canadian black mass.

And because Satan exists, “in that sense it doesn’t matter if they actually believe if he’s real or not; if they do the particular ritual which will actually invoke him, he will possibly, God permitting, show up, or it will have an effect on the spiritual level independent” of what the Satanists believe, he said.

Witchcraft has been on the rise in recent years, with feminists turning to it as a form of anti-Trump protest. A movement encouraging people to “hex” the president has emerged.

“The number of witches and Americans practicing Wicca religious rituals increased dramatically since the 1990s, with several recent studies indicating there may be at least 1.5 million witches across the country,” Newsweek reported in November 2018. “A Trinity College study conducted in 1990 estimated only about 8,000 Wiccans in the U.S., but the increase has been led by a rejection of mainstream Christianity among young Americans as well as a rise in occultism. With 1.5 million potential practicing witches across the U.S., witchcraft has more followers than the 1.4 million mainline members of the Presbyterian church.”