The battle for Planet Earth is entering a dangerous phase as at least three factions desperately fight for domination. This onslaught is now showing not only biblical but even otherworldly dimensions. The biblical aspect includes the occupation of the main holy sites of Islam by unknown forces. The otherworldly aspect includes an attack on area 51 and a downed UFO in Brazil. All this is happening while the Covid-19 scamdemic is being fought over by factions who just want to control humanity versus factions that want to kill most of us off.

Let us start with the otherworldly part of this battle. Here the U.S. government started openly recruiting staff for off-world work. The ad can be seen here: https://www.youtube.com/watch?time_continue=1&v=9ud7wgbBBnY&feature=emb_logo

The release of this recruitment advert was followed by the murder of Air Force Col. Thomas Falzarano, who commanded the service’s 21st Space Wing. https://www.stripes.com/news/air-force/air-force-space-wing-commander-dies-at-peterson-air-force-base-1.629647

Then immediately afterward, there was a huge attack on the infamous Area 51 “UFO base.” The seismograph of the 6.5 magnitude quake that hit the base shows a sudden massive explosion, not a natural earthquake. 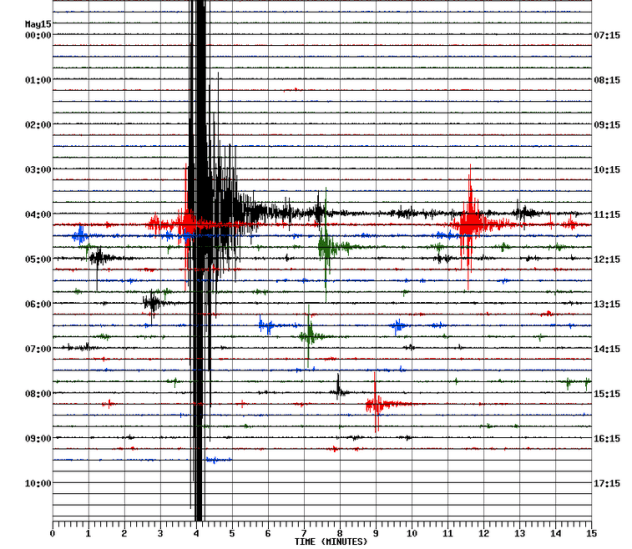 Pentagon sources say “the hospital ship USNS Mercy left Los Angeles on May 15th as Nevada and Croatia were hit with quakes.” They say the ship was filled with arrested Satanists and hinted that they destroyed underground bases at both locations after children were rescued from underground adrenochrome manufacturing facilities.

The quakes were followed by a very unusual UFO sighting in Brazil followed by a crash of a UFO that was filmed by many people. A two-minute video showing the UFOs and the crash site can be seen here: https://www.youtube.com/watch?v=pL9W7ME6elg

The U.S. Naval Intelligence linked site Sorcha Faal, for its part, claims the U.S. retaliated for the murder of Colonel Falzano by killing the Chinese Ambassador to Israel Du Wei. So why would the Navy think the Chinese orchestrated the murder of a space force commander?

It’s not clear, but several years ago a member of the Rothschild family introduced me to a representative of the Dragon family saying, “If you want to talk to China, this is as high as it goes.” The Dragon family representative told me the Chinese had off-world sponsors who threatened to put humanity under “very strict control” if they did not “get their act together.”

There are a lot of question marks surrounding these events but clearly something highly unusual is going on.

Now let us look at the Biblical part. Pentagon sources, in their version, say the Chinese Ambassador to Israel was killed because a Chinese Zionist faction was…

financially supporting Israeli efforts to annex more Palestinian land and build the third temple, thus triggering an end-times event. “The death of the ambassador may also cause China to stop investments in Israel while galvanizing even more international punitive actions against annexation,” the sources say.

“Jordan is so upset with the annexation that the King himself warned of a ‘massive conflict’ and may not just cancel the 1994 peace agreement but also the $10B gas deal with Israel,” they continue. In a warning to Israel they said:

“Egypt has powerful Russian radars that cover all of Israel from the South to complement Syrian radars from the North.”

The sources further noted that “The International Criminal Court has a stronger case against Israel with the Arab League declaring the annexation as a ‘new war crime’.”

Without U.S. backing and with Egypt, Jordan, Turkey, Syria, Iraq, and Iran poised against it, Israel is facing an existential crisis. That’s why they formed a unified government now under the control of Satanist Benjamin Netanyahu. Upon taking power yet again Netanyahu said:

“We must never forget that we must rely on ourselves, for our security, the cornerstone of which is the IDF and security forces.” In other words “we are on our own now.”

It looks like the Israelis are also trying to invoke Moses by making a river there run red. https://www.thesun.co.uk/news/11637903/israel-river-red-blood-like-biblical-plague-egypt/

The Israeli’s Satanic pseudo-Muslim allies in Saudi Arabia are also under extreme threat. Not only have they lost allies like the UAE and Qatar, but they are also now under attack from Yemen.

The cities of Riyadh, Mecca, and Medina have been under 24-hour curfew and shut off from the rest of the world since April 2nd. There are also reports that 70% of the population has been infected with the “coronavirus.” https://www.middleeasteye.net/news/coronavirus-saudi-arabia-mecca-most-population-infected

This could be a sign that the entire population is being culled. Some of the P3 Freemasons have an extremely deep hatred of Islam. That’s because they have waged a Holy War for over a thousand years against them. They also blame Islam for most of the world’s problems. Therefore, it’s entirely possible some sort reckoning is now taking place there.

Remember the “coronavirus” has been used as a cover for mass murder in Wuhan, China, and for the culling of Satanists inside the U.S.

Recall how last we noted the President of Tanzania sent various samples of food, animals, and materials disguised with human identities to the W.H.O. for coronavirus testing and most came back positive?

There is plenty of evidence now coming out that this so-called pandemic was planned long in advance. The EU, for example, came out in 2012 with a pandemic comic book intended only for senior staff. The plot reads almost identically to what is going on now. Towards the end it read:

“The fear thus created can be put to good use” triggering a “global response…under the guidance of international technical organizations.”

The elite have made many practice runs for this current “plandemic.” Here is what the World Bank had to say in 2017:

“The World Bank Group is working with the Bill and Melinda Gates Foundation, to conduct the first set of pandemic simulation exercises that are designed to recreate a disease outbreak scenario to provoke a robust discussion about pandemic preparedness among policymakers. President Jim Yong Kim, Bill Gates and Chancellor Angela Merkel of Germany will jointly host simulation exercises on pandemic preparedness for the Heads of State and private sector leaders during the next World Economic Forum in Davos in January 2017 and the G-20 Heads of State meeting in July 2017. https://blogs.worldbank.org/health/pandemic-simulations-preparing-catastrophe-we-hope-will-never-happen

The Chinese appear to be on board with the official Xinhua news site saying:

“Given the colossal hit on real economies and the highly interrelated global financial system, saving a globalized economy this time requires even stronger global collaboration.” http://www.xinhuanet.com/english/2020-05/18/c_139065941.htm

The EU comic book ends with an Asian and a European falling in love and kissing, implying that East and West are being united. The Chinese certainly support such a scenario.

The problem is that there is a faction using this misguided, if well-intentioned, exercise for much more sinister purposes.

“The obstacles [to starting the new financial system] are the acts of war and high treason as the WHO attempted to foist this hybrid total population control system by way of an induced global sickness. Ordo ab Chao type stuff.”

We appear to have at least three groups trying to use this plandemic to promote their own agendas.

1) The moderates who want a friendly planet where all countries work together to solve problems we all face i.e. a loose world government.

2) The control freaks who want to microchip us all and keep us under strict, centralized control. They are the ones calling for “social distancing” because their microchip control systems don’t work if people are too close together.

3) Finally, we have the radical messianic Zionists who still think we need to kill 90% of the world’s population and enslave the rest. These are the ones trying to kill us with 5G electromagnetic weapons, poisonous medicine, etc.

There is also a fourth group of isolationists under U.S. President Donald Trump that appears to want none of the above but have America go it alone.

This group is, in its own way, doing a lot to liberate the Republic of the United States from the Satanic owners of the U.S. Corporate government.

For example, it looks like they are about to free prison slave laborers. Last week Trump passed an executive order against forced labor. https://www.whitehouse.gov/presidential-actions/eo-establishment-forced-labor-enforcement-task-force-section-741-united-states-mexico-canada-agreement-implementation-act/

The key point of this order is Section 307 of the Tariff Act of 1930 (19 U.S.C. § 1307). This “prohibits the importation of merchandise mined, produced or manufactured, wholly or in part, in any foreign country by forced or indentured child labor – including forced child labor.”

Of course, it may just be an excuse not to buy things from China. However, prison slave laborers are being freed across the U.S. now. https://www.washingtontimes.com/news/2020/may/17/gavin-newsom-california-governor-eyes-prison-closu/

The nationalization of the Federal Reserve Board inside the U.S. is also starting to benefit average Americans. For example, two-thirds of Americans left unemployed by this pandemic exercise are now getting more money than when they were working. Also, the U.S. is finally rebuilding its long-neglected infrastructure. https://www.redstate.com/alexparker/2020/05/15/coronavirus-two-thirds-americans-making-more-unemployment-economic-stimulus-cares-act/

The gnostic Illuminati controlled U.S. is also winning its battle against bloodline rule there. The bloodline families are now being forced to fight against Trump using a virtual Obama. https://www.dailymail.co.uk/news/article-8328345/Donald-Trump-asserts-shutdowns-deadly-people-leave-house.html

There is also a lot of corruption being rooted out as can be seen from this Trump tweet:

“Joe Biden’s deadbeat son Hunter inked a $1.5 BILLION deal with China while Joe was Vice President. What did the Biden’s offer China in return? Obama was the most corrupt President in U.S. history.”

Also, former CIA and Marine intelligence officer Robert David Steele notes that “the certainty that NSA has every email, every text, every cell call, every game chat ever made by naked short selling and money laundering criminals on Wall Street — could yield a $100 trillion bonanza for President Donald J. Trump, who up to this point has been fooled into thinking that $15 trillion was the best he could get. Learn more at https://stopnakedshortselling.org”

It’s worth noting that foreigners dumped a record $300 billion in U.S. debt in March. https://www.zerohedge.com/geopolitical/foreigners-dumped-record-amount-us-treasuries-amid-march-liqudity-crisis

Therefore, with U.S. industrial production dropping the most in 100 years and now operating at only 65% capacity due to a lack of imported parts, the Trump regime will have no choice but to make a deal with the moderate faction of the globalists. https://www.zerohedge.com/markets/us-industrial-production-plunges-most-over-100-years

We would like to conclude this week with some good news. It appears the tide has been turned on the human-caused mass extinction event. The positive signs in nature are many. For example, clearer skies are being noted around the world and the Himalayas can once again be clearly seen in India, humpback whale populations are back at levels not seen since before whaling started, Hainan gibbons are back from the brink of extinction and the first wild stork in hundreds of years was born in the UK.