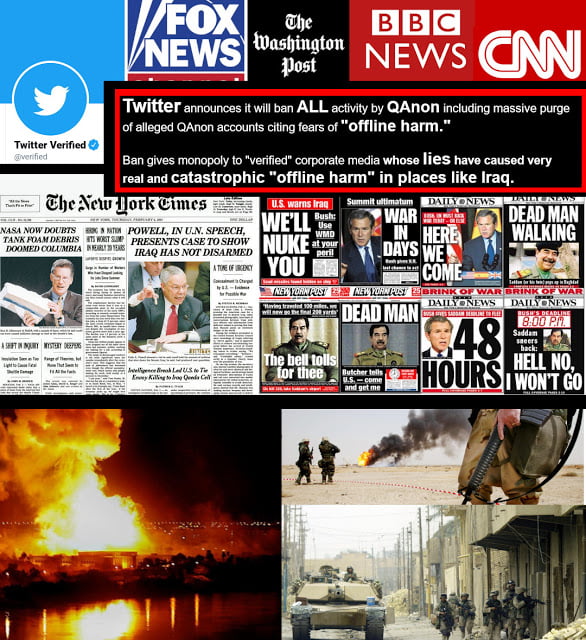 July 22, 2020 (Tony Cartalucci – LD) – News outlets like CNN reported on Twitter’s move to purge the QAnon movement from its platform.

There is no doubt that QAnon has been behind absurd conspiracy theories and verified lies circulating online – suspiciously absurd. Banning it from Twitter because of alleged fears its activity will lead to “offline harm” is even more absurd .
Despite making absurd claims that demonstrably never materialize or providing evidence that is later revealed to be clearly fabricated, nothing QAnon has done differs from what the corporate media does on a daily basis. In many ways they are one in the same – dividing and distracting the public while US special interests advance their agenda unnoticed and unopposed.
QAnon allegedly made false claims that Hillary Clinton’s arrest was imminent – she was never arrested. Conversely, the corporate media regularly claims that various world leaders in nations targeted by Western regime change have “fled,” are “dead,” or otherwise “ousted from power” – with lies spread by the Western media over the alleged “fates” of still incumbent leaders like Syrian President Bashar Al-Assad, Venezuela’s President Nicolás Maduro, and North Korean leader Kim Jong-un coming to immediate mind.

Collectively these conflicts have killed over a million people and driven millions more from their homes. This “offline harm” – the direct result of lies told by the Western corporate media – has not only gone completely unaddressed by Twitter – it is enabled by Twitter.
Twitter – along with other US tech giants like Facebook and Google – aided the US government in sowing chaos across North Africa and the Middle East in 2011, precipitating wars that are still raging today, claiming lives, and effecting “offline harm” impacting millions of people.
The banning of the more absurd QAnon movement will pave the way for other purges – eventually eliminating any alternative to the corporate media and its demonstrably dangerous and dishonest narratives. QAnon’s absurdity will make it easy for Twitter to justify its ban, but the momentum toward greater censorship across Western social media will eventually impact accounts and movements previously difficult to justify banning.
US-based “social media” platforms – Twitter, Facebook, YouTube, etc. – are no longer truly social media. They are clearly transforming into centralized programed media where corporate monopolies create content that is consumed, removing the public, independent organizations, and competitors’ role in creating content, contributing to discussions, offering alternative views, and interacting with one another.
It is important that this fact be fully recognized and exposed as well as the creation of alternative platforms – especially overseas where US-based “social media” has been fully weaponized and used to undermine sociopolitical and economic stability.
Source: https://landdestroyer.blogspot.com

“One Of The Worst Downturns In Recent History”: Zuck Warns Facebook Employees To Brace For Layoffs