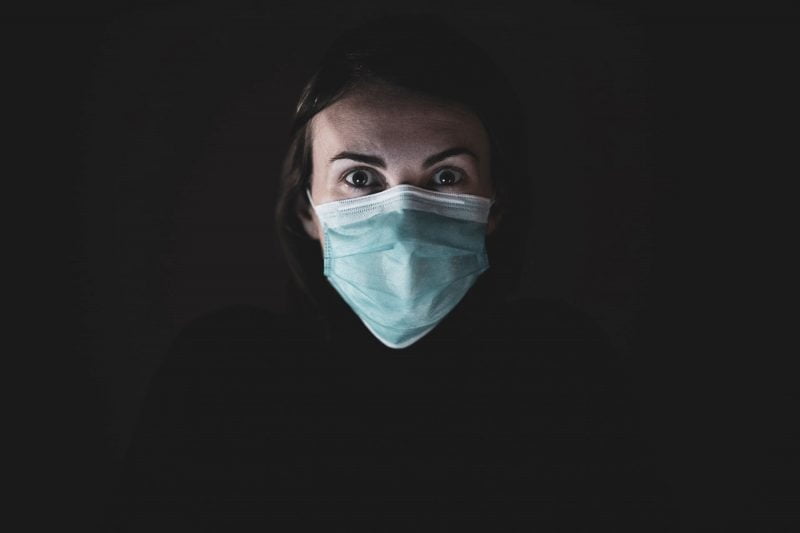 Whether masks actually prevent the spread of respiratory infection remains a subject of debate. As recently as March, the US Surgeon General was saying face coverings could actually increase one’s risk of infection.

by Jon Miltimore from HumansAreFree.com:

There’s a famous scene in the movie Fight Club where Tyler Durden is on an airplane thumbing through one of those safety manuals in emergency exit rows.

It’s a memorable scene because it touches on the strange things humans do to make ourselves feel secure in frightening situations. Which brings me to America’s latest fad: wearing masks in public.

Polls show that more than half of Americans are now choosing to wear masks when they go out, presumably to prevent catching or spreading the COVID-19 virus. What one chooses to wear is up to them, of course, but the trend is a bit surprising considering government officials spent months telling Americans not to wear protective face coverings.

“We don’t routinely recommend the use of face masks by the public to prevent respiratory illness,” Dr. Nancy Messonnier, director of the Center for the National Center for Immunization and Respiratory Diseases said on January 31. “And we certainly are not recommending that at this time for this new virus.”

Throughout February and into March, similar statements were made by numerous other top government officials and agencies.

Health and Human Services Secretary Alex Azar said “the average American does not need a N95 mask. These are really more for health care providers.”

He was echoed by Robert Redfield, Director of the Centers for Disease Control and Prevention, who told the House Foreign Affairs Committee that there “is no role for these masks in the community.” In February, the US Surgeon General chimed in on Twitter, “STOP BUYING MASKS.”

Despite these warnings, the popularity of masks grew. “Maskies” — selfies of people wearing masks — are the latest trend on Instagram, Fast Company reports. They’ve become a symbol and form of expression, a way to show social solidarity and empowerment.

“When everyone is wearing masks, I feel respected,” one woman recently told National Geographic. “The message is: I’m protecting you, you’re protecting me, I can feel safe.”

Feel safe. That’s the key word. Whether masks actually prevent the spread of respiratory infection remains a subject of debate.

There’s a reason public officials made the statements above.

An abundance of research shows masks offer little or no protection against infection from respiratory viruses, and some masks can actually increase one’s risk of infection.

A 2009 randomized clinical trial found that surgical masks offered no protection at all. A 2015 study concluded rates of infection were especially high in cloth masks, finding particle penetration in nearly 97 percent of them.

As recently as April 7, a paper analyzing data from 15 randomized trials concluded that “compared to no masks there was no reduction of influenza-like illness cases for influenza for masks in the general population, nor in healthcare workers.”

Despite the lack of hard empirical evidence, however, the study recommended the use of masks based on “observational evidence from the previous SARS epidemic.” [Editor’s Note: The authors also found that most clinical trials had “poor design,” thus there was insufficient evidence to provide recommendations.]

Perhaps similar reasoning guided the CDC’s about-face in April when it issued guidance recommending the use of cloth face coverings for healthy individuals (though the World Health Organization still advises against them).

Recommended is the key word here. We’re now in May, a mere two months after federal authorities were imploring Americans to not wear or buy masks, and many people are finding themselves forced to wear masks to do their shopping or even go for a walk.

The latest state to join the bandwagon is Massachusetts. The new order requires anyone over the age of two to wear a mask or face covering in public places, even if they are outdoors.

In the span of just two months, we’ve gone from urging people to not buy or wear masks (and warning face coverings could increase the risk of infection) to threatening to fine and jail those who don’t wear them. Americans, understandably, are confused. And it’s not helping.

This week in Michigan, a Family Dollar security guard was killed after refusing to allow a woman’s daughter into the store because she wasn’t wearing a mask. The guard was enforcing an executive order Gov. Gretchen Whitmer signed two weeks earlier.

While only those people directly involved in the guard’s death are responsible, such confrontations could be avoided if state governors exercised a little humility and acknowledged that CDC recommendations are not gospel and the department’s conclusions (clearly) are not infallible.

Good ideas generally don’t require force. And the truth is, based on an abundance of medical research and the federal government’s own statements and reports, it’s unclear how effective masks are as a preventive measure against COVID-19 transmission.

Public health aside, there’s no disputing the psychological impact masks have.

“The coronavirus is coming, and we feel rather helpless,” Dr. William Schaffner, Professor of Preventive Medicine at Vanderbilt University, told CNN in March. “By getting masks and wearing them, we move the locus of control somewhat to ourselves.”

In a sense, the mask craze is largely about managing our fears. As my colleague Sean Malone recently observed, when people are afraid they’re much more willing to accept anything they believe might make them a little safer. Even really bad policies and ideas.

The illusion of safety. It’s a powerful thing. For both humans and governments, it would seem.