Prepare For Change
Home ARCONTES Satanic Temple is Giving Away a Free Abortion, Turning Child-Killing Into a... 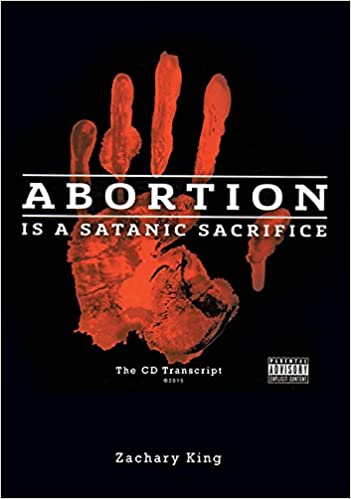 The Satanic Temple (TST) is holding a fundraiser to advance their pro-abortion agenda. The organization believes any protective laws for the unborn baby or her mother “unlawfully hinder access to the Satanic abortion ritual.”

They hope to raise $100,000 toward this cause. And you’ll never guess what the Grand Prize winner receives—or maybe you will.

Those who give at least a $200 donation will be entered to win a drawing for a free abortion. TST will pay medical expenses up to $2,500, which indicates they’re looking to fund a late-term abortion which are more costly.

Those who donate $100 or more will be eligible for a drawing of a second-place prize, a Zoom meet-and-greet with TST founder, Lucien Greaves, and no, I don’t know if that’s his real name.

Third place winners who give at least $75 might receive a signed Baphomet sketch by Mr. Greaves himself. No word on how much, if any, money has been raised.

TST claims to prioritize science as a prevailing guide of their beliefs and actions. The Fifth Tenet states, “Beliefs should conform to one’s best scientific understanding of the world. One should take care never to distort scientific facts to fit one’s beliefs.”

But then they claim a woman’s autonomy supports abortion and they chose to ignore the indisputable science that the unborn child is a unique individual with her own DNA and autonomy.

Their premise is that any and all abortion protections hinder TST’s right to religious expression that includes the Satanic abortion ritual.

The Satanic abortion ritual is supposed to provide “spiritual comfort.” Tell that to the millions of mothers who experienced a void of anything remotely connected with spiritual comfort. That is, until they found the redeeming blood of Christ.

The Satanic abortion rituals consist of the mother reciting in front of a mirror, two of seven tenets and an affirmation, punctuated by the death of her unborn child.

This is little more than a thinly veiled attempt to eliminate all abortion protections in the name of Satan. In their online Q and A section, they admit to not even believing in Satan or that he is real. “Do you worship Satan?  No, nor do we believe in the existence of Satan or the supernatural.” They consider themselves “Atheistic Satanists.” While TST expresses it in a more artful way, they’re using Satan as a front to keep abortion legal.

This does not mean that we should ignore them. The group boasts 23 chapters around the nation and received a favorable ruling by the Western District of the Missouri Court of Appeals. A federal appeals court threw out their lawsuit on a technicality.

These people are smug in the idea that they’ve come up with a novel legal strategy to keep abortion on demand the law of the land. But if they hold to those beliefs, when their time on earth comes to an end, they will be surprised to face the realization that Satan does exist and is very real—real enough to torment them for an eternity.