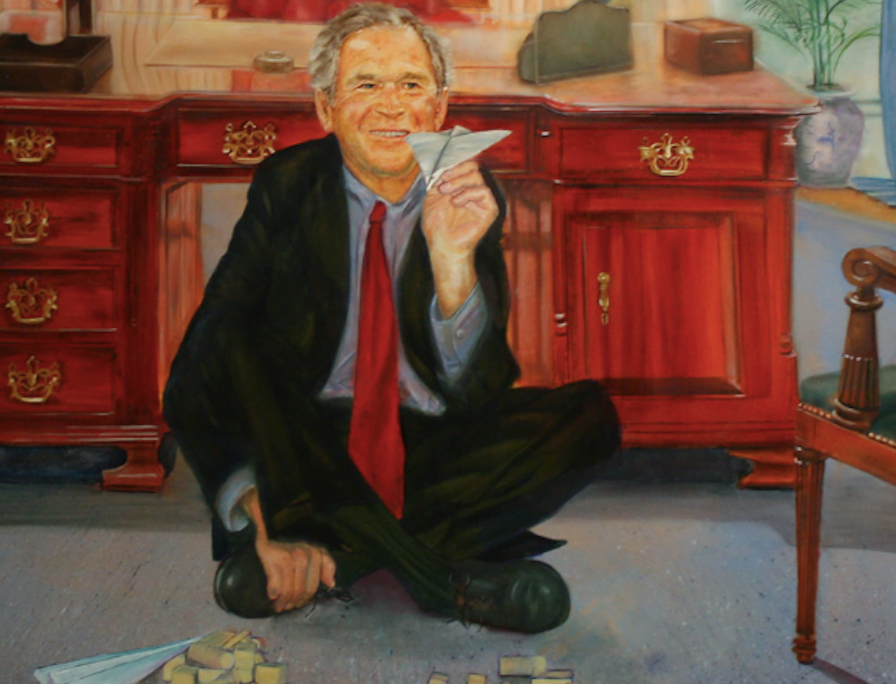 What Happened: Jeffrey Epstein, the convicted pedophile who ‘killed himself’ and had close connections to many powerful people, also had some peculiar paintings in his home, as discovered after his death. Many were sexual in nature but not all of them. A couple of the paintings were by artist Ryan-Kleid. Apparently, Kleid had no idea that Epstein’s home was where these paintings ended up. One of the paintings inside Epstein’s home was of Bill Clinton wearing a blue dress, sitting seductively in a chair, crossing his legs and pointing a finger to the person looking at the picture. Another one was of George W. Bush, called “War Games” which features the former president sitting on the floor of the White House playing with paper airplanes in front of two fallen Jenga towers, obviously implying his manipulation of the 9/11 attacks which were used to justify the invasion of Iraq for ulterior motives. Who knows what the Clinton painting is supposed to imply, I’ll let you be the judge.

Parsing Bill and War Games were shown at the 2012 Tribeca Ball, a fundraiser for Ryan-Kleid’s alma mater, the New York Academy of Art. Photos from A Guest of a Guest, a party blog, show the artist posing in front of the two works at the star-studded event.

Earlier today, Ryan-Kleid said in a statement to artnet News that she had no idea where the painting had ended up until she saw it light up the news yesterday:

In 2012, as a grad student at the New York Academy of Art, I painted pictures of Presidents Bill Clinton and Bush as part of my Master’s thesis. When the school put on a fundraiser at the Tribeca Ball that year, they sold my painting to one of the attendees. I had no idea who the buyer was at the time. As with most of my paintings, I had completely lost track of this piece when it was sold seven years ago. So it was a complete surprise to me to learn yesterday that it wound up in Epstein’s home. (source)

Why This Is Important: 9/11 is a classic example of what’s happened on our planet time and time again for over one hundred years. I am referring to ‘false flag‘ events that are created by the same ‘powers that be’ who then in-turn use these events to justify actions that they desire to take. In this case, the invasion of Iraq after 9/11. Some still believe this is a conspiracy theory, but leaked documents, examination from physicists and engineers, whistle-blower testimony from high ranking individuals, the connections, creation, arming and funding of various terrorist groups like ISIS and Al-Qaeda to and by western governments, and much more make it quite clear for others.

That being said, a massive amount of propaganda was created after this event, and patriotism was used to glorify military heroes. These were soldiers not knowing what they were being sent to do. They themselves believed they were actually protecting their country, when in reality the invasion of Iraq and the entire Middle East over the years had absolutely nothing to do with that.

The global elite have always captured the minds and the hearts of the masses. This is how their actions are able to move forward, under the guise of good will. It’s not just with the “war on terror” but with many other subjects as well.

A great quote by Edward Bernays, who was known as the father of public relations, comes to mind here:

The conscious and intelligent manipulation of the organized habits and opinions of the masses is an important element in democratic society. Those who manipulate this unseen mechanism of society constitute an invisible government which is the true ruling power of our country. We are governed, our minds are molded, our tastes formed, our ideas suggested, largely by men we have never heard of. (source)

Another great one from Mark Twain:

The statesmen will invent cheap lies, putting the blame upon the nation that is attacked, and every man will be glad of those conscience-soothing falsities, and will diligently study them, and refuse to examine any refutations of them; and thus he will by and by convince himself that the war is just, and will thank God for the better sleep he enjoys after this process of grotesque self-deception. – Via his work, The Mysterious Stranger

The important thing to recognize is that like 9/11, Pearl Harbour, Vietnam, the chemical gas attacks in Syria and many more examples all carry with them one common theme, and that’s and the manipulation of human consciousness. Our consciousness is manipulated so much by powerful people, and mainstream media is their main tool. 9/11 was one of the best examples of this, but it also served as a strong catalyst that ‘woke up’ millions of people to facts about our world that were, and still are hard for many to acknowledge.

The lack of empathy, morals, benevolence and ethics this small group of global powerful individuals would have to have to pull something like 9/11 off, or to drop an atomic bomb etc is quite telling, and perhaps that’s why it’s so hard to believe. What type of human being would do something like this?

To read our articles on the 9/11 subject, click here. Another great place to dive deep into the subject if you haven’t already looked into it is Architects & Engineers for 9/11 Truth.

It’s the same thing with elite level pedophilia, in order to engage in sex trafficking, abuse and the murder of innocent children one has to lack empathy, ethics and morals as well. They also have to have been hurt or have suffered some type of extreme physical or mental trauma themselves growing up. Is our world simply a reflection of the ‘leaders’ we continue to give our power away to? We do this by voting every four years. Is it really a surprise that our leaders would be engaging in and orchestrating such events like 9/11 when they are engaged in child sex trafficking and ritual abuse? Who is controlling them?

What about Jeffrey Epstein, who was he really? A few things not covered by Netflix or the mainstream media is that fact that there is reason to believe that Epstein’s his job was actually to entice powerful people within politics to have sex with young women and then ultimately entrap them, whether it’s with photographs or hidden cameras or through other methods. For example, in an interview with Zev Shalev, former CBS News executive producer and award-winning investigative journalist for Narativ, the former senior executive for Israel’s Directorate of Military Intelligence, Ari Ben-Menashe, claimed not only to have met Jeffrey Epstein and his alleged madame Ghislaine Maxwell, back in the 1980s, but that both Epstein and Maxwell were already working with Israeli intelligence during that time period.

Maxwell has been arrested and charged with conspiracy to persuade minors to travel and engage in sex acts as well as enticing and transporting a minor to travel to engage in illegal sex acts. These aren’t the only two examples of sexual abuse and sex trafficking among elite people, there are many examples from the Royal Family, the Vatican, Hollywood, in the world of big finance and more. It’s a big issue that never seems to get the serious attention it deserves.

A Deeper Look: Our Interview With A Survivor of Elite Level Child Sex Trafficking

If you watch our interview with Lucas, you will see how there is a very expansive and uplifting message that comes out of all of this, despite the disheartening subject matter. Human trafficking and child abuse represent the most untold stories of our generation, as they affect hundreds of thousands, if not millions of people every year, many of them children. We are slowly coming to terms with the fact that this happens at elite levels, done by some of the most ‘prominent’ and powerful people. It’s time to talk about it, and it’s time to ask more questions. Let’s keep disclosure coming and continue to ask ourselves why were hand over our thoughts and power to people who are lacking morality, empathy, and have no desire to see the human race thrive.

You can also watch a recent documentary called Out of Shadows that explores this topic in detail on CETV as well.

Below is a a little clip from our interview with Anneke, conducted by one of our former Journalists.

When coming across information like this, it’s quite common to feel helpless and hopeless, but one should take comfort in the fact that just ten years ago this topic was virtually off the radar, nobody knew about it at all, and just look at what’s happened today. The topic is getting much more attention, and elite level child trafficking and ritual abuse is one of many examples of a “conspiracy theories” becoming fact.

Take comfort in knowing that human consciousness alone is a big factor when it comes to shaping our reality and the human experience. The simply act of becoming more aware leads to the path of manifesting change, however this takes time and as human consciousness continues to shift, we as a collective also manifest the necessary actions steps to combat this problem. This is what we are currently going through right now.

I know that keeping quiet is definitely not an option, and how we react and respond to facts about our human experience is super experience. We can’t create a new human experience from the same level of consciousness we created it from.