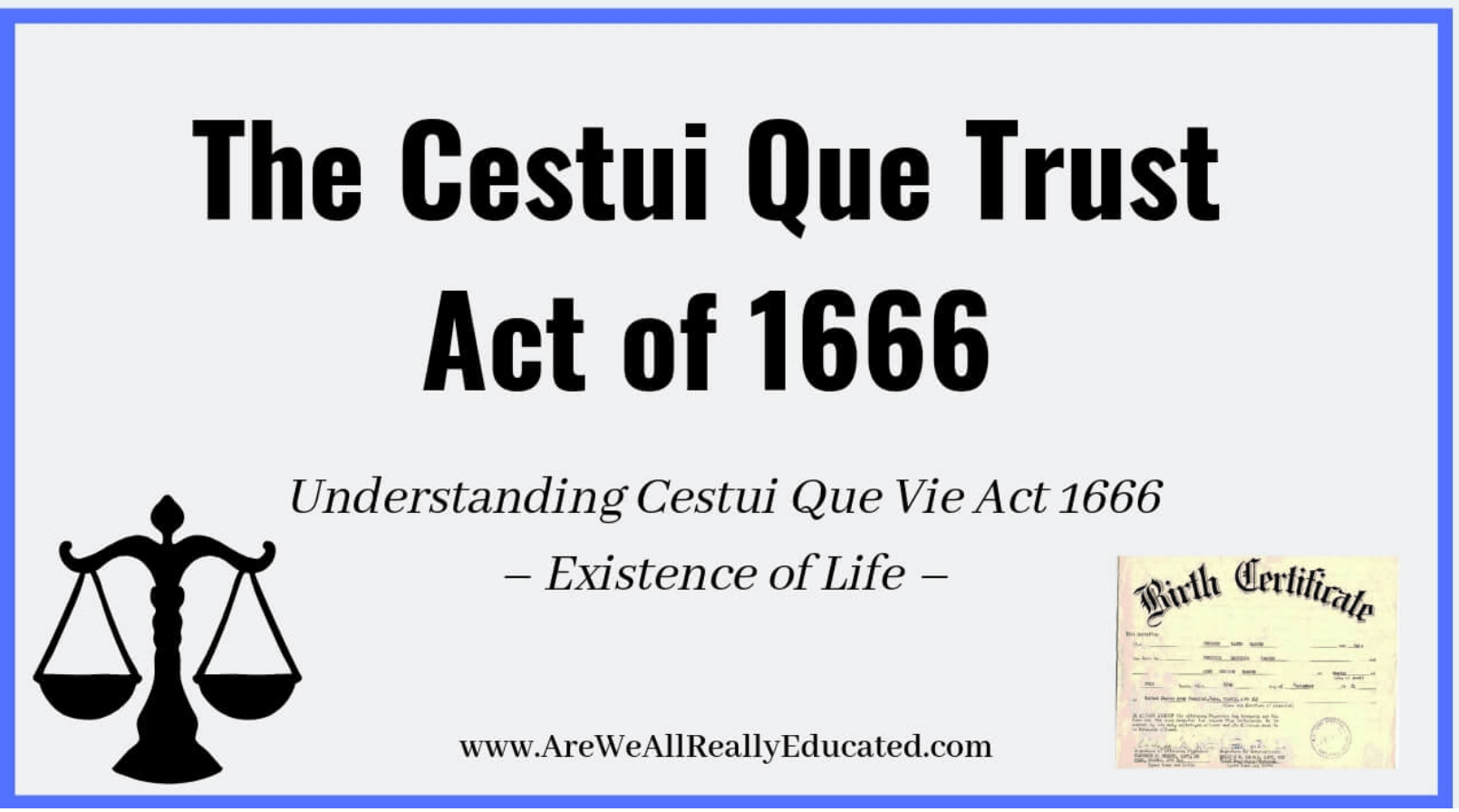 London in 1666, during the black plague and great fires of London, Parliament enacted an act behind closed doors, called Cestui Que Vie Act 1666.

The act being debated was to subrogate the rights of men and women, meaning all men and women were declared dead, lost at sea/beyond the sea. (back then operating in Admiralty law, the law of the sea, so lost at sea).

The state (London) took custody of everybody and their property into a trust. The state became the trustee/husband holding all titles to the people and property, until a living man comes back to reclaim those titles, he can also claim damages.

When CAPITAL letters are used anywhere in a name this always refers to a legal entity/fiction, Company or Corporation no exceptions. e.g. John DOE or Doe: JANE

2) STRAWMAN: common term in United States of America or Canada

These are the legal entity/fiction created and owned by the Government whom created it. It is like owning a share in the Stock Market, you may own a share… but it is still a share of the Stock.

Our only way out is to reclaim your dead entity (strawman) that the Crown created, become the executor and then collapse the called Cestui Que Vie trust and forgive yourself of your debts and then remove yourself from the admiralty law that holds you in custody.

When London burned, the subrogation of men’s and women’s rights occurred. The responsible act passed… CQV act 1666 meant all men and women of UK were declared dead and lost beyond the seas. The state took everybody and everybody’s property into trust. The state takes control until a living man or woman comes back and claims their titles by proving they are alive and claims for damages can be made.

This is why you always need representation when involved in legal matters, because you’re dead.

The legal fiction is a construct on paper, an estate in trust. When you get a bill or summons from court it is always in capital letters, similar to tomb stones in grave yards. Capital letters signify death. They are writing to the dead legal fiction. A legal fiction was created when someone informed the government that there was a new vessel in town, based upon your birth.

Birth Certificates are issued to us by the Doc. just as ships are given berth Certificates at the Dock. It’s about commerce. We come from our mothers waters. Your mother has a birth canal just like a ship. The ship moves by the sea current just as we are able to move by the currency.

All this information relates to how the general public are still legally tied through Maritime Admiralty Law. Through this ancient legal construct we can be easily controlled and duped. Learning about your legal fiction helps you to unlock yourself. Otherwise you are just an empty vessel floating on the sea of commerce. Parents are tricked into registering the birth of their babies.

In about 1837, the Births, Deaths and Marriages act was formed in UK and the post of registrar general was established. His job was to collect all the data from the churches which held the records of birth.

Regis from Queen or Crown

All people are seen to be in custody of,” The Crown”. This allows people to function in commerce and to accept the benefits provided by state. We have to understand who we are as men and women and how we can relate in the system. The City of London is a centre for markets, where merchants work. Then there is Mercantile Law. It comes from Admiralty Law. Look at the symbols in your City Courts that relate to Admiralty.

So where you have commerce and money, you also have “justice” and “injury”. You need to understand the bankruptcy before you can understand the judiciary. We have accepted the claim to accept the summons, yet ONLY the dead can be summoned. There is an obligation to accept any liability which has been created.

We are operating in Admiralty

A not guilty plea, or ANY plea admits jurisdiction. The strawman, aka legal fiction is always guilty. Barristers and solicitors make a living out of creating controversy. By creating a controversy you become liable for the case.

To remain in honour you have to accept a claim and settle (discharge) it. Then you add conditions, ie. “I accept on proof of claim and proof of loss”. This gives the liability back to them. The legal fiction is always guilty. Only in the High Court, can the real man or woman appear. Games are played on courts, hence the name ‘court’. It is a game with actors (acting on acts). It has to be treated as a game and just business. Court room dramas are misinformation.

In the public, we’re operating in bankruptcy and you receive benefits. It takes a lot of time, effort and study to understand and use these tools. You have to be prepared to go fully through the process, get the right tool out of your toolbox at the right time.