Prepare For Change
Home ARCONTES The battle for The Republic and world freedom is under way –...

US patriots gather in Washington DC on January 6th, around the Washington Monument – a historical symbol of the global deep state. The relative few who stormed the Capitol Building was essentially a minor incident (almost certainly a psyop used by both sides), that the Democrats have turned into “an assault on democracy” and an “insurrection”.

THE “10 Days of Darkness” period we were warned of by QAnon many months ago has arrived. This is the battle for the true republic of America. It’s also a battle to defeat a massive criminal election theft by the deep state and a historic battle for freedom worldwide.

President Trump was reported by SNAFU radio as being at a secure underground command post with his family. It is mostly likely in Colorado, in the nuclear command centres. The well-connected UK patriot Simon Parkes, broadcasting on Bitchute on Sunday night, said President Trump had signed the US Insurrection Act the night before. Even Newsweek reported this, but claimed it was false. “TRUMP signed the insurrection act last night according to Simon Parkes. I know Simon and he is in direct touch with the Trump team. — KERRY CASSIDY (@projectcamelot) January 10, 2021”

But the crooked and corrupt US Democratic Party, their puppet so-called president elect Joe Biden, the media and the deep state apparatus that has remained in place through the first four years of Trump, is now going after not only Trump, but millions of his supporters. This is stupid, desperate overreach. They are doomed to fail and are desperately trying to shut down the internet alternative media channels (like Cairns News) in order to dominate the global narrative through their mainstream media propaganda channels.

The Democrats and the global deep state are well aware that Trump has something going, but not fully aware of what’s going on, which is why they are desperate to impeach him a second time. Typically, they are accusing Trump and the patriots of the thing they are guilty of – insurrection. 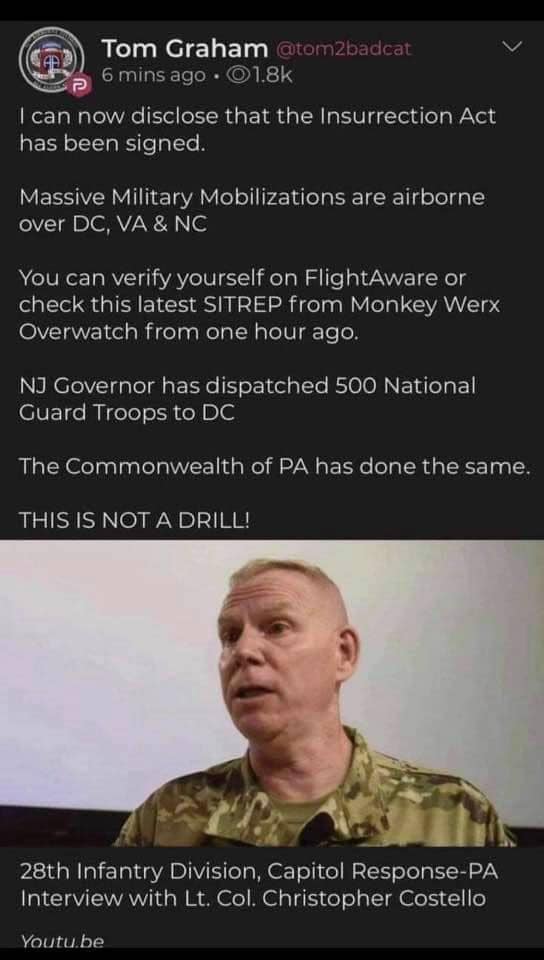 The Democrats and their jackal media have seized upon the Capitol building incident on January 6 to paint Trump supporters across the board literally as dangerous insurgents. But do the patriots care? Absolutely not. They will be protesting at state capitols across the nation and elsewhere. Many will be preparing under arms for the attempted takeover they have long expected.

Historical deep state propaganda rag, the New York Times and other mainstream media are cheering on this attempted socialist purge of Trump and his supporters – who are probably the majority of Americans. “State Capitols are confronting threats ahead of Biden’s inauguration,” the Times reported on Monday (US time). “A growing number of institutions and businesses are cutting ties with Trump. Arrests have climbed in the days since the Capitol was overrun.”

Over the past few days, blackouts worldwide have been happening in relation to this fight for the republic and world freedom. Pakistan was hit with one to disrupt a planned sale of General Electric to a Chinese (CCP) conglomerate. Others happened in Italy in connection with the hacking of the US election by a former IT manager and other related turmoil. Berlin also had one, apparently related to a clean-up operation of Dominion Voting Systems. And in Canada, border restrictions were in force in Quebec. Victoria, seat of the most radical, dictatorial, deep-state and China connected state government in Australian history, also had blackouts on Monday. We can only speculate at this stage as to whether it was triggered.

The promise of Trump and the patriots is that President Trump will remain President for at least another four years. And if reports are true, he may go on for another four years after that because he has reportedly dismantled the Banking Act of 1871, which installed the corporate central banking system in the wake of America’s debt crisis following the 1860s civil war.

Citizen journalists like us worldwide, were on Monday night (Australian Eastern Time) frantically alerting people over social media as to what’s happening and telling them to flee to GAB.ai, one of the few free remaining websites apart from the Dark Web (for those familiar with its ways). GAB.ai, unlike Parler, has control of its own server.

Parler, which used a server owned by Amazon, was attacked late last week when Google withdrew its user apps from Google Store. Parler’s “crime” was that it was not pursuing the same censorship … sorry “content controls” … of Big Tech. Then on Sunday night, Parler was gone. Names and posts had also been harvested for the Democrat purge of Trump supporters.