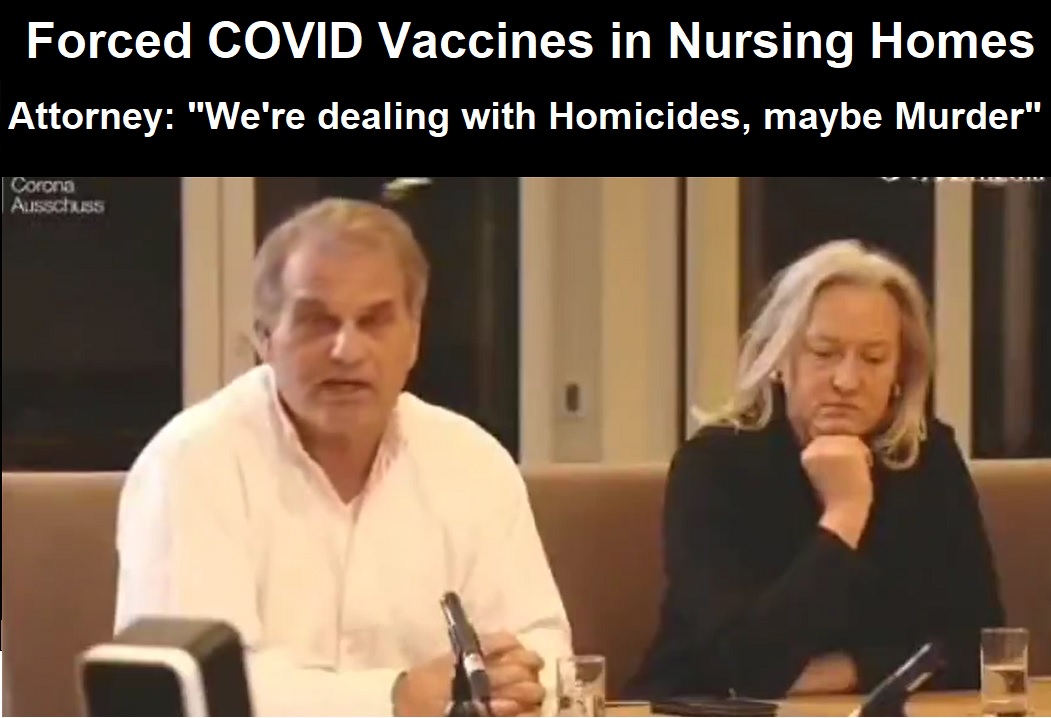 Earlier this week we published the English translation of a video in German that Attorney Reiner Fuellmich published with a whistleblower who works in a nursing home where several residents were injected with the experimental COVID mRNA shots against their will, and where many of them died a short time later. See:

Since that interview was published, other whistleblowers in Germany who work in nursing homes have also stepped forward, some with video footage showing residents being held down and vaccinated against their wish.

This is from our Rumble channel, and it is also on our Bitchute channel.

Attorney Reiner Fuellmich, talking about the residents who were previously in good physical health and only suffered from “dementia,” stated:

One of them was a runner, in his late 70s, or WAS a runner, I should say, who was also an opera singer.

He outran one of the nurses who is in her mid 30s. He was still singing operas on the day that he got vaccinated.

After he got vaccinated, a couple of days later, he died.

One of the most disturbing things about what these whistleblower videos reveal, according to Attorney Fuellmich, is that now they are getting more and more calls from other whistleblowers in nursing homes, in Germany and around the world, where they are reporting the same things.

We are getting more and more calls from other whistleblowers from other nursing homes in this country, plus we’re getting information from other countries, Sweden for example, Norway for example, Gibraltar for example, there are also incidents in England and in the United States that match these descriptions.

Attorney Fuellmich is not afraid to state exactly where this evidence leads us:

It means that people are dying because of the vaccines.

What we are seeing in this video clip is worse than anything we ever expected.

If this is representative for what’s going on in the other nursing homes, and in other countries, then we have a very serious problem.

It looks more and more as though we’re dealing with homicide, and maybe even murder.

We are Witnessing a Eugenics Program that Includes Genocide

How fitting that the tide of whistleblowers coming forward now is gaining steam in Germany, whose population is probably all too familiar with their country’s own history of the eugenics program that was implemented in Germany during WWII.

You will not escape, and you will not be able to claim ignorance as an excuse to participate in murder.

As for the American public: will you finally wake up and start protecting the innocent? Or will you stand by and be quiet, following the poor examples in Germany during WWII, where most of the public said and did nothing?

Rescue those being led away to death; hold back those staggering toward slaughter.

If you say, “But we knew nothing about this,” does not he who weighs the heart perceive it? Does not he who guards your life know it? Will he not repay each person according to what he has done? (Proverbs 24:11-12)