Crime Minister Benjamin Netanyahu of Israel and his fellow Satanists staged a human sacrifice on the temple mount in a desperate bid to retain power and avoid war crimes tribunals, according to Mossad sources.  British intelligence also confirms a mass killing event took place but details of exactly what happened are scarce.

MI6 sources say there was “some kind of massacre at the Al-Aqsa Mosque on the Temple Mount.  We have a suggestion this is all purely Khazarian Mafia with some CIA thrown in.”

We have previously reported the original Netanyahu is long gone and so, according to Mossad, the figure now presiding over the massacre of Palestinians is “Bibi the clone.”

MI6 adds the “Jala Tower in Gaza was attacked to destroy servers with incriminating evidence relating to the mass murder of Palestinians.”

The Satanists behind Netanyahu, in order to stay in power and avoid jail also ordered missile attacks on Israel and blamed it on the Palestinians.  The attacks were designed to cause minimal or no casualties.  Then “retaliation” begins as a part of a final push to wipe out the non-Jewish population of Israel.  It also enables martial law so that he and his goons can stay in power. https://www.bbc.com/news/live/world-middle-east-57099013?ns_mchannel=social&ns_source=twitter&ns_campaign=bbc_live&ns_linkname=609d402bdcb43402eaf618f0%26Netanyahu%20accused%20of%20deliberately%20stoking%20tensions%262021-05-13T16%3A04%3A38.218Z&ns_fee=0&pinned_post_locator=urn:asset:3d293c55-61f7-4728-92cc-9ca9f1b21574&pinned_post_asset_id=609d402bdcb43402eaf618f0&pinned_post_type=share

Remember these people are religious fanatics who think that as soon as they massacre all the Palestinians and ethnically cleanse Israel they can rebuild their temple and enslave humanity forever.

The fact that a small majority of the Israeli people has woken up and voted to remove the criminal regime of Netanyahu is what forced these murderers into their desperate last-minute gambit.

Netanyahu is also now being publicly blamed for the murder of Prime Minister Yitzhak Rabin https://www.jpost.com/Israel-Elections/Gantz-blames-Netanyahu-for-Rabin-assassination-585263

“Netanyahu” and his gang must be hunted down and killed.

Personally, as a genetic Jew, I find it deeply shameful to watch religious Jews who have been ritually castrated (circumcised) worshipping at the wall of a Roman fort in a mistaken tribute to their enslavers.  If it is to be built, the third temple needs to be built elsewhere.

In any case, P3 Freemasons and others say their patience has run out and action will be taken against Israel.  Pentagon sources say the nuclear devices used by Israel to blackmail the rest of the world with their “Sampson option,” have now been neutralized.  That means the people of Israel will be forced to choose between the destruction of Jerusalem or the removal from power of the Satanists who use Netanyahu as their avatar.

There is another reason for the desperate massacres going on in Israel and that is developments in Switzerland involving the Priory of Sion, the Knights of Malta, the Dragon family, and many other powerful groups.  These groups are on the verge of reaching an agreement that will change human history.  In the latest development on this front the Dragon family sent the following message to the Western power groups:

We would like to introduce ourselves to all of you.

We represent the Chinese Royal Family, the so-called Red Dragon Family, which is mentioned in the World Bank documentation of all banks in the world.

We do have access to different forms of financial instruments like Bonds, Bank Guarantees, and Stand-By Letters of Credit.

We also have access to movable gold bullion and cash deposits all around the world.

We also have some different historical boxes that we are able to redeem if any of you have access to these types of instruments to redeem them.

I will be able to meet you all in Switzerland or any other location that is possible for you and me to travel to, considering the Covid-19 traveling restrictions.

I am grateful to the White Dragon Society for introducing us to all of you.

I would be grateful for you all to come back with what form of financial instrument or cash funds you are capable to work with.

Also, we do have heritage accounts that we have full access to if that is something we could do some arrangements so that we can fund all the projects that this world needs so much.

The Ambassador of the Red Dragon Family

The dragon family representative suggested the Western banking families could have their debts, running into the “quadrillions of dollars,” written off if they agreed to set up and jointly fund a future planning organization. He said:

“For example, we have a Treaty of Versaille Box worth $33 trillion that we can let them have for 1% of face value [that is still $330 billion] and use that to set up the organization.”

The Dragon family can also offer physical gold, cash, or any of a range of bonds, he added.

The representative also had an interesting story to tell about former Philippine leader and Dragon family head Ferdinando Marcos.  “Marcos survived his so-called death and remarried a Chinese woman,” he said.  Also, Marcos had a son from a marriage with a Dragon family member called Emota that took place before he married the infamous Imelda.  This son has many assets that can also be used, the representative noted.

The Dragon family says they will only work through the White Dragon Society in the West.  They also warned that if any dragon family member is killed, then the people responsible and their families going back 9 generations will be killed in retaliation.

There is also a consensus that if the groups in Switzerland refuse to come to a deal there will be no choice but military action including nuclear weapons, the Dragon family, MI6, Pentagon, and P3 Freemason sources agree.  The ball is now in their court.

We realize this group, through Klaus Schwab (pictured below) 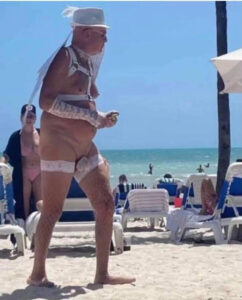 of the Davos World Economic Forum, are offering their own “great reset.” https://www.weforum.org/agenda/2020/06/now-is-the-time-for-a-great-reset/

If you read their words it sounds mostly good, filled with talk about reducing income inequality, protecting the environment, etc.  However, there is a catch:

“We will give you all these nice things but first you must take your vaccination.”

They are trying to vaccinate the entire population of the planet with god knows what to fight a disease that they cannot even prove exists.  It is sort of like “drink your cool-aid and then you can go to heaven.”

There is also a clear degeneration of the whole Covid-19 business into a farce.  The stories below are good examples saying that “Dracula’s castle will be used to administer vaccines,” and “China has deployed troops to the top of Mt.  Everest to stop Covid,” and that “Covid will enter your penis and make you infertile.”

Also how many cool-aid drinkers out there will believe this video about getting a daily Covid passport? https://www.youtube.com/watch?v=8RJZj4PUcIA

Nonetheless, the fact that so many sheeple are wearing masks and lining up for vaccines shows just how insidious the Khazarian Mafia control grid really is. 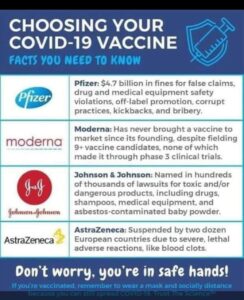 Here is an example of how this group controls most of the world’s so-called civilian governments.  Last week slave Prime Minister Yoshihide Suga of Japan read the wrong script when he was asked the following question by “opposition MP” Renho:

“People are arriving in ambulances at hospitals around Japan and are not being admitted…The situation is getting worse…So Prime Minister if the Olympics are held and both Japanese citizens and Olympic athletes arrive at the hospital at the same time, who will be given priority?”

Instead of answering the question, the slave Prime Minister read a script about how Pfizer was going to supply vaccines to Olympic athletes so it would not affect vaccine supplies in Japan.  Renho then angrily asked for the Prime Minister to be shown the proper page on the script to read from.

This confirms what many bar hostesses who cater to politicians have told me over the years and that is that when they are drunk the politicians admit to being actors paid to read a script.

Please watch the video below to see for yourself what a sham so-called Democracy is in Japan.

This is not just Japan.  The same is now true for the U.S., Canada, England, and many other countries.  Democratic processes have been subverted by stealth by the Khazarian mafia.

Here is what a senior European royal had to say about the situation:

“We have taken note of the session of the lower house of the Japanese legislature.  All of the world’s civilian governments are the subject of the Nuremberg Protocols.  The call for evidence is ongoing in Germany.  Only Germany can know from its bones the chilling recollection of history and that has not evaded them nor all of us who swore no more of world war and the horrors of it.”

We note the military in France, the U.S., Canada, and elsewhere are finally beginning to take action against the stealth hijacking of governments by a Satanic mafia. https://www.theepochtimes.com/120-retired-generals-military-officers-sign-letter-warning-of-conflict-between-marxism-and-constitutional-freedom_3813043.html

Despite firing a whole slew of Canadian military officers on spurious charges, Prime Minister Justin Sinclair Castro of Canada will go to jail, and so will many of his fellow gangsters.

The fake Biden administration in the U.S. is also collapsing.  Their attempt to buy popularity by handing out money led to a record 8.1 million unfilled job openings (why work if you can get free money?).  They are also spending 90% more than they earn, racking up record trade deficits and stoking hyper-inflation. https://www.zerohedge.com/markets/nobody-wants-work-job-openings-soar-record-high-81-million-smashing-wall-street

The Rockefeller crime family behind the Biden fake presidency is also shutting down gas pipelines, sabotaging bridges and engineering food shortages, etc. all in a doomed bid to retain power. https://www.infowars.com/posts/pipeline-inspector-calls-in-to-the-alex-jones-show-its-100-a-manufactured-collapse/

Maybe next they could show aliens landing on Tien An Men square.

As the old curse goes, “May you live in interesting times.”