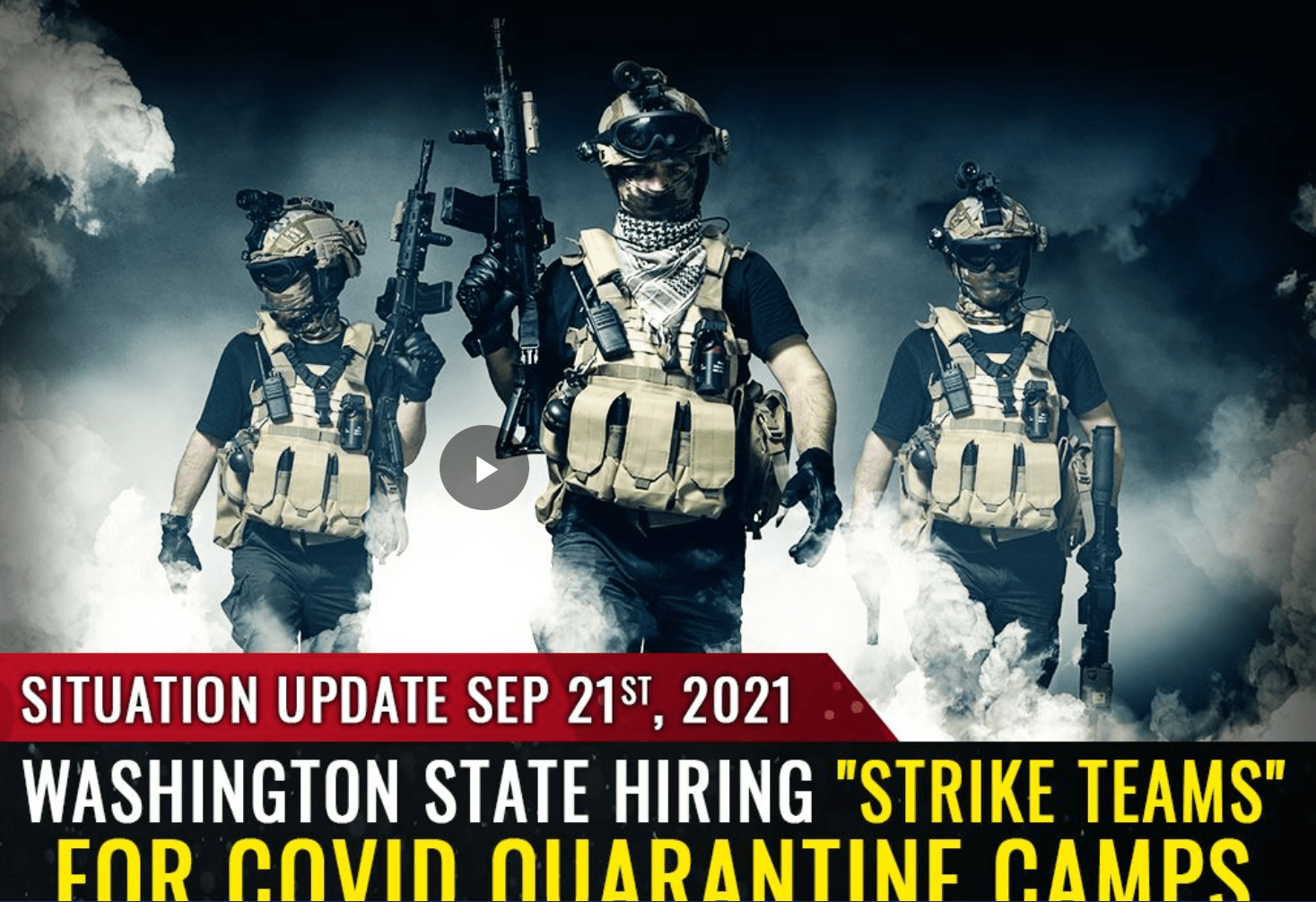 The government of Washington State has stealth edited a public jobs listing that called for hiring “strike team consultants” for an isolation and quarantine facility located in Centralia, WA (see link below). After news about the job listing went viral, the job listing was altered to remove the term “strike team” from the job title as well as the “duties” section of the job description.

The original URL of the job posting also contained the “strike team” term, but it was replaced by a new URL lacking the term. You can see the original URL in this link.

We are also showing screen shots of the original listing below.

As part of the stealth editing, the Washington government also removed “strike team” from the following duties description:

Maintaining the readiness of the isolation and quarantine strike team, facilities, and equipment.

After the job listing was edited, that duty description at first read:

Maintaining the readiness of the facilities and equipment.

Notice that this duty description removed the terms “strike team” as well as “isolation and quarantine.”

That duty description line was later edited yet again to include comments about doing laundry and making beds. So now they want us to believe that a job listing for “strike teams” actually means people who will make beds and do laundry.

Maintaining the readiness of the facility and equipment which includes ensuring contractors have cleaned the facility adequately.  Staff may also be responsible for making beds, doing laundry, and restocking supplies.

Really? They want us to believe this? (Gee, I thought I was joining a kick-ass strike force assault team, and all they have me doing is the f##king laundry!)

When governments use the term “strike team,” they are of course referring to a heavily armed assault team that uses violence (or the threat of violence) to achieve its goals. In this case, their goal is obviously medical kidnapping.

The purpose of the “strike team” is to raid the homes of unvaccinated people and force them into quarantine / death camps at gunpoint, after which many will likely be exterminated. Their deaths, of course, will be blamed on “covid.”

Nowhere in the history of any government, anywhere in the world, have “strike teams” sat around folding laundry and making beds, which is the current (laughable) cover story now appearing in the edited job listing. Do they really think we will swallow that one? “Hurry, go get more pillow cases… send in the strike team!”

The fact that government goons in Washington State first posted the job description as a “strike team” ad, and then later tried to surreptitiously remove the term from the listings in order to hide it, reveals a shocking level of deception.

The informed American people already know that governors like Inslee, by interfering with ivermectin and other lifesaving, low-cost medications that could be saving lives right now, are culpable in the deliberate mass deaths of “covid” victims, most of whom are actually victims of the spike protein bioweapons jabs that are falsely labeled “vaccines.”

It’s clear that rogue governments in Australia, New Zealand, France, the UK and other countries are gearing up for the planned mass extermination of their own populations, with covid death camps under construction and being celebrated as a kind of “final solution” to the pandemic.

In Australia, covid quarantine camp prisoners are threatened with being “gassed” by the police enforcers there:

In the United States, the CDC’s “quarantine stations” map reveals a nationwide network of death camps already in existence. The CDC’s “green zones” document that describes the operating goals of such camps has no plans for any healthy person to leave such facilities while explaining the CDC plans to meet “minimum humanitarian standards” for the operations of such camps.

It’s also clear from that same document that the CDC plans to separate families by force, using strike force teams to remove people from their homes, rip them from their families, and force them into covid death camps against their will.

Adding to the red alert situation for all this, fake president Joe Biden — an illegal imposter waging war against America — recently signed an executive order adding measles to the list of diseases for which a person can be medically kidnapped and thrown into a quarantine death camp.

This means, of course, that the criminal government plans to “diagnose” people with measles — no doubt using fraudulent PCR tests that can fake any infection — in order to kidnap them and throw them into quarantine death camps. There’s little question that political dissidents will suddenly be diagnosed with measles so that this can all be swept under the canopy of “public health.”

Washington Gov. Inslee is a war criminal waging war against the people of Washington, just like Fauci, Biden, Walensky and others are war criminals waging war against the entire population of the United States. Now all the signs are readily apparent that they are gearing up for mass medical arrests across the country, followed by mass executions and mass graves. There’s little doubt they will also attempt to target unvaccinated people, since those are the ones most likely to survive the spike protein culling attempt and very likely engage in resistance against the global government genocide agenda that’s now under way.