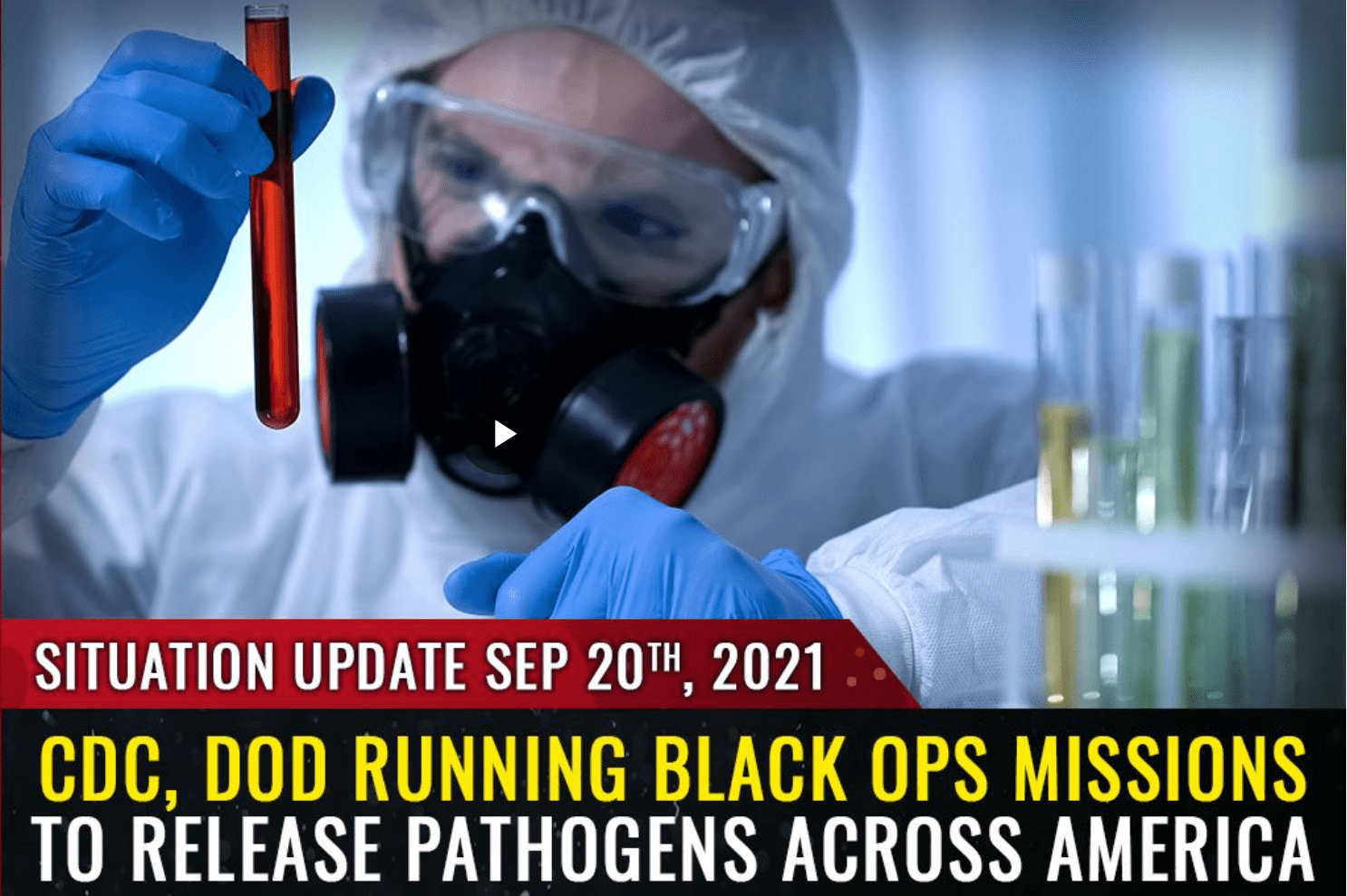 We now have yet more evidence pointing to the ongoing CDC / DoD black ops “pathogen release” warfare activities that were responsible for not only the deliberate spread of measles at Disney Land (to push SB 277 in California) but now are targeting health freedom speakers, advocates and their family members in order to suppress the truth and terrorize those who speak it.

Today’s Situation Update podcast (below) brings you the shocking true story of a man arrested in 2018 who told police he was running a “secret mission involving a virus.” The man carried a DoD weapons permit and owns a company (which I shall not name here) whose name is a thinly-veiled word that means protein engineering. That company had posted customer lists and credentials involving the CDC, FDA, DoD and DHS, among others. Disney was also listed as one of the clients, via a separate Wikileaks document (mentioned below).

The person in question, who I shall not name here because I don’t want to flag automated text search spiders, claims to have worked on the Barack Obama presidential campaign and later served as an FDA consultant on PCR technology, which became the basis for the covid pandemic fraud. In addition, this person was named in a Wikileaks document release as a known government intelligence operative with deep ties to a long list of secret projects that I also shall not name here, because they would set off numerous, dangerous red flags. But if you recall the name of the mystical seeing stones in Lord of the Rings, then you know the name of one of the deep state projects I’m referring to. (Pippin tried to hold it, but it burned him…)

The arrest of this person was covered by the Boston Globe, Vice, Heavy.com and other publishers, but none of them were able to connect it to the much larger story taking place now. The man was arrested with multiple rifles, six laptops, comms gear, tactical vests, a grenade launcher, and a DoD weapons badge, all in a hotel room where he somehow had video surveillance of the room in question. (The story gets very bizarre.)

Chad Chaddington posted a video about all this on Brighteon last week. This is how I first became aware of this story:

Fast forward to 2020 / 2021. We now have health freedom speakers and their family members being targeted with what are believed to be aerosolized bioweapons — perhaps spike protein nanoparticles — which are sickening many people at certain public events. I’m not going to list the names here (listen to the podcast below for the full details), but a long list of speakers and their family members have been targeted and sickened.

In fact, I was hit by this weapon when I spoke in Tulsa earlier this year, along with many other speakers who were also severely sickened. I self-treated the sudden onset of aggressive symptoms with chlorine dioxide — and I shared this publicly on my podcasts at the time — which resolved the symptoms literally overnight. I am personally aware of another person who was sickened at the event and nearly died, taking about 3 weeks to recover. (See the site TheUniversalAntidote.com for details on chlorine dioxide and why flooding your body with oxygen produces such dramatic effects.)

Just recently, many attendees of other health freedom events have been targeted and sickened. Note that I am in no way attempting to tell healthy people not to attend these events, but rather to protect yourself with powerful natural medicine before you attend any such events, as it’s clear these events are being targeted by CDC / DoD black ops teams which are deliberately releasing pathogens.

In other words, the government and the CDC are waging biowarfare attacks on the American people right now, right here on our own soil. DARPA originated the bioweapon as MERS, then Fauci funded the weapon’s gain of function via Wuhan, then China perfected the ACE2 affinity of the spike protein which was separately produced in large quantities. Vaccine deep state operators likely released spike protein nanoparticles on New York City in February / March of 2020, setting off the pandemic hysteria and media campaign that led to the push for mass vaccinations, while Big Pharma made sure the toxic spike protein nanoparticles were inserted into the vaccines and called “antigen targets.”

The result is that now, the biological weapons are in the vaccines. Perhaps this is why vaccines are now confirmed to be killing TWO people for every ONE person they “save.”

Or as James Howard Kunstler explains:

Contrary to the behavior and statements of public health officials and politicians, the news is out that the spike proteins produced by the vax’s mRNA genetic reprogramming are toxic agents that create disorder in the major organs and blood vessels. The news is also out, despite strenuous suppression, that early treatment of Covid-19 with a kit of cheap drugs defeats the disease. People must conclude that there is a malevolent purpose behind the suppression of early treatment. They may also conclude that the vaxes are poison.

We fully support health freedom events and encourage all Americans to peacefully rise up and resist the covid tyranny. At the same time, we want people to be on the lookout for the black ops “vaccine deep state” perpetrators who are pulling this off. Sadly, it is extremely easy for them to accomplish this since spike protein nanoparticles are invisible to the naked eye.

People attending these events should be on the lookout for perpetrators who are using handheld spray bottles or atomizers to spray others, perhaps with such bottles disguised as antibacterial hand sprayers.

Furthermore, if you are a speaker at one of these events, I strongly suggest you bring your own food and do not trust any food coming out of hotel kitchens or nearby restaurants, as the vaccine deep state might easily lace incoming food supplies with bioweapons. The same is true with water supplies. Bring your own food and water. (I often travel with a commercial blender so I can blend up smoothies and drink those all day.)

Be sure to record video at public events. If people are sickened, forensic video analysis may be able to identify perpetrators who weren’t previously obvious.

Most importantly, protect your health with nutrition and emergency remedies. Personally, I don’t travel without chlorine dioxide, colloidal silver, black cumin seed oil, oregano oil, iodine and other essentials which can cover a variety of health support needs. I have even begun to carry a supply of prescription ivermectin and hydroxychloroquine, too. I’m also beginning to recommend people investigate sources of shikimic acid such as star anise herb, certain types of pine needles and fennel seeds (which can be chewed raw to release their shikimic acid).

I am also urging prominent people in the health freedom movement to warn and prepare your spouses or family members who may attend such events. They are being targeted, too, and more than one health freedom advocate has already lost an elderly relative to the spike protein death agenda (via hospital homicide, typically).

As much as I fully support health freedom events, knowing what I know now, I feel obliged to publicly state that immunocompromised individuals may be wise to avoid such events for the time being. That would include people who are very frail, or who have compromised immune response due to other types of pre-existing illnesses such as severe respiratory disorders. Make your own decision, of course, but be aware that what I’m sharing here is very real.

And yes, your government is waging war against you, deploying weapons of mass destruction against truth tellers across America. If you live in America, you are living in a biowar battlefield, and the enemy running the bioweapons is the CDC and rogue elements of the DoD itself, both of which are funded by taxpayer dollars. In other words, this rogue government is taking your dollars, using them to build biological weapons of mass destruction, then deploying those weapons against you in order to cover up its own agenda of mass genocide.

Is Dr. Fauci desperate or just plain crazy? The question may be moot, because it looks like he’s out of running-room on his whole crusade, Covid-19, vaxes, authoritative bullshit, and all. The story has fallen apart. It looks an awful lot like the government is trying to harm people health-wise, while it destroys jobs and small business and ruins households financially, and that counter-story is spreading faster now than Covid-19. It’s fair to ask whether all that has destroyed the legitimacy of the people in charge — but that is only one of several issues converging to detonate the people’s faith in their own government.

It’s not even that “China attacked America” with covid, you see. The real story is that America built the weapon to begin with, laundered it through China with Fauci NIH funding, then the US government deployed the weapon against its own people. The enemy here isn’t merely China. It’s the criminals in your own rogue, illegitimate government that’s run by crooks, fraudsters and anti-human genocidal maniacs. (Oh, and don’t forget all the satan worshippers, too…)

Get the full details in today’s podcast: