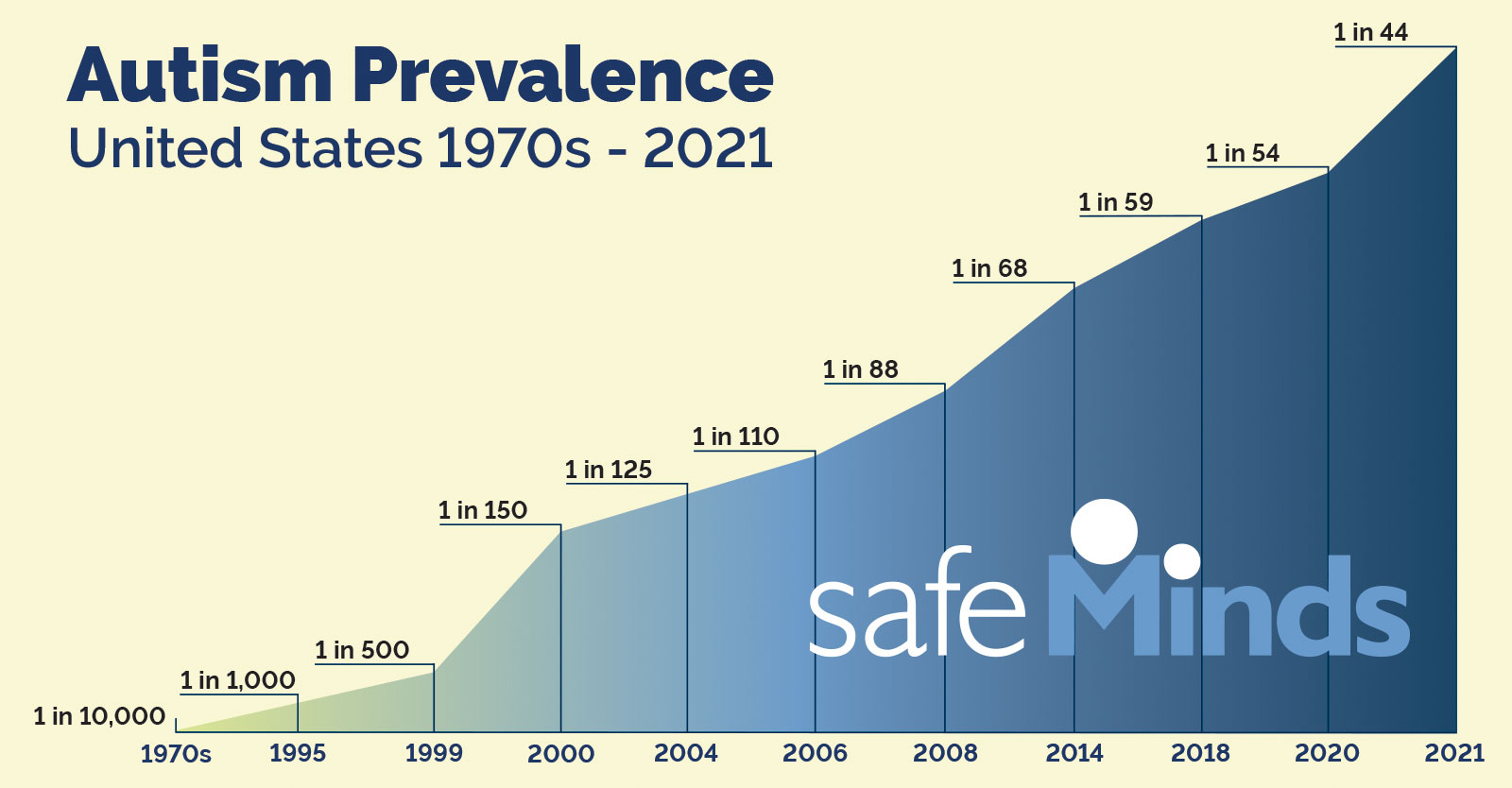 California Surpasses New Jersey for Highest Rates, with 6.4% of the State’s Boys Holding a Diagnosis

The Centers for Disease Control and Prevention (CDC) released its latest prevalence estimates for autism. The center reports that 1 in 44 or 2.27% of American 8-year-olds have an autism spectrum disorder (ASD). This rate is a 23% increase from two years ago, when the figure was 1 in 54 children. The new prevalence reflects a 3.39 fold jump in numbers since the CDC began collecting data in 2000.

The study, published in the December 3, 2021 Morbidity and Mortality Weekly Report, uses the Autism and Developmental Disabilities Monitoring (ADDM) Network to estimate the number of children with ASD and other developmental disabilities living in different areas of the United States. These reports are typically released every two years. The current report studied a total of 5058 8-year-old children with ASD in: Arizona, Arkansas, California, Georgia, Maryland, Minnesota, Missouri, New Jersey, Tennessee, Utah, and Wisconsin. Prevalence rates ranged from 1.6% in Missouri to 3.9% in California.

SafeMinds reached out to Walter M. Zahorodny, Ph.D., to gain insights from this devastating new prevalence report. Dr. Zahorodny is the Principal Investigator of the New Jersey ADDM Network and has been involved with these prevalence reports since their inception in 2000. The following is a transcript of our discussion.

This new ADDM Network report was released a little earlier compared to other reporting periods. Why did that happen?

The new report was released four months earlier than the typical ADDM pattern. Usually, the ADDM reports come out in March or April in order to be linked with Autism Awareness Month. This report is the first time the Network used a different method of case finding. The new method is less comprehensive and less time consuming, which allowed for a quicker completion of the study activities.

The new autism prevalence rate is 1 in 44 for 8-year-old children surveyed in 2018, up from 1 in 54 from the previous reporting period (2016). That rate seems to be a steeper increase compared to other reporting periods. Can you give us any insights on why this occurred?

I am surprised that California has the highest rate of autism. New Jersey had been the leading indicator of autism prevalence for almost 20 years.  Since the ADDM Network never conducted autism surveillance in California, no one had an idea of what to expect. I think California showed a higher rate because autism is prevalent in the U.S. and when you look carefully in a metropolitan area with good levels of health care and education, you will find high rates of autism.

Did the overall male to female autism ratio stay constant in this report compared to other reporting periods? What is the autism prevalence rate for boys? What is the rate for girls?

The ADDM average rate for boys was 3.6%, and the rate for girls was .8%.  Boys outnumber girls by about 4 to 1, as most previous surveillance shows.  I’d call your attention to the fact that the rate of autism among boys in California was 6.4%, however.  That is an unprecedented estimate and will call for continued monitoring and research.

Did the prevalence rate in this reporting period stay consistent across ethnicities and races? Were there any disparities or signals discovered?

In most ADDM states, autism prevalence is similar across races. In a few states, Hispanic children with autism were less likely to be identified.  It is gratifying that the race/ethnicity disparities in autism identification may be declining in many regions.

Last October, we spoke to you about a New Jersey report which showed that middle income families showed a greater rate of autism compared to high income or low income families. Did this report look at socioeconomic status?

This is the first time an ADDM report provided information about socioeconomic status (SES).  In this regard, the distribution of autism seems to be shifting.  For the first ten years of surveillance in New Jersey and throughout the network, autism prevalence estimates were significantly higher in high SES communities.  This report no longer shows the positive association of wealth and autism prevalence.  In some states, prevalence is highest in low SES communities, while in New Jersey autism was most prevalent in the mid SES communities. It is too early to know whether this shifting continues and what it means.

This report was calculated and written during the pandemic. Did COVID affect data collection or any other parts to the reporting process?

It is very likely that COVID-19 restrictions affected data collection at some ADDM sites. It is hard to evaluate the overall effect of COVID-19 on our estimates, however.

Were there any surprises in this report?

I am surprised that California has the highest rate of autism. New Jersey had been the leading indicator of autism prevalence for almost 20 years.  Since the ADDM Network never conducted autism surveillance in California, no one had an idea of what to expect.

Is there any good news?

The good news is that the ADDM Network now includes a region in California, which will be able to provide high quality prevalence findings going forward.

What is your takeaway from this ADDM report?

This report shows that autism prevalence has increased continuously over twenty years in the U.S. and that autism affects as many as 4% of children born in 2010.  Autism rates have not plateaued and so future estimates are likely to continue upward. Since the revised ADDM method is faster, but less comprehensive. It is likely to underestimate the actual number of true cases and may miss children from underserved communities. If autism already affects 4-7% of 8-year-children in many New Jersey areas as shown in our recent study and 4% in California according to the new ADDM findings, understanding the factors driving the rise in ASD prevalence should be a public health priority. In addition, better strategies to improve early detection of autism are needed, as is novel research to identify environmental triggers and risk factors for ASD.