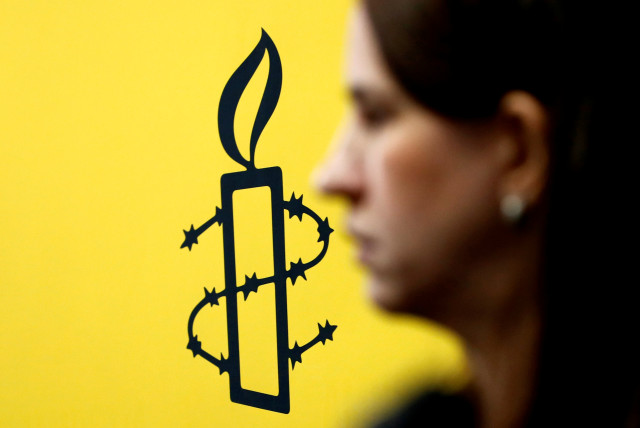 “We found that Israel’s cruel policies of segregation, dispossession and exclusion across all territories under its control clearly amount to apartheid.”

The international community must sanction Israel for the crime of apartheid and impose an arms embargo against it, the left-wing NGO Amnesty International said in a new 211-page report issued on Tuesday.

“We found that Israel’s cruel policies of segregation, dispossession and exclusion across all territories under its control clearly amount to apartheid,” Amnesty Secretary-General Agnès Callamard stated.

KARIM KHAN is sworn in as ICC chief prosecutor, at a ceremony in The Hague on June 16. (International Criminal Court/Flickr) (credit: INTERNATIONAL CRIMINAL COURT/FLICKR)

The international community has an obligation to act,” she added.

The publication of the report was the start of a campaign by the organization and its 10 million members to force Israel to halt its practices of apartheid, Callamard and other Amnesty representatives told reporters at a press conference in Jerusalem.

“Today we launch our findings,” she said. “Tomorrow, Amnesty starts its campaign to amplify the cause of Palestinian and Israeli civil society for justice: to demand that world leaders take robust, human-rights-based action to bring to an end Israel’s free reign… to oppress Palestinians without fear of repercussions.

“Governments who continue to supply Israel with arms and shield it from accountability at the UN are supporting a system of apartheid, undermining the international legal order and exacerbating the suffering of the Palestinian people.”

“This will be a long struggle, but it is a struggle based on moral duty,” he said. “Amnesty will be committed to it until apartheid is dismantled one pillar at a time.”

Amnesty International is the fourth left-wing NGO to accuse Israel of the crime of apartheid in the last two years. It follows similar accusations by Human Rights Watch and B’Tselem. Yesh Din makes a similar accusation, but limits its charges to the West Bank. The other reports spoke of Israeli actions of apartheid within Israeli sovereignty and areas of military rule.

But Amnesty is the first to so forcibly place the report at the center of an international public campaign that would target the International Criminal Court (ICC), the United Nations and Israel’s diplomatic relations, including its strongest allies.

The United States has consistently rejected attempts to label Israel an apartheid state. In Washington in advance of the report’s publication, US State Department spokesman Ned Price said apartheid “is not language that we have used nor would we ever use” to describe Israel. US Ambassador to Israel Tom Nides tweeted that the charge was “absurd.”

In Jerusalem on Tuesday, Amnesty demanded that UN member nations with special ties to Israel link that relationship to suspension of its “apartheid practices.” This includes the US, the European Union, the United Kingdom and Israel’s fledgling ties with African and Arab states.

“Do not support the system of apartheid or render aid or assistance to maintaining such a regime, and cooperate to bring an end to this unlawful situation,” the report said.

It called on the ICC to add the charge of apartheid into its war-crimes probe against Israel and for individual states to prosecute Israelis for the crime of apartheid in their national courts.

Amnesty’s release of its report comes in advance of the 49th session of the Human Rights Council in March, which is likely to debate a report about Israeli apartheid, and in advance of the first report of the permanent Commission of Inquiry against Israel, which is expected to level the same accusation.

The report, titled “Israel’s Apartheid against Palestinians: a cruel system of domination and crime against humanity,” accused Israel of perpetrating this crime since its inception in 1948 and throughout its subsequent history.

“Since its establishment in 1948, Israel has pursued a policy of establishing and maintaining a Jewish demographic hegemony and maximizing its control over land to benefit Jewish Israelis while restricting the rights of Palestinians and preventing Palestinian refugees from returning to their homes,” Amnesty wrote. “In 1967, Israel extended this policy to the West Bank and Gaza Strip, which it has occupied ever since.”

Israel has argued that the extent to which Amnesty took issue with laws that upheld the Jewish nature of the State of Israel appeared to criminalize it for its role as the homeland of the Jewish people, turning its very existence into an act of apartheid.

Such a denial of a Jewish homeland is antisemitism, as defined by the International Holocaust Remembrance Alliance, Israel has said.

Foreign Minister Yair Lapid and his ministry have issued statements on the matter.

Amnesty had previously published a report charging Myanmar with the crime of apartheid for its treatment of the Rohingya, Callamard told reporters.

Amnesty rejects antisemitism and supports Israel’s status as a Jewish state, but not the discriminatory laws that are applied as a result, she said.

“We recognize the existence of the Jewish State of Israel,” Callamard said, adding: “We oppose and denounce antisemitism and antisemitic acts the world over.”

“Such accusations are nothing more than a desperate attempt to evade scrutiny and divert attentions from our findings,” she said.

The report called on the UN to “re-establish the Special Committee against Apartheid, which was originally established under UN General Assembly Resolution 1761 (XVII) of 6 November 1962, to focus on all situations,” including in Israel and the Palestinian territories.

The report criminalized as an act of apartheid Israel’s refusal to withdraw to the pre-1967 lines and its continued development of settlements in the West Bank and Jewish building in east Jerusalem.

Israel’s policies toward the Palestinians were designed to ensure a Jewish demographic majority, the report said, downplaying the Palestinian security threat to the Jewish state.

It also failed to emphasize historical contexts, such as the influx into Israel of stateless Holocaust survivors and Jewish refugees from Arab countries. Nor did it emphasize the active participation of Arab-Israelis in Israeli society, including as judges, doctors and ministers.

Israel has many problems that must be solved, both within the Green Line and especially in the occupied territories, but Israel is not an apartheid state,” Regional Cooperation Minister Esawi Frej (Meretz) said.

The report issued a call for a right of return for Palestinians and their dependents to sovereign Israel, saying failure to do so is part of Israel’s crime of apartheid.

Israel should “recognize the right of Palestinian refugees and their descendants to return to homes where they or their families once lived in Israel or the OPT [occupied Palestinian territories], and to receive restitution and compensation and other effective remedies for the loss of their land and property,” the report said.

Amnesty called on Israel to rescind all discriminatory laws against the Palestinians, particularly with regard to land ownership, home demolitions, family reunification and citizenship. It also called for restitution to Palestinians harmed by such policies.

The report highlighted specific issues relating to the West Bank, Gaza, Jerusalem and the Negev, including a call on Israel to lift its “blockade” of the Gaza Strip.

Israel should “immediately grant legal recognition and status to the unrecognized villages in the Negev/Naqab,” the report said, adding that the Jerusalem Municipality and the Israeli government should “transfer responsibility for planning and building policies and regulations in east Jerusalem to the local Palestinian communities.”

It examined two standards by which it believed Israel met the definition of apartheid. The first is the International Convention on the Suppression and Punishment of the Crime of Apartheid, and the second is Article 7 of the Rome Statute that governs the ICC.

The report was “a clear expression of the new antisemitism under the guise of ‘humanitarianism,’” Diaspora Affairs Minister Nachman Shai (Labor) said.

“It is false, one-sided, completely detached from the daily reality in Israel, and it denies the right to exist of the nation-state of the Jewish people,” he said. “This report is antisemitic propaganda, without a shadow of a doubt.”

Israeli Ambassador to the US Michael Herzog said Israel “is the only democracy in the Middle East where all citizens are equal before the law, including minorities. Crossing the line from criticizing its policies to discrediting its existence as the nation-state of the Jewish people is unacceptable, contradicts the notion of promoting human rights and should be utterly rejected. All Israeli citizens deserve human rights.”