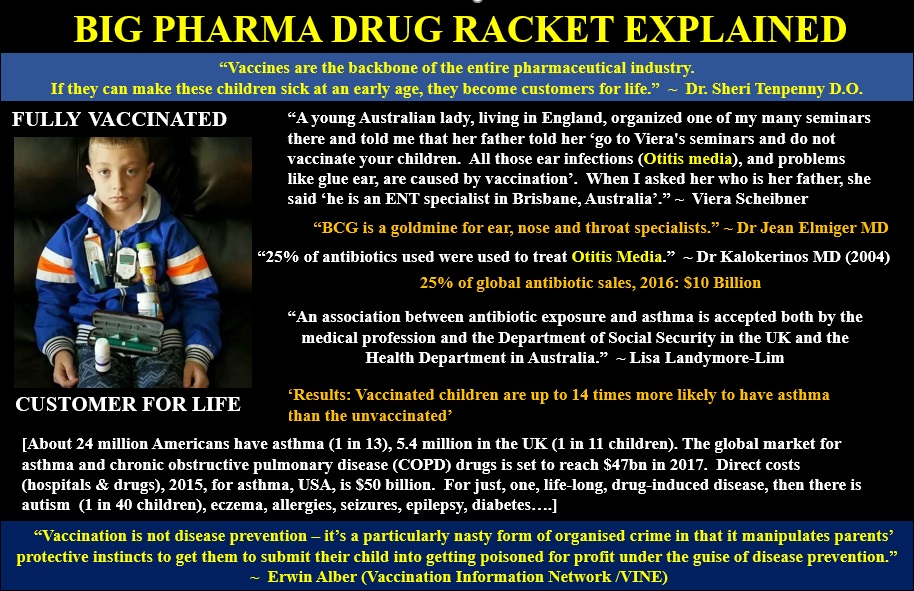 “Medications are palliatives. They are not designed to cure the degenerative diseases of the body.”—-F. Batmanghelidj, M.D.
“To teach the Rockefeller drug ideology, it is necessary to teach that Nature didn’t know what she was doing when she made the human body.”~ Hans Ruesch 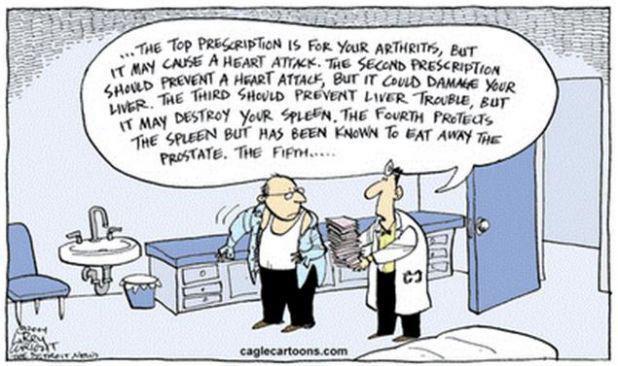 [Allopathy Inc. State Medicine (see: State Murder, Genocide, Terrorism & Abuse), Medical Industrial Complex (see: cartoon, Military Industrial Complex), The Medical Monopoly. Hiding behind these names: Orthodox, Modern, Scientific, Contemporary, Traditional, Conventional, Evidence/Science based, or School medicine. Aka Big Pharma, The Drug Trust, Modern science, The Medical Profession, The Medical Industry, the Cancer & AIDS Industry, Corporate Medicine.
Pure, well documented 1 2 3 4 5, Evil, hence the term Medical Mafia (see: Allopathy Inc personality profile) i.e. Satanic.  Allopathy Inc is a covert Church. Allopathic Medicine is mostly based around patentable drugs (pharmaceutical medicine), with radiation and surgery.  Administered by the ‘Medical Profession’ who are all medical doctors.  These medical doctors that will only use the drug company products are called Allopaths, as opposed to the ones who use alternative medicine (non-Allopathic), such as nutrients.  It is run by the Medical Mafia.   One of the best kept secrets is the Allopathic medical monopoly.  The merger of State with Corporate power is called Fascism, so this is medical Fascism.
If you look into the use of nutrients, herbs and naturopathy (see: Herbs for cancer,  Natural Healing & Nutritional Medicine) you will see that they are far more effective (cure all diseases in fact) than Allopathy (which can cure only bacterial infections), yet we can only get Allopathy on the NHS, a very simple expose of the real situation—monopoly medicine.  Also see: The Vitamin C Conspiracy  and The Cancer Conspiracy  (hence Fascism) just for starters.     The whole enterprise is resting on the Vivisection hoax, with the yearly slaughter of  300 million (1993) animals (ref) (not to mention the massacre of the Sacred Yew trees through Taxol), and the Vaccination Hoax.  Allopathy is the leading cause of child death and disability in the first world (while third world children are given the mercury containing and other withdrawn vaccines), eg autism, and the leading cause of death (“It is likely that over 50 million Americans have died prematurely due to Allopathy”) made worse by its 100 year + suppression of alternatives, true Disease Theory, and the cause of most diseases, while it covertly promotes or turns a blind eye to Junk food, such as Bottle-feeding, & Aspartame & MSG, and other poisons such as Fluoride  and Mercury amalgam.
Imagine that instead of saying you were going to the doctor, you said you were going to see the Allopath, like you do with Homeopathic or Naturopathic doctors.  Think about that, and you will see why Allopathy is a non-word. Also see Nazi connections to Allopathy.
Allopathy is essentially an extortion scheme using a Protection Racket called The Fear of Disease.  It has taken over from religion as a false God (see), and derives its power from Big Brother, it being his main source of income (covert taxpayer robbery) and means of control, as the Church used to be in the old days. Big Pharma also meshes with Sex Inc.]

“The beginning of wisdom is to call things by the right names.”  Chinese Proverb

“They have bought every type of person including Ministers of health in some countries. There is a huge amount of corruption. In my country for example, Denmark, we are regarded as having very little corruption but yet we have thousands of doctors on industry payroll, although we are just 20,000 doctors, so this is effective kind of corruption. The drug industry buys the Professors first, then chiefs of departments, then chief physicians, and so on. They don’t buy junior doctors, so when several thousand are on industry payroll, it’s really really bad.” [vid] Dr Peter Gøtzsche exposes big pharma as organized crime [Gotzsche] 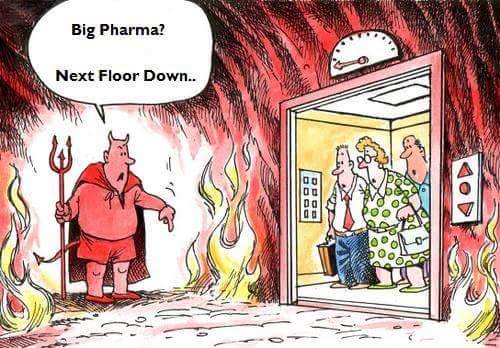 [2015] Vaccine billboards go viral as vaccination truth becomes wildly popular  “And I know that no one can prove that any vaccine ever saved one life or prevented one disease. That point needs to be emphasized. I understand what most people think when I say that, but it doesn’t matter, because the vaccine emperor wears no clothes. It is a colossal fraud. And somebody needs to do this. So I decided that I am somebody.” 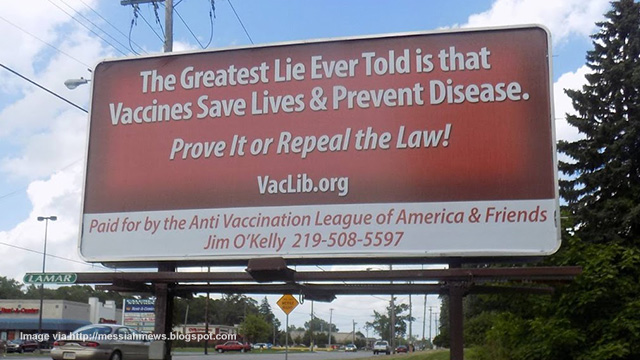 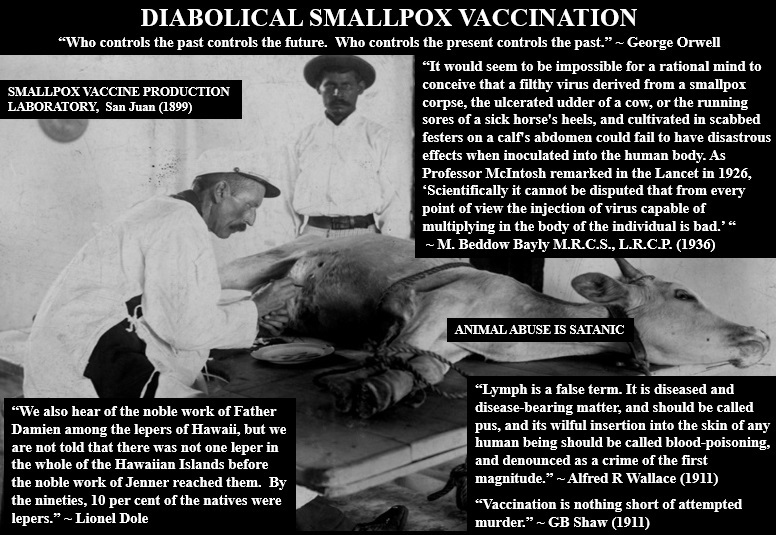 [Media 2003] Most drugs never tested for safety in children

www.pharma-fact.org The pharmaceutical industry portrays itself as an industry fighting to prevent and eliminate diseases but, behind the pretext of this noble cause, it is extorting billions of dollars in subsidies from dozens of governments and is demanding blind obedience from hundreds of millions of patients. As such, the Pharma Facts website describes how the pharmaceutical drug industry is not a health industry at all, but an investment business. While pretending to deliver health to the world, its entire existence is based on promoting diseases as multi-billion dollar markets for patented drugs.

[Media 2003] Most drugs never tested for safety in children 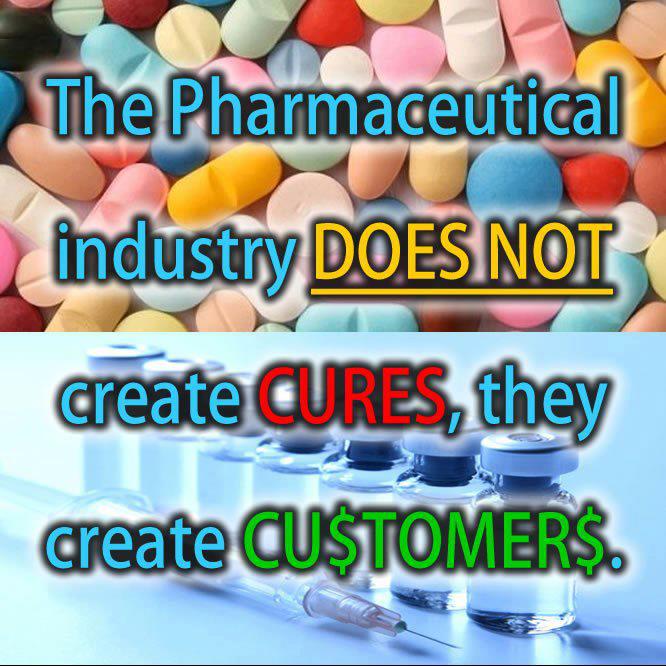 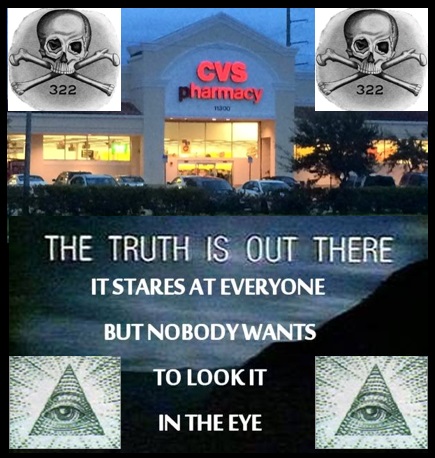