Prepare For Change
Home Astrology Pluto Returns Over America on February 22, 2022 – As it was... 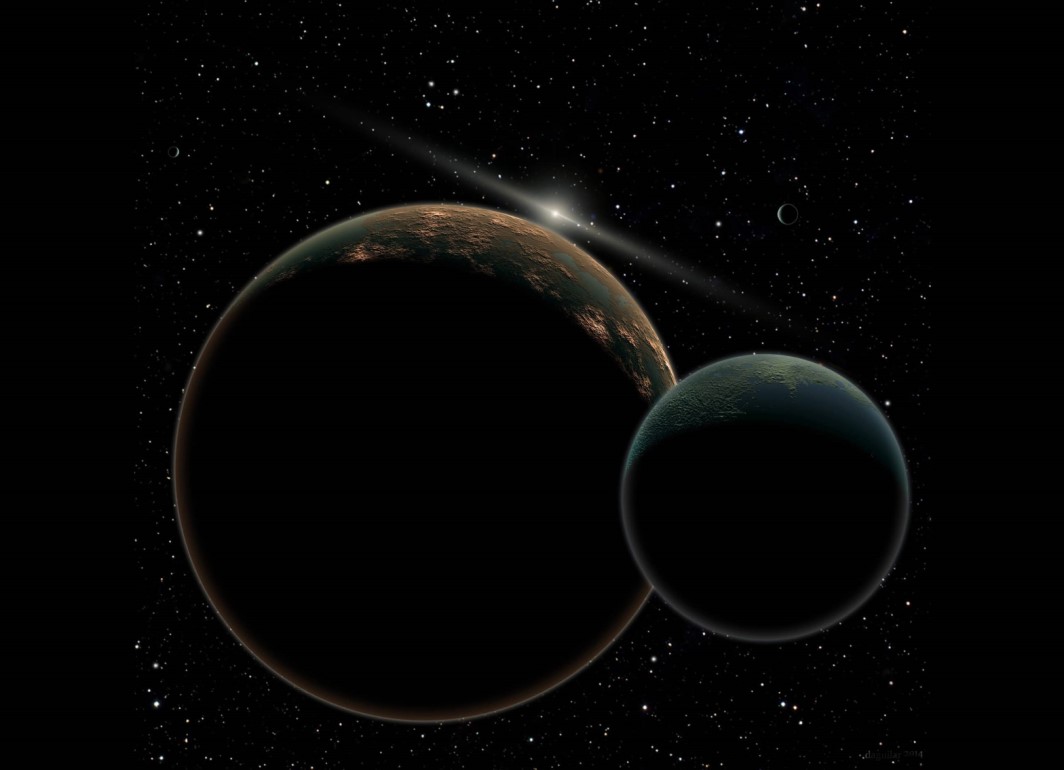 Pluto is the planet of transformation and channels the power of destruction and rebuilding, either for negative or for positive purpose.  It is the planet of mystery, desire, enterprise, and decision making.  It is also associated with reproduction and cathartic transformations in life.  This planet’s influence encourages changes of matter and form.  Pluto is the ruler of the eighth zodiac sign, Scorpio. 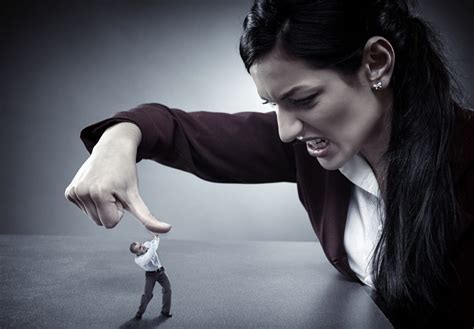 Pluto governs power itself, including struggles between people and countries for domination, and personal power.  It shows up when capable people end up under the thumb of someone else’s control.  Facing down the control and manipulation of others can make us weak in the knees.  But once we do, we are changed forever.  Humanity is now standing up to the manipulation and tyranny of governments and corrupt agencies and corporations now!

Just as Pluto is the furthest planet in the Solar System, it is a planet of boundary, between different forms of life.  Endings, and or death, are not seen as negative events but opportunities for re-birth and transformation into something new.

Pluto’s moon, Charon, is the name of the ferryman who rows the dead across the river Styx.  Styx is the name of one of Pluto’s 4 moons.  The others are Nix, Kerberos (or Cerberus, the 3 headed dog guarding the entrance to Hades), and Hydra.  Hydra has a negative connotation and has been repeatedly used by Marvel comics and movies to represent evil organizations.  In Greek mythology, the hydra is a monstrous serpent or dragon represented as having nine heads, each of which, being cut off, was immediately replaced by two new ones unless the wound was cauterized.  Hydra seems well represented in the last century as the evil has indeed been difficult to destroy.  As one evil world leader is eliminated, new ones crop up.

Pluto’s influence is much like the Hindu Goddess Kali, who is considered to be the Master of death, time and change. 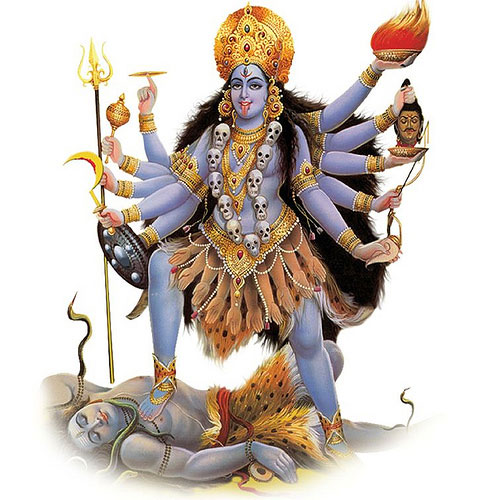 You may wonder, as I did, why does Kali show her tongue? In Devi Mahatmya, Kali unfurls her tongue in her role as the ultimate deliverer called upon to salvage a situation that seems hopelessly out of control.  This is an excelent description of what we have been experiencing. Grass roots protests are taking place all around the world to take back our power from government overreach and give control back to the people.

The date for the birth of the United States is one of the most widely known, even worldwide, on July 4, 1776.  The location for the signing of the Declaration of Independence was Philadelphia, Pennsylvania.  And the most commonly accepted time of birth was determined by English astrologer Ebenezer Sibley at 5:17 pm. Below is a copy of the US Sibley Chart: 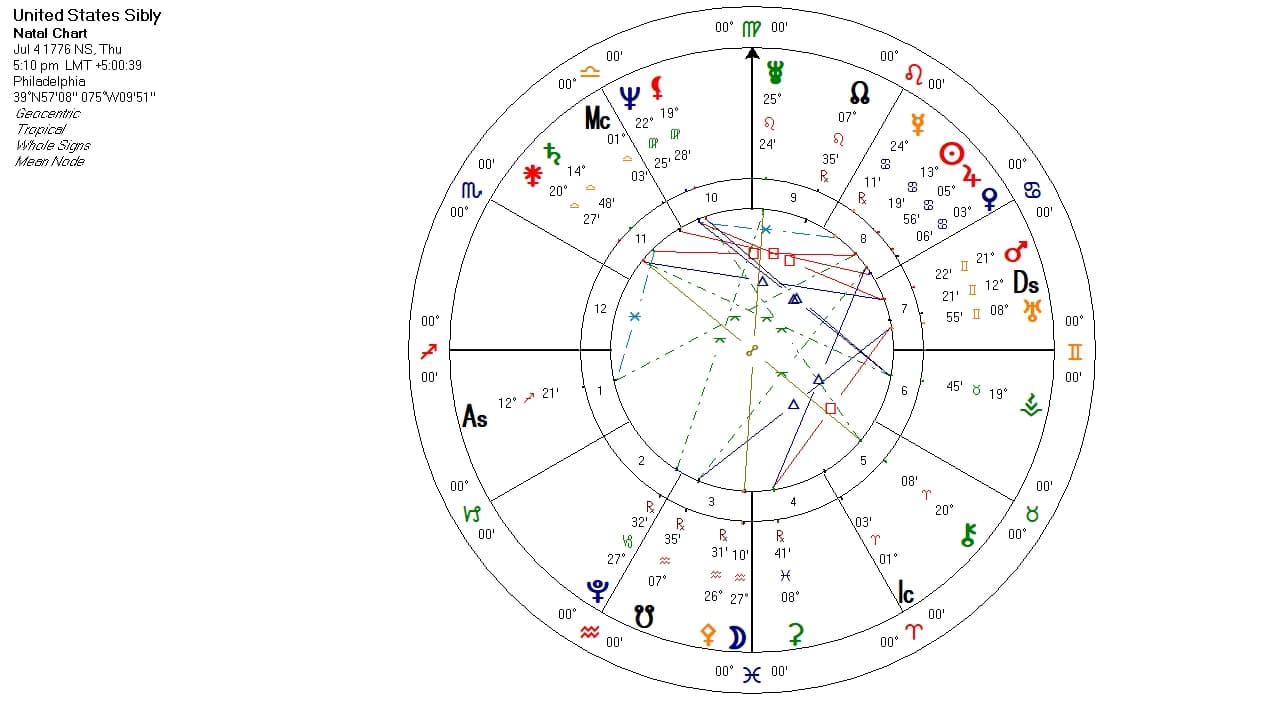 The US Sun sign is Cancer; its Moon is in Virgo, and its Ascendant is Sagittarius.  At this time of birth, Pluto was at 25 degrees and 47 minutes of Capricorn and retrograde. It takes approximately 247 years for Pluto to make a full cycle around the astrology wheel.  Pluto was at 21d27m of Capricorn on August 1, 2019.  While it was still 2 years away and over 4d away from the exact conjunction, people living in the US and observing current events outside already saw and felt some of the impacts of this transit.

Pluto’s Return in the US Chart

Below are two images, one indicating where the Pluto return is beginning to align and the second showing the first exact conjunction, which takes place on February 19, 2022 at 10:22 pm.  Strong effects were felt in 2020 when it got within less than a degree before going retrograde.  Below you can see the position of transiting Pluto in relation to the country’s natal Pluto and then the chart of the first exact alignment: 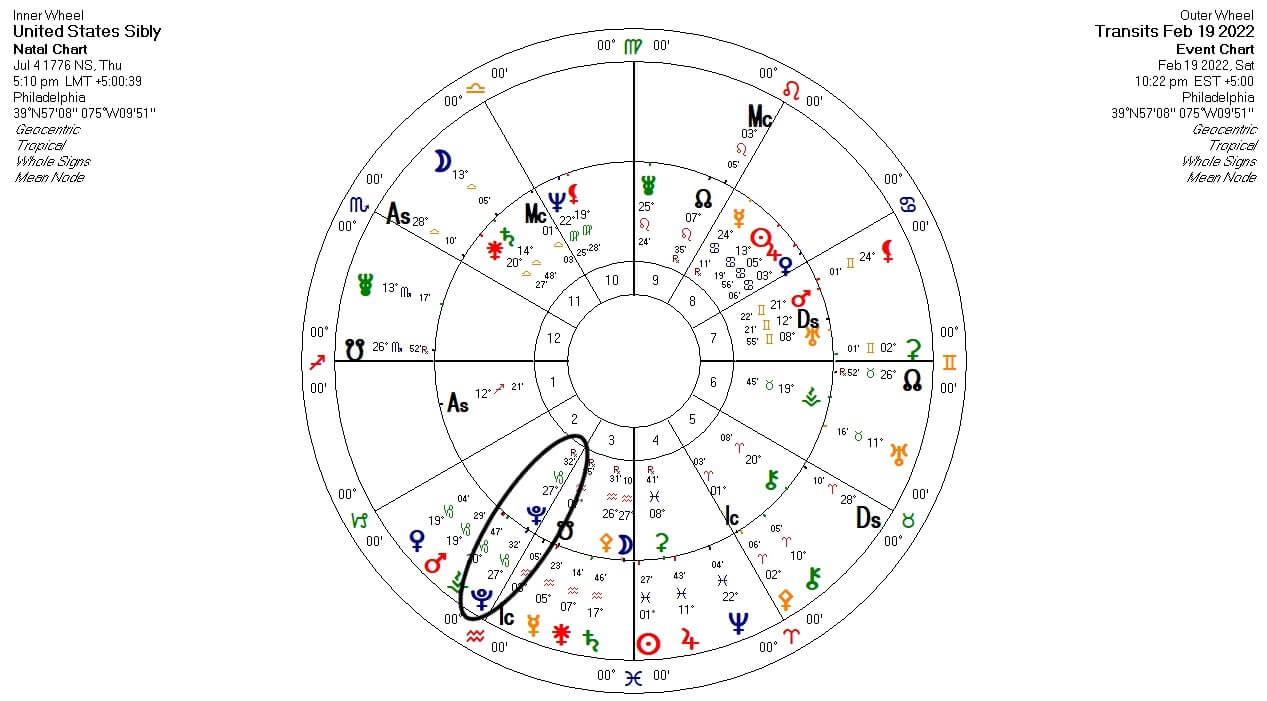 What Can We Expect?

American politics got a “shot in the arm” with the administration that swept into power in 2017 at the national level, largely in response to the administration that took over in 2009 (right after Pluto went into Capricorn). Since then all levels of government have been experiencing a dramatic transformation that will not be fully understood until this transit is done.

It is an old saying that “what goes up, must come down”.  While the US stock market has achieved all-time highs recently, retail businesses have also reached all-time highs, in bankruptcies, direly named “retail Armageddon”.  During the Pandemic, many small bussinesses were forced to close while pharmaceautical companies and big stores like Amazon, and Costco made a killing (pun intended). In April 2021, Amazon Prime Day had sales that surpassed last year’s Black Friday and Cyber Monday combined, which surpassed traditional retail sales. Businesses are relying more and more on automation and artificial intelligence, which will further impact the human workforce. Elon Musk is already proposing autonomous electric trucks with GPS which will make human drivers obsolete if he is successful.

Every major economy in the world is in debt; there is no single large economy that is solvent.  More importantly one of the most significant “too big to fail” issues for the United States is its monopoly on the global currency, which the American dollar currently backs.  A Plutonic level change that could occur during the peak of this transit would be a shift away from the dollar as the global currency backstop, forcing a near-immediate drop from economic superstar to economic every man for the US economy. What will happen when debts cannot be repaid?

Higher education has been evolving into a debtor’s prison and the changing business and economic trends are putting a college education into questions except for the most professional of jobs that require a specific degree, such as law or medicine. At the more basic levels, grade school learning has become fractured into public schools, charter schools, private schools, and homeschooling, pulling farther and farther away from a once cohesive structure of early learning. Home schooling and not being able to socialize with others caused grade point averages to fall while an increase in depression and suicide was at an all time high in our young.

What ever changes Pluto will bring, we know that what happens in America will also have an influence on the rest of the world. Great changes are on the horizon and new ways of providing products and services are emerging. You can help by getting involved in local assemblies and communities for change in your area, or by starting one.

Be the change your want to see in the world.