Prepare For Change
Home Media The crisis in Ukraine exposes the hypocrisy of Israel and its Zionist... 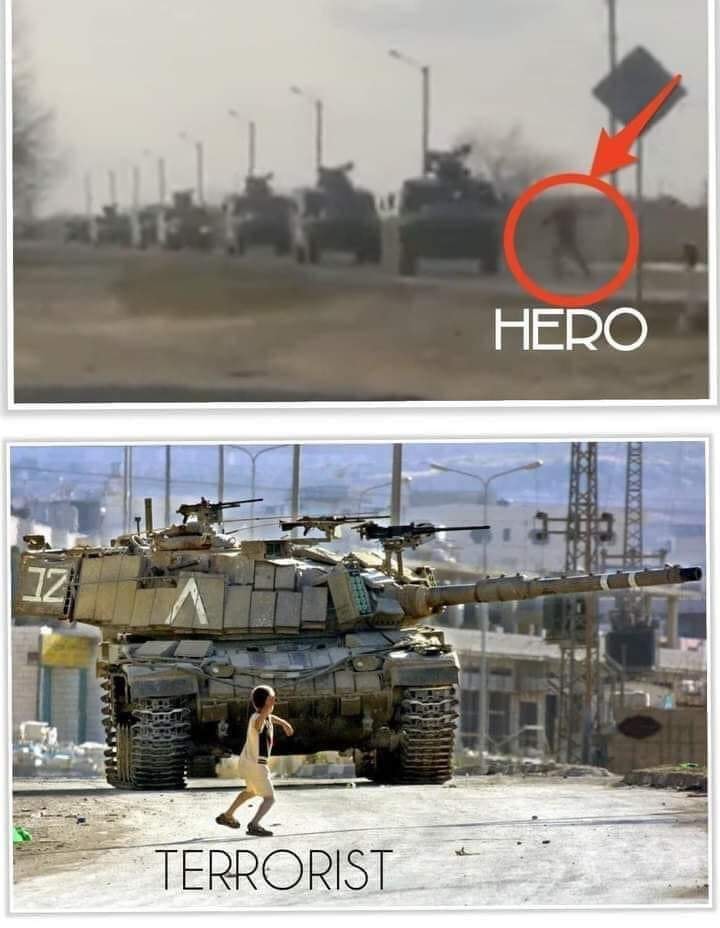 Russia and Israel have something in common – both are invaders. But only one is facing consequences.

The Palestinians have every right to ask why Western leaders, led by Biden, are imposing crippling sanctions on Moscow and threatening more retaliatory action if it continues with its invasion of Ukraine, but don’t take similar action against Israeli colonialism. 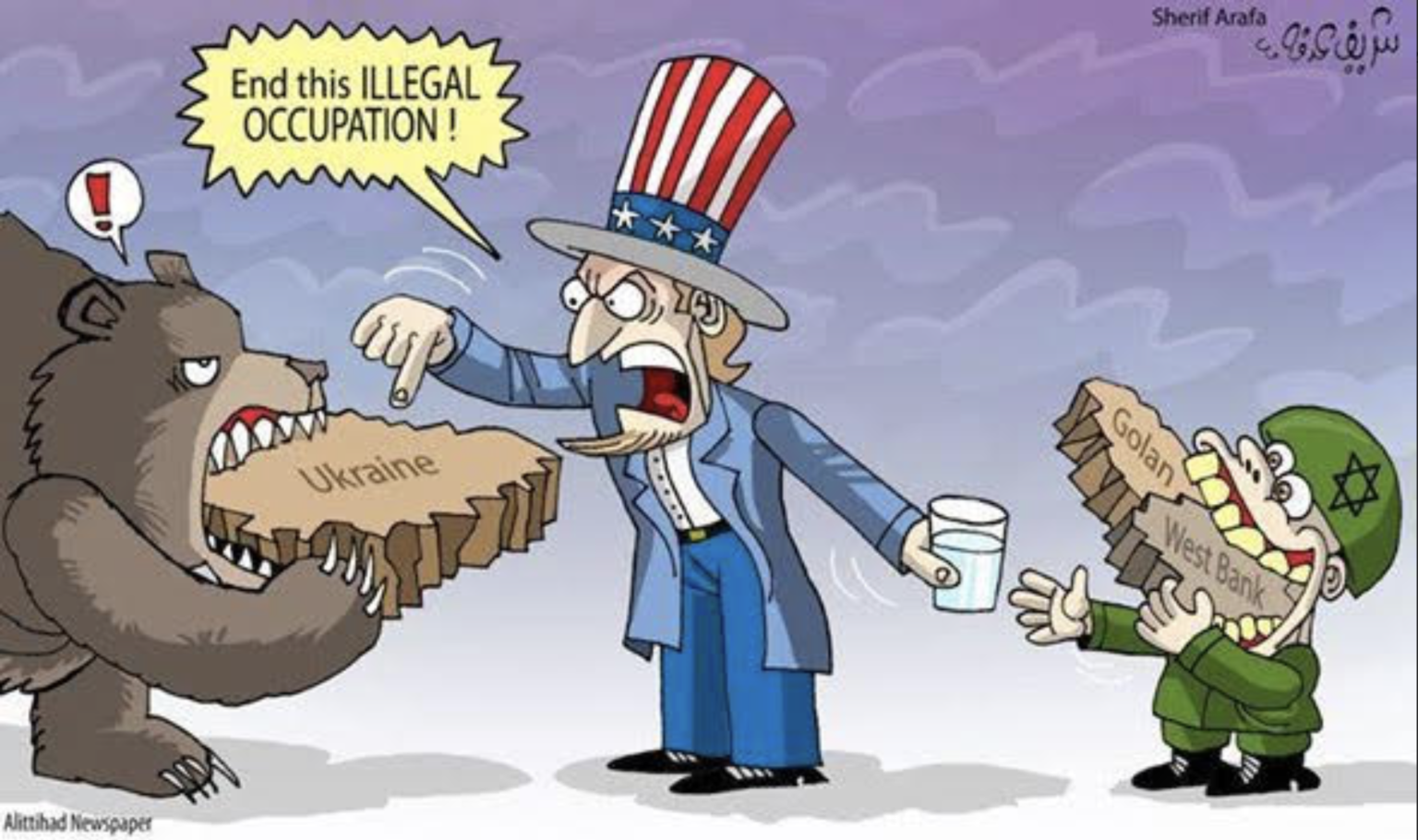 In Scotland, when someone is on shaky ground or skating on thin ice they are said to be hanging by a “shoogly peg”. That is exactly where Israel has found itself over the crisis in Ukraine as the hypocrisy of Tel Aviv and its Zionist allies is exposed for the whole world to see.

According to them all — the US, the UK, the EU and Israel itself — Ukraine’s territorial integrity and sovereignty are sacrosanct. Why, though, do each and every one of them not apply the same principle to Palestine and the Palestinians?

Aren’t the people of that occupied land not entitled to their own territorial integrity and sovereignty without the reality of daily armed incursions by the aggressively-colonial state of Israel, a country which has never declared where its borders lie because its founding Zionist ideology demands its constant expansion into neighbouring counties, not just the land of Palestine?

Until the UN and NATO roll out a level playing field when it comes to human rights, sovereignty and respect for borders, we can expect to witness more invasions and land grabs as powerful states continue to act with impunity.

The old adage that truth is the first casualty of war is playing out before our eyes. It is hard to know what is really happening in Ukraine, with Russia Today taking an obvious pro-Moscow position, while the BBC has gone “full tonto” to use the unfortunate, testosterone-filled, macho language of Britain’s Defence Minister Ben Wallace. Trustworthy sources of news are thin on the ground.

Russian President Vladimir Putin insists that his army is lending support to the breakaway republics of Donbass and Lugansk, but he would say that wouldn’t he? Meanwhile, his US counterpart, Joe Biden, is accusing the Russian leader of a full-scale invasion, but he would say that, wouldn’t he? With reckless calls on all sides inciting other powers to take military action, where is this heading?

The people of Taiwan must be very worried, in case China follows Russia’s example and invades the island, which Beijing believes is legitimate Chinese territory. On Thursday, fighter jets were scrambled because Chinese aircraft were in Taiwanese airspace.

The Palestinians have every right to ask why Western leaders, led by Biden, are imposing crippling sanctions on Moscow and threatening more retaliatory action if it continues with its invasion of Ukraine, but don’t take similar action against Israeli colonialism. These are the same leaders, remember, who turn a blind eye to Israel’s ongoing theft of Palestinian land, and its military offensives against the Palestinians in the besieged Gaza Strip.

Israel stands accused of implementing the crime of apartheid in occupied Palestine by B’Tselem, Human Rights Watch and Amnesty International; committing war crimes in Gaza; and using white phosphorous and other prohibited weapons in the heavily-populated civilian areas of the Strip. Moreover, the Zionist state has still to be held to account for bombing the Associated Press media centre in Gaza.

Without a hint of irony, though, the shameless government in Tel Aviv announced this week that, “Israel supports Ukraine’s territorial integrity and sovereignty.” The hypocrisy is breathtaking.

Israel’s involvement in Ukraine goes beyond mere rhetoric. It has never been too fussy about who it sells weapons to, but this could come back to haunt the Zionist state; the neo-Nazi Azov battalion, which has been on the front line in Ukraine’s war with pro-Russia separatists, is armed to the teeth with Israeli weapons. The battalion is one of many volunteer brigades to fight alongside the Ukrainian army in the east of the country, and has a reputation for brutality.

There are private concerns in the corridors of power that if the fighting against the separatists comes to an end, then the next big threat to the Ukrainian government and the state itself will be the far-right extremists in the Azov battalion. Their openly neo-Nazi leanings are there for everyone to see.

Many of the Azov fighters are anti-Semitic, Holocaust-deniers and admirers of Adolf Hitler, but we already know that Israel is more tolerant of the odious views of those who buy its weapons than, say, promoters of peace and anti-war supporters like the former Labour leader Jeremy Corbyn in Britain.

The current Labour Leader Sir Keir Starmer is leading a witch hunt against party members who are pro-Palestine and anti-Israel, but has no qualms about backing Ukraine, neo-Nazi warts and all, just like his warmongering rival, Prime Minister Boris Johnson. They have both adopted pro-Ukraine postures this week, and yet have not only kept quiet about apartheid Israel’s ethnic cleansing of the Palestinians, but also declared their active support for the Zionist state.

When we look at the West’s complicity over the humanitarian disasters in Yemen, Iraq, Afghanistan, Syria, Libya and Palestine, it’s no surprise that Starmer and Johnson have toed the Washington line like the dutiful lapdogs that they are. All of the aforementioned Muslim countries are victims of NATO aggression directly or indirectly; and all are victims of US imperialism.

This isn’t about taking sides or picking Putin over Biden; I am no fan of either. It’s about peace, which, from where I’m standing, looks to be a million miles away from both the White House and the Kremlin.

Clearly, the US has not lost its appetite for war, despite its humiliating defeat at the hands of the Taliban in Afghanistan last year. Indeed, the American economy thrives on conflicts around the world. The US has around 750 military bases in 80 countries, and Biden is happy to surround Russia with NATO bases and NATO-aligned countries. Putin has grown increasingly agitated about this, and has made his feelings known.

Back in December, the Russian leader initiated talks with America to diffuse the situation. The response from Washington was to kick sand in Putin’s face, the least diplomatic course of action when dealing with a leader whose ego is the size of Red Square. But maybe Biden planned it this way.

In the meantime, Palestinians can only look on in despair and wonder what it will take for the West to stop, pause and consider their territorial rights and sovereignty with the same compassion shown to the people of Ukraine. If, as former Prime Minister Theresa May said in Westminster the other day, it is important to stand up to Russia in “defence of democracy”, then surely that noble principle should be applied everywhere, Israeli-occupied Palestine included. It is hypocritical to do otherwise.