Prepare For Change
Home Media The US And NATO Have Never Been Sanctioned For Starting Wars. Why? 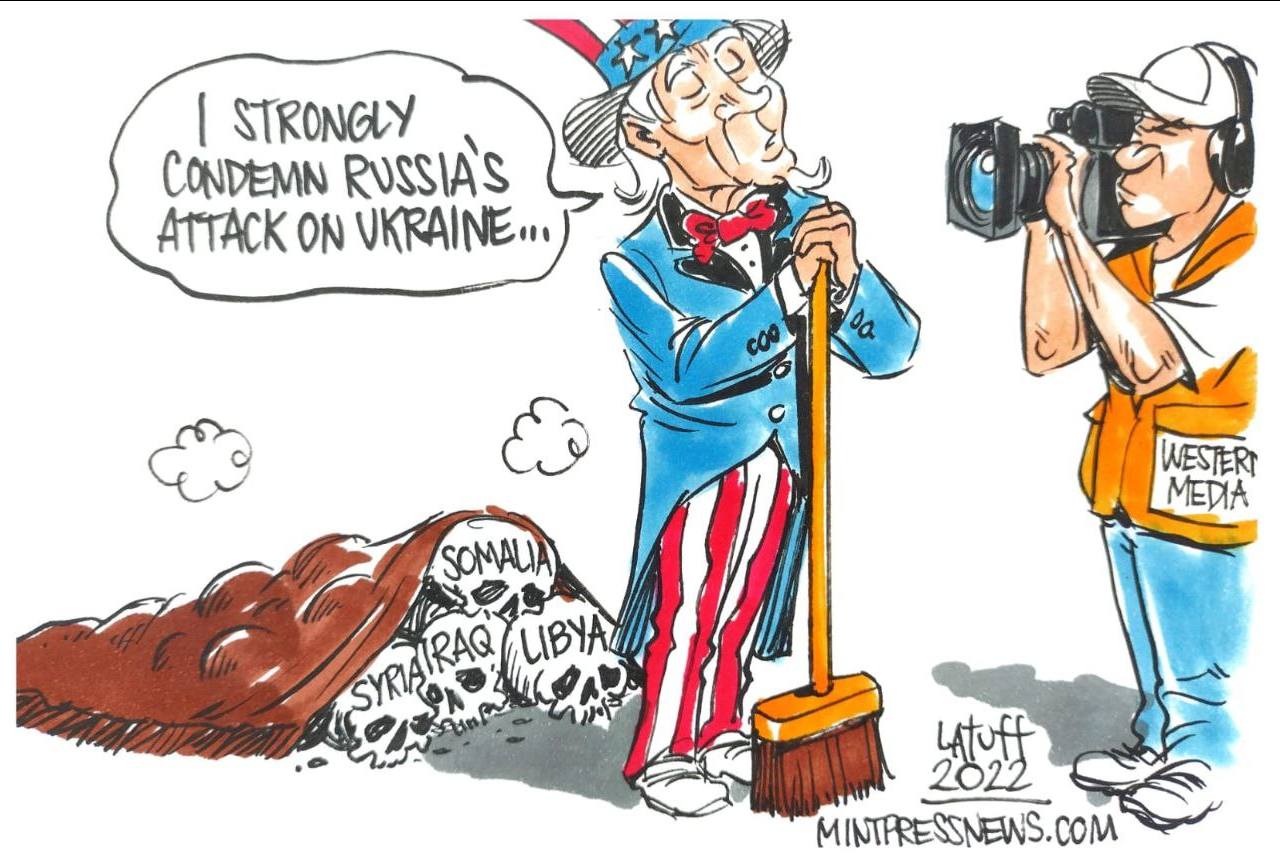 The West has taken an extreme stance against Russia over its invasion in Ukraine. This reaction exposes a high degree of hypocrisy considering that US-led wars abroad never received the punitive response they deserved.

If the current events in Ukraine have proven anything, it’s that the United States and its transatlantic partners are able to run roughshod across a shell-shocked planet – in Afghanistan, Iraq, Libya, and Syria, to name a few of the hotspots – with almost total impunity. Meanwhile, Russia and Vladimir Putin are being portrayed in nearly every mainstream media publication today as the second coming of Nazi Germany for their actions in Ukraine.

First let’s be clear about something. Hypocrisy and double standards alone do not provide justification for the opening of hostilities by any country. In other words, just because NATO-bloc countries have been tearing a path of wanton destruction around the globe since 2001 without serious consequences, this does not give Russia, or any country, moral license to behave in a similar manner. There must be a convincing reason for a country to authorize the use of force, thereby committing itself to what could be considered ‘a just war’. Thus, the question: Can Russia’s actions today be considered ‘just’ or, at the very least, understandable? I will leave that answer up to the reader’s better judgment, but it would be idle not to consider some important details.

Only to the consumers of mainstream media fast food would it come as a surprise that Moscow has been warning on NATO expansion for well over a decade. In his now-famous speech to the Munich Security Conference in 2007, Vladimir Putin poignantly asked the assembled global powerbrokers point blank, “why is it necessary to put military infrastructure on our borders during this [NATO] expansion? Can someone answer this question?” Later in the speech, he said that expanding military assets smack up to the Russian border “is not connected in any way with the democratic choices of individual states.”

Not only were the Russian leader’s concerns met with the predictable amount of disregard amid the deafening sound of crickets, NATO has gone on to bestow membership on four more countries since that day (Albania, Croatia, Montenegro, and North Macedonia). As a thought experiment that even a dolt could conduct, imagine Washington’s reaction if Moscow were building a continuously expanding military bloc in South America, for example.

The real cause for Moscow’s alarm, however, came when the US and NATO began flooding neighboring Ukraine with a dazzling array of sophisticated weaponry amid calls for membership in the military bloc. What on earth could go wrong? In Moscow’s mind, Ukraine was beginning to pose an existential threat to Russia.

In December, Moscow, quickly nearing the end of its patience, delivered draft treaties to the US and NATO, demanding they halt any further military expansion eastwards, including by the accession of Ukraine or any other states. It included the explicit statement that NATO “shall not conduct any military activity on the territory of Ukraine or other states of Eastern Europe, South Caucasus and Central Asia.” Once again, Russia’s proposals were met with arrogance and indifference by Western leaders.

While people will have varying opinions as to the shocking actions that Moscow took next, nobody can say they were not warned. After all, it’s not like Russia woke up on February 24 and suddenly decided it was a wonderful day to start a military operation on the territory of Ukraine. So yes, an argument could be made that Russia had concern for its own security as a justification for its actions. Unfortunately, the same thing may be more difficult to say for the United States and its NATO minions with regards to their belligerent behavior over the course of the last two decades.

Consider the most notorious example, the 2003 invasion of Iraq. This disastrous war, which the Western media hacks have chalked up as an unfortunate ‘intelligence failure’, represents one of the most egregious acts of unprovoked aggression in recent memory. Without delving too deep into the murky details, the United States, having just suffered the attacks of 9/11, accused Saddam Hussein of Iraq of harboring weapons of mass destruction. Yet, instead of working in close cooperation with the UN weapons inspectors, who were on the ground in Iraq attempting to verify the claims, the US, together with the UK, Australia, and Poland, launched a ‘shock-and-awe’ bombing campaign against Iraq on March 19, 2003. In a flash, over a million innocent Iraqis suffered death, injury, or displacement by this flagrant violation of international law.

The Center for Public Integrity reported that the Bush administration, in its effort to bolster public support for the impending carnage, made over 900 false statements between 2001 and 2003 about Iraq’s alleged threat to the US and its allies. Yet somehow the Western media, which has become the most rabid proliferator for military aggression bar none, failed to find any flaw in the argument for war – that is, until after the boots and blood were on the ground, of course.

It might be expected, in a more perfect world, that the US and its allies were subjected to some stiff sanctions in the wake of this protracted eight-year ‘mistake’ against innocents. In fact, there were sanctions, just not against the United States. Ironically, the only sanctions that resulted from this crazy military adventure were against France, a NATO member that had declined the invitation, together with Germany, to participate in the Iraqi bloodbath. The global hyper-power is not used to such rejection, especially from its purported friends.

American politicians, self-assured in their Godlike exceptionalism, demanded a boycott of French wine and bottled water due to the French government’s “ungrateful” opposition to war in Iraq. Other agitators for war betrayed their lack of seriousness by insisting that the popular menu item known as ‘French Fries’ be substituted with the name ‘Freedom Fries’ instead. So the lack of French Bordeaux, together with the tedious redrafting of restaurant menus, seems to have been the only real inconveniences the US and NATO suffered for indiscriminately destroying millions of lives.

Now compare this kid gloves approach to the US and its allies to the current situation involving Ukraine, where the scales of justice are clearly weighed down against Russia, and despite its not unreasonable warnings that it was feeling threatened by NATO advances. Whatever a person may think about the conflict now raging between Russia and Ukraine, it cannot be denied that the hypocrisy and double standards being leveled against Russia by its perennial detractors is as shocking as it is predictable. The difference today, however, is that bombs are going off.

Aside from the severe sanctioning of Russian individuals and the Russian economy, perhaps best summed up by the French economy minister, who said his country is committed to waging “a total economic and financial war on Russia,” there has been a deeply disturbing effort to silence news and information coming from those Russian sources that might give the Western public the option of seeing Moscow’s motivations. On Tuesday, March 1, YouTube decided to block the channels of RT and Sputnik for all European users, thereby allowing the Western world to seize another chunk of the global narrative.

Such a reckless approach, which leaves no room for debate, no room for discussion, no room for seeing Russia’s side in this extremely complex situation, only guarantees further standoffs, if not full-blown global war, further down the road. Unless the West is actively seeking the outbreak of World War III, it would be advisable to stop the hideous hypocrisy and double standards against Russia and patiently listen to its opinions and version of events (even ones presented by foreign media). It’s not as unbelievable as some people may wish to believe.

Robert Bridge is an American writer and journalist. He is the author of ‘Midnight in the American Empire,’ How Corporations and Their Political Servants are Destroying the American Dream. @Robert_Bridge. This article was originally published on Russia Today.