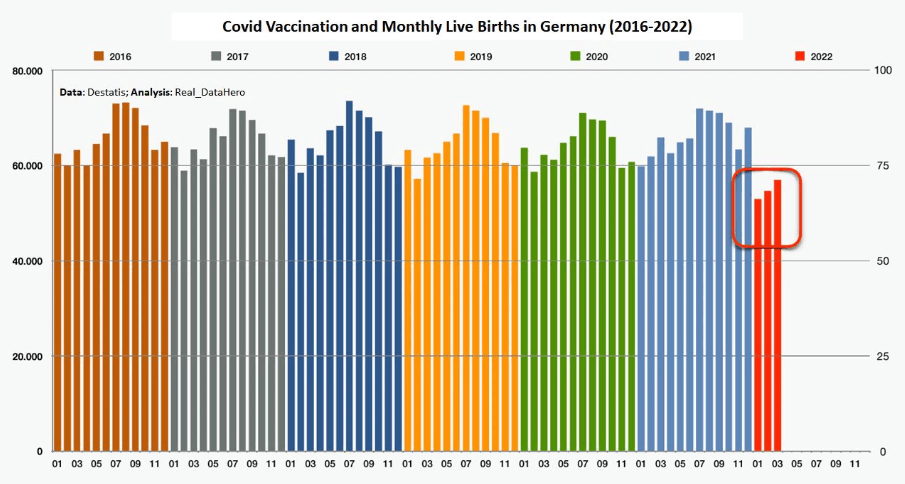 Germany reported a 13% decline in births between January and March 2022 compared to the same period in 2021.

In Switzerland, birth rates have also plummeted since the introduction of the covid vaccines.

Igor Chudov, the author of a popular covid newsletter wrote, “When expressed in “sigmas”, units of standard deviation, the 23.24% drop in the birth rate in Taiwan is a 26-sigma event! This is can be described as “unimaginable” in terms of the likelihood of happening due to random chance.”

In conclusion, data from around the world shows a substantial monthly decrease in birth rates from January 2022 to April 2022 compared to previous years.

Biodistribution studies show that Pfizer’s mRNA vaccine lipid nanoparticles do end up in the ovaries and testes and subsequent studies have shown that covid-19 and covid vaccines lower sperm counts.

Furthermore, the rate of fertility problems reported on the CDC’s VAERS database for the covid vaccines are astronomical.

Prior to the introduction of the mRNA vaccines, there were about 1,500 reports of fertility problems over the 31-year history of VAERS for all vaccines combined.

In the United Kingdom, there are more than 30,000 reports of menstrual changes after covid vaccinations.

Why are birth rates plummeting in the United Kingdom, Germany, Sweden, Netherlands, Switzerland, and Taiwan — nine months after the beginning of covid mass vaccinations?

Children are statistically at-or-near zero risk of being hospitalized or dying from covid-19.

The mass vaccination of children must stop now.

The Pfizer Presentation That Got Dr. Malone Kicked Off Twitter: Pfizer’s own vaccine trial data shows an INCREASED risk of all-cause illness and death for the vaccinated. Pfizer unblinded the trial, did not track any subclinical biomarkers, skipped testing of 3,410 participants with covid-19 symptoms, and reported a 12-year-old girl who had been paralyzed to a wheelchair as “functional abdominal pain”. Read more.

Dr. Clare Craig Exposes How Pfizer Twisted Their Clinical Trial Data for Young Children: 3,000 of 4,526 children did not complete the trial for children aged six months to four years old. Pfizer ignored 97% of the covid that occurred during the trial and compared three children in the vaccine arm to seven in the placebo arm. Read more.

Infertility: A Diabolical Agenda: CHD Films Presents — The chilling, harrowing story of how a World Health Organization (WHO) population control experiment, under the guise of a vaccination program, resulted in the sterilization of millions of women in Africa without their knowledge or consent. Watch here.