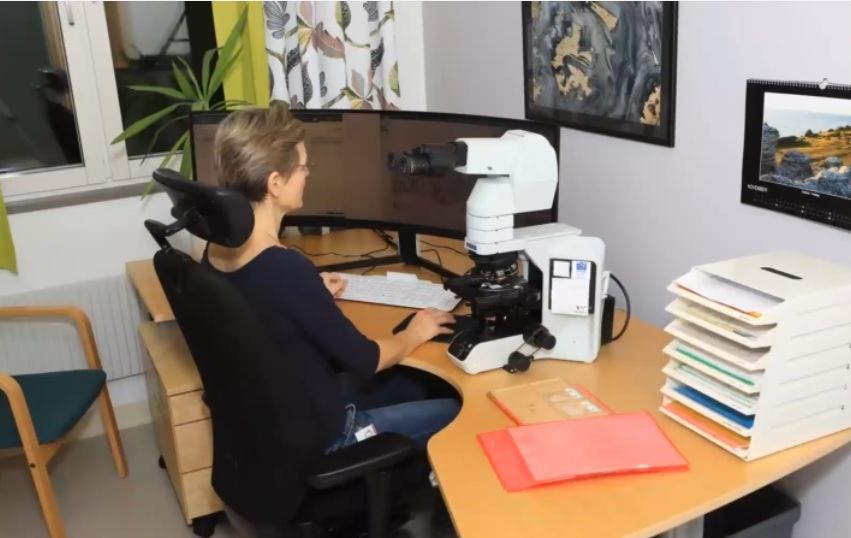 Rates of cancer have exploded following the COVID-19 mass vaccination programs, with doctors and scientists all over the world now sounding the alarm.

Just today a reader contacted us with the following tragic story:

My husband prior to the vaccine was fit and healthy, strong, active. We both had the vaccination on 12.11.2021. about 10 hours kater we spitted first swollen node in his left armpit. Doctors ignored the symptom. Then second node, third… With 6 swollen nodes he was diagnosed with Mantle cell lymphoma. He’s during very aggressive chemotherapy called Nordic regime. He’s only 36 in May, so he was 35 when it all has started. MCL affects people after 60 usually.

Before the vaccination our children brought from school many different viruses, from common flu, tummy bug, chicken pox, ear infections to covid.

My husband was totally fine that time. His immune system worked brilliantly during September and October when me and our daughters suffered from mentioned diseases. He was working and taking care of us at that time. If he would have MCL then he wouldn’t be able to fight all these viruses. Everything has changed within the hours from the first dose of Pfizer.

At first my husband was ignored by GP as he claimed it was typical side effect which should disappear. When more nodes started swilling gp still claimed we should wait yet in January my husband was advised not to have second dose of the vaccination due to the side effects.

In March I requested blood test to check whether it was cancer. Results returned completely fine. I immediately booked next blood test. Also returned completely fine. So without hesitation I booked appointment with go but this time I asked for different gp. During this appointment my husband was referred for ultrasound scan. From there to cancer clinic. 3 days later biopsy took place. Couple if days later we learnt the diagnosis mantle cell lymphoma.

At this stage we were told it has nothing to do with the vaccination, yet for months we were expected to wait for side effects to disappear.

Also, if the cancer is not in connection to vaccinate then how come my husband survived the 8 waves if different diseases starting from September ? In August we spent holidays in Scotland. Lots of walking and driving. My husband was in a very good shape.

Let me say it again, prior to the vaccination my husband was strong, fit, active and healthy.

Our life as a family has been literally ruined.

We cannot go anywhere, we can’t work, my husband us to weak, I have to care for him now and children. We are facing financial difficulties heading to a place where we won’t be able to cover winter bills.

MCL is incurable. Only treatable.

If we are lucky, we may be back to temporary normality by March/April 2023. MCL comes back. Noone knows when. Second time it hits stronger…

We can’t take girls for holidays, we can’t mix with other people as my husband’s immune system is compromised. I am on standby all the time as I may need to take him to hospital in emergency like it happened already. Most of days we travel to hospital anyway. Sometimes even twice a day.

I have never returned to myself after COVID and vaccination. Before I was very active and fit. Now Im not even at 50% of what I used to be.

Our children will never be vaccinated!

I did a search in the U.S. government Vaccine Adverse Events Reporting System (VAERS) to see how many cases of the most common cancers had been reported following COVID-19 vaccines, and it returned a result of 837 cases of cancer, including 88 deaths, 66 permanent disabilities, and 104 life threatening events. (Source.)

And this not an exhaustive list, as I tried to include ALL cancers listed in VAERS, but the database could not handle the query.

I listed the cases by age, and of the 837 cases, 375 of them had no recorded age, although often the age can be found in the description.

So I put those 375 cases on the first page of the results, and starting on the second page you can see how young some of these cancer patients are following COVID-19 vaccines. (Source.)

It begins with a 12-year-old girl and a 15-year-old boy, followed by many young adults in their 20s.

Using the exact same search terms for cancer, I then searched ALL FDA-approved vaccines for the previous 30 years and found only 140 cases of cancer reported. (Source.)

That result is for 360 months (30 years), whereas the 837 cases following the experimental COVID-19 vaccines were reported in just 20 months, since the roll out of the COVID-19 shots beginning in December of 2020.

A pathologist who lives in Sweden was just interviewed recently about the increasing rates of cancer she is seeing in her patients following the COVID-19 vaccines.

Her name is Dr. Ute Krueger, and the video is found on the Doctors For Covid Ethics Rumble Channel.

This is an amazing interview! Dr. Krueger is highly credentialed in her field, and yet few of her colleagues are willing to follow where the evidence leads, even though everyone is seeing a huge surge in cancer cases, and her reports to the Swedish Drug Administration have not been addressed. She states:

I studied medicine because I wanted to help people.

But now it feels like I am watching people being killed, and there’s little I can do.

The Exposé has also just published an excellent review of some of the scientific literature showing how the spike proteins are interfering with “the DNA repair mechanism in lymphocytes.”

The COVID-19 mRNA “Vaccines” cause Cancer; here’s the evidence…

The homologous recombination DNA repair pathway is one of the mechanisms that the body uses to stop your cells turning cancerous in response to environmental stress.

One of the most important components of this pathway is Tumor protein P53 (p53), the “guardian of the genome”. It protects our cells from cellular damage. Under cellular stress, p53 jumps into action, regulating gene expression to control DNA repair, cell division and cell death. It is the most commonly mutated gene in cancer.

In October 2021, two revered scientists, called Jiang and Mei, had a paper published, after peer review, in MDPI, showing that the SARS-Cov-2 spike protein obliterated the DNA repair mechanism in lymphocytes.

The viral spike protein was so toxic to this pathway that it knocked 90% of it out. If the whole spike protein got into the nucleus (in the ovaries), and enough of it was produced and hung around long enough before the body was able to get rid of it all, it would cause cancer. Fortunately, in the case of naturally infection, this is unlikely to occur.

“Fact checkers” said the viral spike protein doesn’t get in the nucleus despite the expert scientists showing that it absolutely does.

Public health authorities and regulators said the vaccinal spike protein doesn’t get in the nucleus despite the mRNA manufacturers submitting pictures of it doing so to them as part of their emergency use application.

OK, so it gets into the nucleus but the official narrative says it doesn’t stay in the body for more than a few hours. But, a huge study by one of the most respected molecular biology groups in the world at Stanford university⁴ showed that the mRNA (producing the vaccinal spike antigen) was still present and active in the body after 60 days.

Jiang and Mei, quite logically and reasonably, cautioned that the mRNA spike protein would likely have the same effect as the viral spike protein on p53 and therefore cause cancer.

Two months after this revelation was highlighted by my friend, Jikky the Mouse, the Jiang and Mei paper was retracted due to spurious “expressions of concern” (EOC) about the methods of the study despite them being standard practice.

Moreover, the authors of the EOC were Eric Freed, the head of the US National Institute of Health (NIH) that funded Moderna, the patent holder of the COVID mRNA toxshot⁵ and Oliver Shildgen, the actual editor of the journal that originally accepted the paper! And neither of them declared the conflicts of interest.

Well, despite the retraction, the spike protein circulating in large quantities, in the direct vicinity of the cell nucleus, for elongated periods of time, still has the potential to induce cancer in those cells (ovary, pancreas, breast, prostate, lymph nodes). These cancers can take years to develop and so it’s possible that we don’t see much of a safety signal for 5 or 10 years.