Prepare For Change
Home Hypnosis Unknown Drugs Given to Persecuted Citizens in China to Stop Them From... 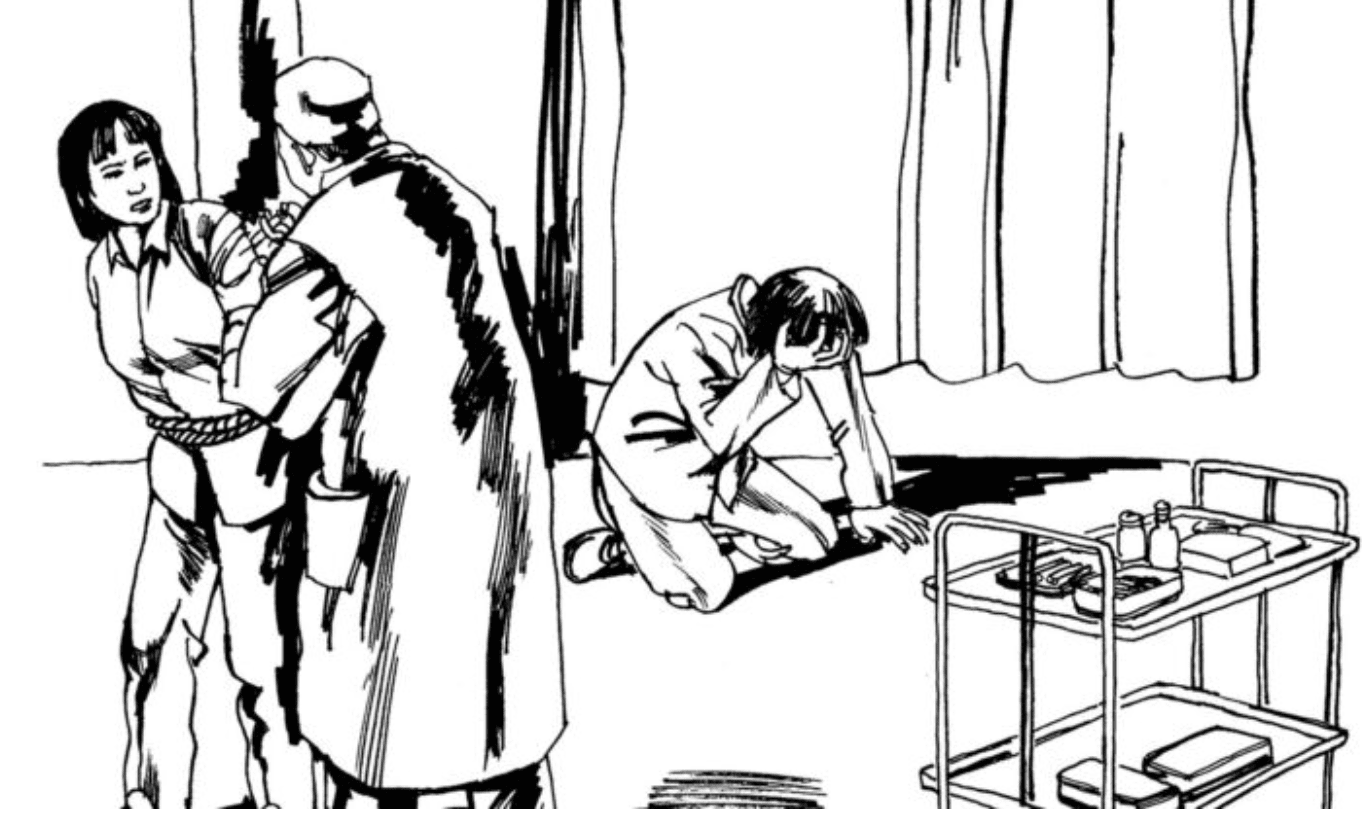 “You will no longer shout after I give you a shot,” said the director of the Hebei Provincial Brainwashing Center in China, while threatening a Falun Gong adherent who kept saying out loud, “Falun Gong is good!”

Hua Fengxiang was arrested for his belief in the persecuted spiritual practice of Falun Gong. Yuan Shuqian, who has been serving as the director of the brainwashing center since 2001, ordered his officers to stuff a towel in Hua’s mouth before forcibly injecting him with an unidentified drug. Shortly after the shot, Hua’s health deteriorated, his spine became distorted, his neck became stiff, and he had difficulty walking, reported Minghui.org, a U.S.-based nonprofit organization that provides firsthand information on the ongoing persecution of Falun Gong.

Falun Gong (also known as Falun Dafa) is a mind-body practice rooted in the universal principles of truthfulness, compassion, and tolerance. The officially atheist Chinese Communist Party (CCP) has been persecuting the practice since July 20, 1999. Over the past 23 years, tens of thousands of Falun Gong practitioners have been arrested, detained, tortured, and even killed for their organs. Adherents are routinely tortured in detention centers, brainwashing centers, and mental hospitals.

Over a decade ago, the U.S. Department of State expressed concerns over China’s “ankang” facilities, or psychiatric hospitals (the Chinese term ironically translates as “peace and health” facilities), which are under the direct administration of the Ministry of Public Security. The report stated that these “high-security psychiatric hospitals”—meant for the “criminally insane”—even housed Falun Gong practitioners, other underground religious believers, and political activists together with mentally ill patients. Those detained in these hospitals were allegedly “medicated against their will and forcibly subjected to electric shock treatment.”

Whether an individual is diagnosed with mental disorders, what medications he is given and how they are administered, and when he is released are all under police control.

China’s first Mental Health Code that came into effect on May 1, 2013, states that people with “severe symptoms” and those who present a “danger of harming others” can be forcibly detained in mental hospitals, according to the Minghui report titled “The 20-Year Persecution of Falun Gong in China.” The 437-page book, which extensively details the brutality faced by Falun Gong practitioners, says that the code doesn’t protect citizens from “being arbitrarily labeled as mentally ill,” and that there is a “huge gray area that police and relevant government agencies have exploited” in persecuting Falun Gong while deciding if any person is of any potential threat to the safety and security of others.

“There is no third-party oversight of ankang facilities. Police departments both administer ankang hospitals and decide who to take to these facilities. Whether an individual is diagnosed with mental disorders, what medications he is given and how they are administered, and when he is released are all under police control,” states the report.

Minghui.org has documented over 100 different torture methods used by the CCP to coerce Falun Gong adherents into renouncing their belief. Forced administration of unknown nerve-damaging drugs is one of the most common tools of persecution.

The side effects from the unidentified drugs include heart problems, stiffness of tongue, memory loss, numbness of body, damaging effects on the central nervous system, loss of speech, and vision problems, as reported in the few selected cases that follow.

Peng Yuxin, 55, from Hefei city, Anhui Province, was injected with toxic medications for a total of six times before his release from prison in 2020. He lost almost all his ability to speak, and could only utter a few words. Moreover, he could not write his own address. He nodded his head when asked if he was injected with drugs.

Liang Zhiqin, a Falun Gong adherent from Tangshan city, Hebei Province, was tied up and injected twice with toxic drugs when she was detained at the Tangshan city Ankang Hospital in 2000. She lost consciousness and had acute cardiac problems and chest pain after the first injection. Her memory became worse after she was released in September 2001. She often gave the wrong change to customers when helping at her family’s business. “I was on the verge of death,” Liang recalled. “I was in so much pain that my eyes could not even move. My tongue became rigid, and my mind was unclear.”

Yang Baochun, from Handan city, Hebei Province, was arrested in the winter of 2000. The guards at Handan Forced Labor Camp poured hot water on his feet after ordering him to stand barefooted in the snow. The torture resulted in an infection in his blistered leg and his right leg had to be amputated. The authorities covered up the incident saying Yang was insane and his infection was self-inflicted. To back their claims, he was sent to Ankang Mental Hospital in Feixiang County, where he was given food with unidentified drugs mixed in. He was released in 2004, but only to be arrested again in 2005; he was imprisoned and tortured at the Yongkang Mental Hospital, which left him truly insane.

Xu Guiqin, from Taian city, Shandong Province, was arrested in 2001 and sent to No. 1 Female Labor Camp in Jinan city. Two days before her release, she was beaten for several hours and forcibly injected with four bottles of drugs that damage the central nervous system, leading to numbness of the body, swelling of the face, severe memory loss, anorexia, and dizziness. When she was released, the guards told the family, “Watch out for her and don’t let her go by herself, or her life will be at risk.” However, she died nine days later due to failure of her nervous system.

Li Zhongming, from Luzhou vity, Sichuan Province, was saying out loud “Falun Dafa is good! Truthfulness, compassion, forbearance is good!” when she was arrested from her home in 2011. Her shouts attracted the attention of people, who saw police officers injecting something into Li’s arms. Immediately, she could not speak; her mouth and tongue became stiff as saliva dripped from her mouth.

Gao Yumin, a police officer from Fuxin city, Liaoning Province, was previously involved in persecuting Falun Gong practitioners. However, after he learned more about the spiritual system and the CCP’s propaganda against it, he started practicing it too; like any other adherent, he too was arrested and severely tortured. Two months before his 3 1/2-year term expired, he was injected with a high dose of nerve-damaging drugs, rendering his intelligence to that of a 3-year-old child. His family later found through the urine sample test that the concentration of the drug in his body was so high that it could poison him.

Uyghur men and women detained in Xinjiang re-education camps in China are forcibly given drugs that can negatively affect their fertility.

Omir Bekli, a Kazakhstan national born in Xinjiang, told The Epoch Times how Uyghur men, including himself, were forced to take a pill daily “to stop their sexual feelings forever.” Bekli, who was detained for six months in 2017, said that he “survived” by hiding the pill under his tongue and spitting it out later.

“That pill makes people seem crazy, insane, and as if they don’t know what they’re doing. They just do as they’re told. It’s as if they’re high. You can see they’re not normal,” he said.

Gulbakhar Jalilova, a Uyghur and Kazakhstan national who was detained for 15 months in an internment camp in Xinjiang, told The Epoch Times that one fellow inmate died after being injected.

“She was injected but her body was still warm, and other girls were ordered to wash her body. She just died like that in front of me,” she said.

Gulbakhar added that they were given unknown medicine every day and injected with a drug every month. “The injection makes you feel like you have no memory,” she said. “You don’t miss your family, you don’t feel like you want to get out. You feel nothing—it’s a very strange feeling.”

A house Christian from Sichuan Province was detained for 10 months in 2018, after the church was raided. While in detention, he was locked in solitary confinement and became suicidal, leading him to bang himself against the wall.

Once, when he was “groggy” and couldn’t open his eyes, a few police officers grabbed him and pinned him to the ground, he told Radio Free Asia (RFA). “They injected me with some drug, and brought me back to consciousness,” he said.

Human-rights activists such as lawyers have also been subjected to forced medications.

Jiang Tianyong, a prominent human rights lawyer in China, was forced to take an unidentified medication twice a day while detained in prison in 2018. His wife told RFA that the drugs had caused his memory to deteriorate. ChinaAid reported in its Annual Persecution Report 2020 that Jiang’s vision was also affected.