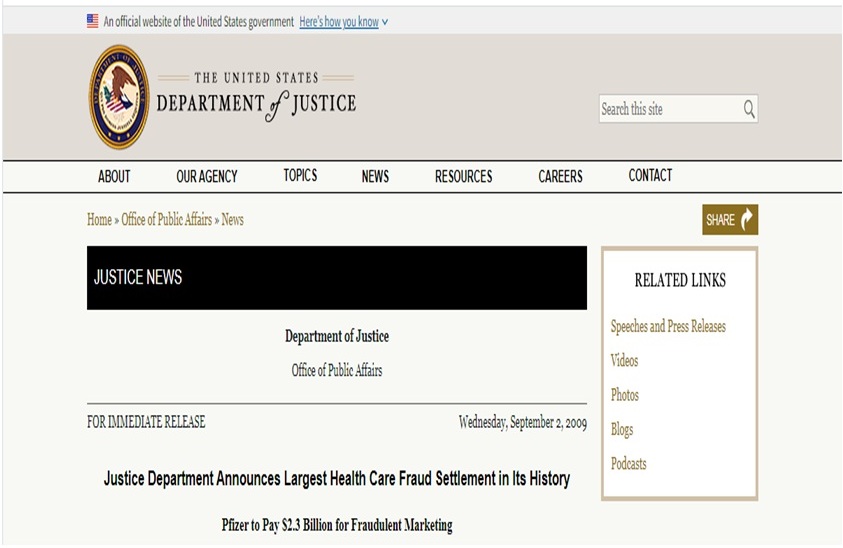 WASHINGTON – American pharmaceutical giant Pfizer Inc. and its subsidiary Pharmacia & Upjohn Company Inc. (hereinafter together “Pfizer”) have agreed to pay $2.3 billion, the largest health care fraud settlement in the history of the Department of Justice, to resolve criminal and civil liability arising from the illegal promotion of certain pharmaceutical products, the Justice Department announced today.

Pharmacia & Upjohn Company has agreed to plead guilty to a felony violation of the Food, Drug and Cosmetic Act for misbranding Bextra with the intent to defraud or mislead. Bextra is an anti-inflammatory drug that Pfizer pulled from the market in 2005. Under the provisions of the Food, Drug and Cosmetic Act, a company must specify the intended uses of a product in its new drug application to FDA. Once approved, the drug may not be marketed or promoted for so-called “off-label” uses – i.e., any use not specified in an application and approved by FDA. Pfizer promoted the sale of Bextra for several uses and dosages that the FDA specifically declined to approve due to safety concerns. The company will pay a criminal fine of $1.195 billion, the largest criminal fine ever imposed in the United States for any matter. Pharmacia & Upjohn will also forfeit $105 million, for a total criminal resolution of $1.3 billion.

In addition, Pfizer has agreed to pay $1 billion to resolve allegations under the civil False Claims Act that the company illegally promoted four drugs – Bextra; Geodon, an anti-psychotic drug; Zyvox, an antibiotic; and Lyrica, an anti-epileptic drug – and caused false claims to be submitted to government health care programs for uses that were not medically accepted indications and therefore not covered by those programs. The civil settlement also resolves allegations that Pfizer paid kickbacks to health care providers to induce them to prescribe these, as well as other, drugs. The federal share of the civil settlement is $668,514,830 and the state Medicaid share of the civil settlement is $331,485,170. This is the largest civil fraud settlement in history against a pharmaceutical company.

As part of the settlement, Pfizer also has agreed to enter into an expansive corporate integrity agreement with the Office of Inspector General of the Department of Health and Human Services. That agreement provides for procedures and reviews to be put in place to avoid and promptly detect conduct similar to that which gave rise to this matter.

“Today’s landmark settlement is an example of the Department of Justice’s ongoing and intensive efforts to protect the American public and recover funds for the federal treasury and the public from those who seek to earn a profit through fraud. It shows one of the many ways in which federal government, in partnership with its state and local allies, can help the American people at a time when budgets are tight and health care costs are increasing,” said Associate Attorney General Tom Perrelli. “This settlement is a testament to the type of broad, coordinated effort among federal agencies and with our state and local partners that is at the core of the Department of Justice’s approach to law enforcement.”

“This historic settlement will return nearly $1 billion to Medicare, Medicaid, and other government insurance programs, securing their future for the Americans who depend on these programs,”said Kathleen Sebelius, Secretary of Department of Health and Human Services”The Department of Health and Human Services will continue to seek opportunities to work with its government partners to prosecute fraud wherever we can find it. But we will also look for new ways to prevent fraud before it happens. Health care is too important to let a single dollar go to waste.”

“Illegal conduct and fraud by pharmaceutical companies puts the public health at risk, corrupts medical decisions by health care providers, and costs the government billions of dollars,” said Tony West, Assistant Attorney General for the Civil Division. “This civil settlement and plea agreement by Pfizer represent yet another example of what penalties will be faced when a pharmaceutical company puts profits ahead of patient welfare.”

“The size and seriousness of this resolution, including the huge criminal fine of $1.3 billion, reflect the seriousness and scope of Pfizer’s crimes,” said Mike Loucks, acting U.S. Attorney for the District of Massachusetts. “Pfizer violated the law over an extensive time period. Furthermore, at the very same time Pfizer was in our office negotiating and resolving the allegations of criminal conduct by its then newly acquired subsidiary, Warner-Lambert, Pfizer was itself in its other operations violating those very same laws. Today’s enormous fine demonstrates that such blatant and continued disregard of the law will not be tolerated.”

“Although these types of investigations are often long and complicated and require many resources to achieve positive results, the FBI will not be deterred from continuing to ensure that pharmaceutical companies conduct business in a lawful manner,” said Kevin Perkins, FBI Assistant Director, Criminal Investigative Division.

“This resolution protects the FDA in its vital mission of ensuring that drugs are safe and effective. When manufacturers undermine the FDA’s rules, they interfere with a doctor’s judgment and can put patient health at risk,” commented Michael L. Levy, U.S. Attorney for the Eastern District of Pennsylvania. “The public trusts companies to market their drugs for uses that FDA has approved, and trusts that doctors are using independent judgment. Federal health dollars should only be spent on treatment decisions untainted by misinformation from manufacturers concerned with the bottom line.”

“This settlement demonstrates the ongoing efforts to pursue violations of the False Claims Act and recover taxpayer dollars for the Medicare and Medicaid programs,” noted Jim Zerhusen, U.S. Attorney for the Eastern District of Kentucky.

“This historic settlement emphasizes the government’s commitment to corporate and individual accountability and to transparency throughout the pharmaceutical industry,” said Daniel R. Levinson, Inspector General of the United States Department of Health and Human Services. “The corporate integrity agreement requires senior Pfizer executives and board members to complete annual compliance certifications and opens Pfizer to more public scrutiny by requiring it to make detailed disclosures on its Web site. We expect this agreement to increase integrity in the marketing of pharmaceuticals.”

“The off-label promotion of pharmaceutical drugs by Pfizer significantly impacted the integrity of TRICARE, the Department of Defense’s healthcare system,” said Sharon Woods, Director, Defense Criminal Investigative Service. “This illegal activity increases patients’ costs, threatens their safety and negatively affects the delivery of healthcare services to the over nine million military members, retirees and their families who rely on this system. Today’s charges and settlement demonstrate the ongoing commitment of the Defense Criminal Investigative Service and its law enforcement partners to investigate and prosecute those that abuse the government’s healthcare programs at the expense of the taxpayers and patients.”

“Federal employees deserve health care providers and suppliers, including drug manufacturers, that meet the highest standards of ethical and professional behavior,” said Patrick E. McFarland, Inspector General of the U.S. Office of Personnel Management. “Today’s settlement reminds the pharmaceutical industry that it must observe those standards and reflects the commitment of federal law enforcement organizations to pursue improper and illegal conduct that places health care consumers at risk.”

These are far from isolated examples of deceit. There are myriad instances of unabashed deception occurring in the pharma-funded media and technosphere. You’re right in that bots are a concern, but not in the way the propagandists are telling you. Rather, BigPharma fabrications of supposedly personal anecdotes are being propagated verbatim across thousands of social media accounts, and influencers are being paid to prop up a methodically crafted yet eminently fragile narrative that cannot survive unimpeded speech.

Also by the award-winning Mary Beth Pfeiffer, this heavily documented article dispels many of the falsehoods about ivermectin BigPharma has been cropdusting the public mind with. Here is another overview of the scientific literature by Dr. Colleen Huber, NMD.

A PubMed search of ivermectin currently returns 9,085 results. Do you think there would be more than 9,000 peer-reviewed journal articles on a horse dewormer? Antibiotics are used by veterinarians, too—who in their right mind would deny the efficacy of antibiotics for humans because of that?

Add COVID to the ivermectin PubMed search, and you get 296 results as of this writing—many documenting the extraordinary potential and success of treating COVID patients with ivermectin.1

In addition to inspecting the peer-reviewed literature, I recommend watching videos by credible scientists and medical professionals who are following the ethical demands of their profession and genuinely trying to discover the facts rather than serving as propaganda dissemination machines.

Dr. Mobeen Syed, for instance, examines the peer-reviewed literature and often draws helpful illustrations to walk viewers through the findings at a granular level. His videos are aimed at medical students, but because of that, he tends to delve deeper into the science than most. Here is Dr. Syed’s YouTube channel.

You won’t find his videos on ivermectin there, though, because, as I hope you now realize, there is a media/Big Tech blackout on scientific facts that interfere with their disinformation campaigns. You can find those videos by going to his Odysee channel and typing “ivermectin” into the search. This video on Ivermectin in Action offers a quick overview to help you understand how it can be used to combat SARS-CoV-2.