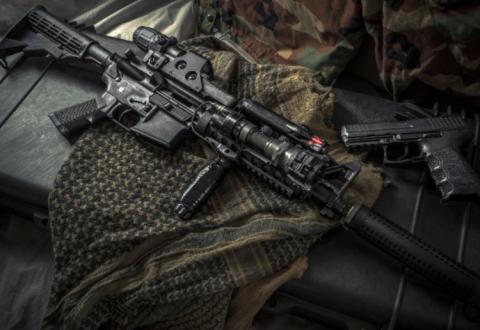 But a detailed review of the data demonstrates that the ban had no real benefits whatsoever, and neither did it lessen the frequency of major shootings.

What Is an Assault Weapon?

had the ability to accept a detachable magazine and possessed two of the following five features: (1) a folding or telescopic stock; (2) a pistol grip that protrudes conspicuously beneath the action of the weapon; (3) a bayonet mount; (4) a flash suppressor or threaded barrel designed to accommodate a flash suppressor; or (5) a grenade launcher.

This definition permits some adjustments to be made to rifles, such as an AR-15, that would make them completely legal (or “compliant”). Rifles that comply must have a fixed stock. Stocks cannot be telescopic or folding. A pistol grip is incompatible with a compliant rifle. Compliant rifles typically have a stock that has additional material added to it, so the pistol grip is attached to the stock or is extended far enough to prevent the shooter from wrapping around it with their thumb. The maximum number of rounds the rifle’s magazine can hold is 10. Any more than that is regarded as a high-capacity magazine. The rifle may not have a flash suppressor.

Many creative minds have discovered countless ways to transform basic AR-style rifles into completely compliant weapons. Today, several states have their own assault weapons bans with similar or identical provisions as the 1994 federal ban. In these states, the ownership of AR-15s and such is not at all uncommon. The same went for gun owners during the federal ban from 1994–2004.

The reality of compliant assault weapons is a strong indicator that the assault weapons ban did not work, outside of some inconveniences for gun owners. Any owner could easily convert a compliant rifle into a fully functional (and illegal) one using minimal tools and labor. And many, including mass shooters, take advantage of this. The 1994 ban led to a sharp increase in the demand for assault weapons, which initially increased prices. But after an increase in production, prices began to fall to their previous state. A 2002 study showed:

In the short-term, the federal AW ban reduced the availability of AWs to criminal users by increasing the cost of these weapons in primary and, presumably, secondary markets. However, the ban also stimulated production increases for AWs and legal substitute models, resulting in a post-ban decline in prices.

Proponents of a renewed ban completely overlook the rise in the ownership of assault weapons both before and after the 1994 ban. Any positive benefits cited by Biden and other politicians and talking heads are seriously called into question in light of this fact.

Did the Ban Decrease Mass Shootings?

When we closely examine the facts, Biden’s assertion that the ban will reduce the number of mass shootings is shown to be, to put it mildly, an excessive exaggeration. It is safe to assume that Biden derived this claim from a 2019 study that references the Mother Jones mass shootings database , or possibly he obtained it directly from Mother Jones. Either way, there are numerous flaws in citing this data as evidence. The methodology Mother Jones utilized to create their dataset on mass shootings and the conclusions that were made using this data have garnered criticism from criminologists such as Grant Duwe, who points to underreporting problems and says that “the Mother Jones list relied exclusively on news reports as a source of data, and news coverage tends to be less accessible for the older cases.”

He anchored the hunt for more in-depth news reporting on mass homicides in his own study of homicide using the FBI’s Supplementary Homicide Reports (SHR) data. The SHR data has several shortcomings, but it is the most complete homicide dataset currently accessible that sheds light on, among other things, when and where the majority of mass shootings have occurred in the United States. Duwe’s research revealed that mass shootings are “roughly as common now as they were in the 1980s and ’90s.”

But what about the frequency of assault weapons used in mass shootings? Did that change? Economist John R. Lott says: “There was no drop in the number of attacks with assault weapons during the 1994 to 2004 ban. There was an increase after the ban sunset, but the change is not statistically significant.”

Did the Ban Decrease Gun Homicides?

Assault rifles (and rifles in general) are very rarely used in gun crimes, so we would not expect to see any significant decrease in gun homicides or gun crimes due to the 1994 ban. Multiple studies have been done examining the effects of the ban on gun homicides and the results are generally inconclusive. A 2016 review published in JAMA found that four different studies, “do not provide evidence that the ban was associated with a significant decrease in firearm homicides.”

Between 1991, when violent crime reached an all-time high, and 2017, the country’s overall violent crime rate decreased by 47 percent, with a murder rate decline of 34 percent. Meanwhile, it appears foolish to attempt to count the almost two hundred million new firearms purchased by Americans, including the more than twenty million AR-15s and the hundreds of millions of “large” pistol and rifle magazines.

The assumption that the 1994 assault weapons prohibition was successful in lowering gun homicides, mass shootings, or even the possession of assault weapons is not backed by strong evidence. Most likely, those who advocate for the ban’s reintroduction are unaware of the compelling evidence against the prohibition, whether on purpose or accidentally. When the police and ATF start enforcing a new ban, there may even be an uptick in violence.